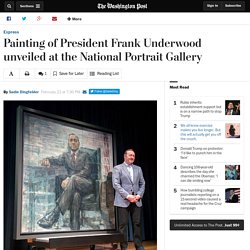 (Sadie Dingfelder/For Express) Presidential portraits are usually revealed after a president has left office, but the Smithsonian National Portrait Gallery made an exception today when it unveiled a painting of Francis J. “Frank” Underwood, the fictional president played by Kevin Spacey on the Netflix series, “House of Cards.” “Since Francis Underwood doesn’t believe in term limits, I see no reason why it shouldn’t be unveiled now,” Spacey said at a news conference. The larger-than-life painting by British artist Jonathan Yeo shows an imperious Underwood seated in the Oval Office.

“I think that when it’s hung at the right height, you may wonder if I’m about to kick you in the face — which seems appropriate for this particular character,” Spacey said. “Unless it’s borrowed from the gallery by the next [fictional] president,” Yeo said. Jonathan Yeo (@RealJonathanYeo) @jonathanyeo. It might be Washington's Birthday, but I am the Daddy of Our Country. House of art: portrait of Kevin Spacey as Frank Underwood hung in Washington. George Washington, founding father, is out. 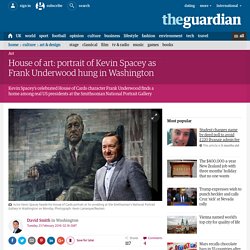 Francis J “Frank” Underwood, consummate schemer is in. A celebrated full-length portrait of America’s first president, painted by Gilbert Stuart in 1796, will be removed from the Smithsonian National Portrait Gallery next week to be treated by conservation experts. It will be absent for 18 months. But by coincidence, a new president is about to be hung on the gallery’s walls.

Underwood is the fictional commander-in-chief played with ratlike cunning by Kevin Spacey in the hit political television drama House of Cards. A 6ft-square portrait of Spacey as Underwood, painted by British artist Jonathan Yeo, was unveiled at the gallery in Washington on Monday night, coinciding with the launch of House of Cards’ fourth season, which premieres on Netflix on Friday 4 March. The section is one of two official national collections of presidential portraits (the other belongs to the White House). “Naked,” Yeo interjected, to laughter. The National Portrait Gallery now has a painting of Frank Underwood. Kevin Spacey's Frank Underwood is only the fictional president in Netflix's House of Cards, but it increasingly feels like the pretend politician is bleeding through into the real world. 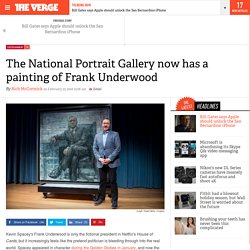 Spacey appeared in character during the Golden Globes in January, and now the Machiavellian monster has his portrait hung alongside actual presidents', in the Smithsonian's National Portrait Gallery. The 6-foot picture, painted by British artist Jonathan Yeo, will hang in the gallery's entrance, not far from its "America's Presidents" section. Yeo's treatment pictures Underwood in shades of gray, with lines of darkness obscuring the Oval Office, hinting at TV static and the character's fictional background. In the middle, Spacey's pugnacious face stares at the viewer, in much the same way it does during his to-camera interludes in House of Cards. House of Cards: Frank Underwood portrait unveiled at Smithsonian National Portrait Gallery. President Frank Underwood has finally joined the ranks of fellow American commanders-in-chief. 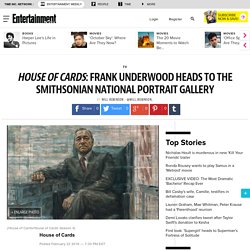 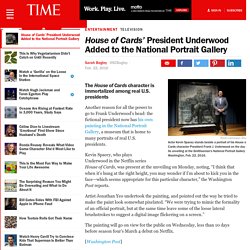 Kevin Spacey, who plays Underwood in the Netflix series House of Cards, was present at the unveiling on Monday, noting, “I think that when it’s hung at the right height, you may wonder if I’m about to kick you in the face—which seems appropriate for this particular character,” the Washington Post reports. Artist Jonathan Yeo undertook the painting, and pointed out the way he tried to make the paint look somewhat pixelated. “We were trying to mimic the formality of an official portrait, but at the same time leave some of the loose lateral brushstrokes to suggest a digital image flickering on a screen.” The painting will go on view for the public on Wednesday, less than 10 days before season four’s March 4 debut on Netflix. National Portrait Gallery Unveils Painting Of President Frank Underwood.

(Photo by Christina Sturdivant) Breaking the rules is routine for Francis Underwood, the lead character of Netflix’s House of Cards. 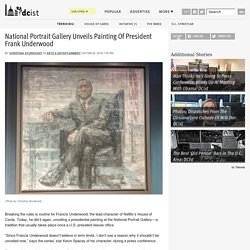 Today, he did it again, unveiling a presidential painting at the National Portrait Gallery—a tradition that usually takes place once a U.S. president leaves office. “Since Francis Underwood doesn't believe in term limits, I don't see a reason why it shouldn’t be unveiled now,” says the series’ star Kevin Spacey of his character, during a press conference. The portrait is a collaboration between British artist Jonathan Yeo and the museum, which houses the only complete collection of presidential portraits outside of the White House. Yeo’s previous sitters range from political figures such as British Prime Minister David Cameron and Prince Philip to actors including Dennis Hopper and Nicole Kidman. He’s also painted Spacey before, depicting the actor as Shakespeare's Richard III, which was displayed at the National Portrait Gallery in London. If 'House of Cards' was written by innocent little kids. 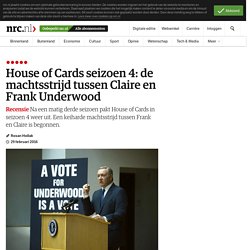 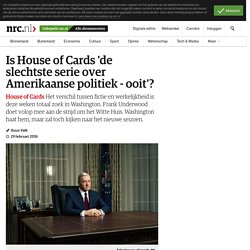 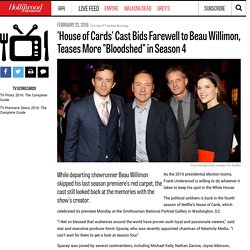 The political antihero is back in the fourth season of Netflix’s House of Cards, which celebrated its premiere Monday at the Smithsonian National Portrait Gallery in Washington, D.C. “I feel so blessed that audiences around the world have proven such loyal and passionate viewers,” said star and executive producer Kevin Spacey, who was recently appointed chairman of Relativity Media.

“I can’t wait for them to get a look at season four.” Spacey was joined by several castmembers, including Michael Kelly, Nathan Darrow, Jayne Atkinson, Elizabeth Marvel, Derek Cecil and new addition Neve Campbell. Beau Willimon, creator and now-former showrunner, was absent from the red carpet, although the cast gushed over his creativity and vision for House of Cards as this season marked his last with the drama.

Everything hinges on the next few minutes. All my months of planning. Every move I've made. All according to plan. Every episode of #HouseofCards now available in India. @johnkeypm the President will see you now. A message from President Underwood to the people of Brazil. .@TurnbullMalcolm I admire your methodology, Prime Minister. If you don't like how the table is set, turn over the table. @NetflixIT il momento non è ancora arrivato. Ma siate forti. Nous sommes prêts, Monsieur le Président. #HouseOfCards, saisons 1, 2, 3... et 4, est #DispoSurNetflix ! We have all eventualities covered. @HouseofCards #NowOnNetflixANZ. @sensacionalista Não queira ter seu acesso de imprensa bloqueado, meu caro. @sofoot La loyauté, ça se récompense. @NetflixFR. @SkyDeutschland @NetflixDE Die Nähe zur Macht täuscht manchen Menschen vor, sie könnten sie ausüben. I am endorsing @TedCruz. Ted is a consistent, principled conservative who has shown he can unite the party. .@JebBush Let's see how this plays out.

Can we make them disappear? We're paying you to clean cars, not read the paper. @JohnKingCNN There are ways to change the equation. @SteveTVNews Keep up the fine work, Steve. @travislylesnews Precisely. @TonyTharakan @netflix_india We've been expecting you, Tony. This level of dedication has not gone unnoticed. @politico Avoid wars you can't win.