Rhodamine B. An example of Beer–Lambert law, a green laser lighting in a solution of Rhodamine 6B, the beam becomes weaker as it travels through the dye. 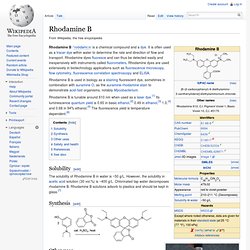 Rhodamine B /ˈroʊdəmiːn/ is a chemical compound and a dye. It is often used as a tracer dye within water to determine the rate and direction of flow and transport. Rhodamine dyes fluoresce and can thus be detected easily and inexpensively with instruments called fluorometers. Rhodamine dyes are used extensively in biotechnology applications such as fluorescence microscopy, flow cytometry, fluorescence correlation spectroscopy and ELISA. Brains In Jars » Build Log: Shaken Granular Laser. Completed enclosures Update: Someone translated this post to Russian. 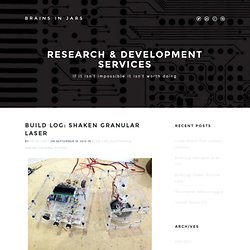 Update: I have confirmed that the output is still well within the spontaneous emission range and I am doubtful I can build an exciter with enough power. Embedder's life. Fuse bits aren’t that scary « Embedder's life. I often find that lock and fuse bits of AVR MCUs are somewhat scary to newbies and even rather skilled ones. 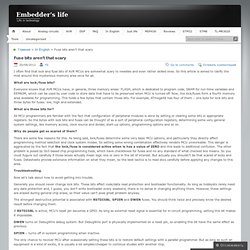 So this article is aimed to clarify the mist around this mysterious memory area once for all. What are lock/fuse bits? Everyone knows that AVR MCUs have, in general, three memory areas: FLASH, which is dedicated to program code, SRAM for run-time variables and EEPROM, which can be used by user code to store data that have to be preserved when MCU is turned off. Now, the lock/fuses form a fourth memory area available for programming. This holds a few bytes that contain those bits. What are those bits for? All MCU programmers are familiar with the fact that configuration of peripheral modules is done by setting or clearing some bits in appropriate registers.

Why do people get so scared of them? There are some few reasons for this. Troubleshooting. Now let’s talk about how to avoid getting into trouble. TTL-controlled Laser Diode Driver. Updated schematics. Elabz.com TTL-Controlled Laser Diode Driver During the course of my DIY laser cutter project I needed a laser diode driver that I could control with a CNC software, such as EMC2.

I’ve already made an attempt to build one based on Linear Technology’s LT1121 voltage regulator with Enable input but the driver design that came out was not exactly successful So, I took another stub at it … I have to admit, it was a pretty silly move to try designing an analog circuit based on Linear Technology device and not use their own free LTSpice circuit simulation software.

I was at some point deterred by the fact that it’s a Windows software but turns out it runs just fine under Wine and it was a rather easy simulation at that. Here is the Spice model of the laser diode driver I made. Laser Diode Driver Basics. Power: Power must be provided to the control electronics and current source. 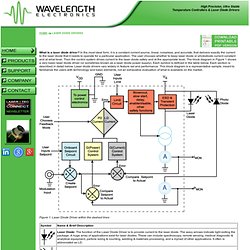 This can take the form of a DC power supply (some drivers use single supply inputs, others use dual supplies), or an AC input connector and cable. In some cases, where higher voltage is required to the laser diode, separate DC power supply inputs may be available to power the control electronics from a low +5 V supply and the laser diode from a higher voltage supply. What is the difference between an instrument, a module, and a component? Usually price, feature set, and size. Laser driver - It can be done. Blue Laser Pointer 1 Watt. 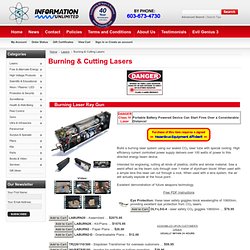 But it's also available here separately if you need just the tube itself, for building your own design or as a replacement. High efficiency laser diodes can produce up to 2 watts at wavelengths of .6 to over 1 micron, multi or single mode. UV Lasers/Ultraviolet Lasers (Violet laser ) Laser Pointer- Warnlaser.com. 405nm Razor Series Laser The breakthrough application in the micro-electronics industry of near UV lasers. 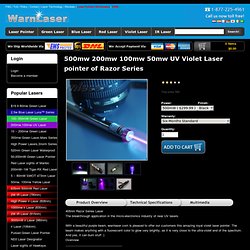 With a beautiful purple beam, warnlaser.com is pleased to offer our customers this amazing royal violet laser pointer. The beam makes anything with a fluorescent color to glow very brightly, as it is very close to the ultra-violet end of the spectrum. And yes, it can burn stuff :) Overview _________________________________ The Razor series is warnlaser.com's new series of violet lasers. The power is supplied by two AAA batteries /500mW with CR123A and uses the newest micro-electronics technology.

Why Near-UV? What sets the Near-UV spectral region appart is the subtlety (and complexity) of the light-matter interactions indigenous to the realm. Laser cutting vs. water jet cutting - standard metal cutting processes. 445nm 1W High Power Portable Blue Laser Pointer. Our new« Luna™ » Series brings up the Standards in the Laser Technology. 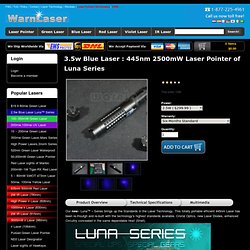 This totally portable efficient 445nm Laser has been re-thoutgh and re-built with the technology's highest standards available. Cristal Optics, new Laser Diodes, enhanced Circuitry concealed in the same dependable Host (Shell). The new « Luna™ » Series is one of our proudest achievement in terms of controlling Power and Wavelength. This Pure 2000mW of Blue Lasing Power, can pop balloons, burn through electrical tape, of course, but it can do so much more. You don't need 2000mW to pop balloons!

It can light wooden (and paper) matches by the base, light up cigarettes, carve wood (1500mW and up), and really make a difference among the other 445nm Lasers. However, you have to remember one thing. If, on the other hand, you're looking for Burning Power, THIS is your Laser for you! Food Pyramid Submissions (Raw Image) - StumbleUpon.