A free and global meeting place for readers and writers from all over the planet. People from several continents have collaborated on this initiative. All readers can read and download free books on this site. This platform allows writers to participate in freeditorial contest. You can also submit a book or article to sell the publishing rights. 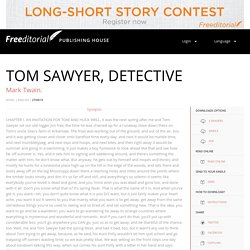 AN INVITATION FOR TOM AND HUCK WELL, it was the next spring after me and Tom Sawyer set our old nigger Jim free, the time he was chained up for a runaway slave down there on Tom's uncle Silas's farm in Arkansaw. The frost was working out of the ground, and out of the air, too, and it was getting closer and closer onto barefoot time every day; and next it would be marble time, and next mumbletypeg, and next tops and hoops, and next kites, and then right away it would be summer and going in a-swimming. It just makes a boy homesick to look ahead like that and see how far off summer is. Yes, and it sets him to sighing and saddening around, and there's something the matter with him, he don't know what. The Last Man: A science fiction by Mary Shelley. I VISITED Naples in the year 1818. 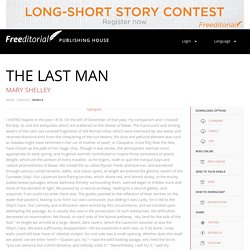 On the 8th of December of that year, my companion and I crossed the Bay, to visit the antiquities which are scattered on the shores of Baiae. The translucent and shining waters of the calm sea covered fragments of old Roman villas, which were interlaced by sea-weed, and received diamond tints from the chequering of the sun-beams; the blue and pellucid element was such as Galatea might have skimmed in her car of mother of pearl; or Cleopatra, more fitly than the Nile, have chosen as the path of her magic ship.

Though it was winter, the atmosphere seemed more appropriate to early spring; and its genial warmth contributed to inspire those sensations of placid delight, which are the portion of every traveller, as he lingers, loath to quit the tranquil bays and radiant promontories of Baiae. Emily in New Moon. Emily in new moon is delightful, charming and intriguing fiction book, which would definitely put you in to Emily’s shoes .Emily in new moon written by L M Montgomery who is a fiction writer born in Clifton, prince Edward island. 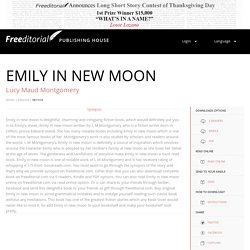 She has many notable books including Emily in new moon which is one of the most famous books of her. Montgomery’s work is also studies by scholars and readers around the world. L M Montgomery’s ‘Emily in new moon’ is definitely a source of inspiration which revolves around the character Emily who is adopted by her mother’s family at new moon as she loses her father at the age of seven. The Secret Power: A Metaphysical Catholic Science Fiction. A Letter to an American by Victor Saltero. LETTERS TO AN AMERICAN: WHY ARE YOU HATED? 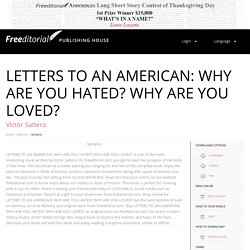 WHY ARE YOU LOVED? Is one of the most interesting novel written by Victor Saltero. On freeditorial.com you get to read the synopsis of the book in few lines. This would act as a trailer leaving you longing for the rest of the complete book. Enjoy the taste of literature in fields of History, politics, Liberation movements along with spices of women and sex. Desert Gold: A historic masterpiece by Zane Grey. Desert gold is most thrilling, exhilarating and fascinating book which neatly tied beginning and end. 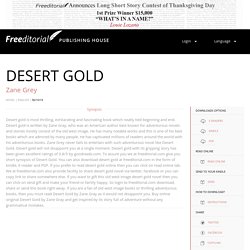 Desert gold is written by Zane Gray, who was an American author best known for adventurous novels and stories mostly consist of the old west image. He has many notable works and this is one of his best books which are admired by many people. He has captivated millions of readers around the world with his adventurous books. Zane Grey never fails to entertain with such adventurous novel like Desert Gold. Desert gold will not disappoint you at a single moment. The Last Man: A science fiction by Mary Shelley. Lost Pueblo: A Novel by Zane Grey. Lost Pueblo is a mixture of romance and adventure which engages you till end and doesn’t bore you. 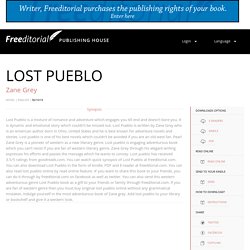 It is dynamic and emotional story which couldn’t be missed out. Lost Pueblo is written by Zane Grey who is an American author born in Ohio, United States and he is best known for adventure novels and stories. Lost pueblo is one of his best novels which couldn’t be avoided if you are an old west fan. Pearl Zane Grey is a pioneer of western as a new literary genre. Lost pueblo is engaging adventurous book which you can’t resist if you are fan of western literary genre.