Insider Trades - OMIDYAR PIERRE M. EDGAR Online: Get a Free Trial to EDGAR Online Premium | Full text Search * Indicates that some (or all) shares are held indirectly (e.g. in a trust, by a spouse, etc.) 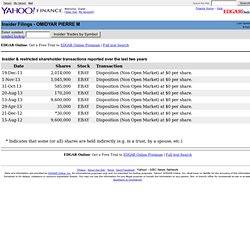 Search Historical SEC EDGAR Archives. Biography andimage Pierre Morad Omidyar. Pierre Omidyar (pierre) Omidyar focus is on strengthening MARKETS, NOT "philanthropy" or social change. Can't Get a Grip on Omidyar Philanthropy? You're Not Alone, So Take This Guided Tour - Tech Philanthropy. More than just about any other philanthropists, Pierre and Pam Omidyar have blurred the lines between their non-profit giving, and their for-profit investments, which can make it even more difficult to assess their giving than it otherwise would be. 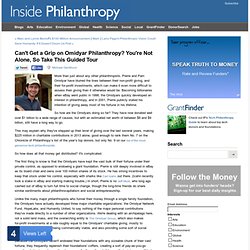 Becoming billionaires when eBay went public in 1998, the Omidyars quickly developed an interest in philanthropy, and in 2001, Pierre publicly stated his intention of giving away most of his fortune in his lifetime. So how are the Omidyars doing so far? They have now donated well over $1 billion to a wide range of causes, but with an estimated net worth of between $8 and $9 billion, still have a long way to go. This may explain why they've stepped up their level of giving over the last several years, making $225 million in charitable contributions in 2013 alone, good enough to rank them No. 7 on the Chronicle of Philanthropy’s list of the year’s top donors, but only No. 9 on our list of the most generous tech philanthropists.

eBay Shrugged: Pierre Omidyar believes there should be no philanthropy without profit. By Mark Ames On May 31, 2014 “I had a long debate with Pierre,” [Nobel Peace Prize winner] Yunus told me, referring to Omidyar. 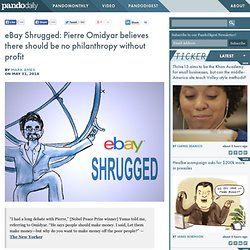 “He says people should make money. I said, Let them make money—but why do you want to make money off the poor people?” — The New Yorker This week, India’s newly-elected ultranationalist leader Narendra Modi unveiled his cabinet, three-quarters of whom come from a fascist paramilitary outfit, the RSS (Rashtriya Swayamsevak Sangh) — including one minister accused by police last year of inciting deadly Hindu-Muslim violence that left over 50 dead. The RSS was founded in 1925 by open admirers of Mussolini and Hitler; in 1948, an RSS member assassinated pacifist Mahatma Gandhi. Earlier this week, Pando reported that Modi’s election received help from unlikely sources in Silicon Valley including Google, and to a much more serious extent, Omidyar Network, the philanthropy fund of eBay billionaire and First Look publisher Pierre Omidyar. 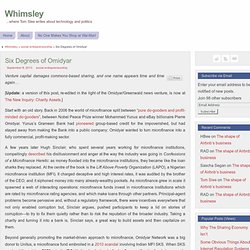 At the centre of the book is the Lift Above Poverty Organization (LAPO), a Nigerian microfinance institution (MFI). It charged deceptive and high interest rates, it was audited by the brother of the CEO, and it siphoned money into many already-wealthy pockets. As microfinance grew in scale it spawned a web of interacting operations: microfinance funds invest in microfinance institutions which are rated by microfinance rating agencies, and which make loans through other partners. Beyond generally promoting the market-driven approach to microfinance, Omidyar Network was a big donor to Unitus, a microfinance fund embroiled in a 2010 scandal involving Indian MFI SKS. Pierre gives a gift of 9,883,000 CS shares of Ebay @ $0/share. Leaving him with 132,448,409.