Do it Yourself (DIY) Links to Solar Cooking Projects.

Teachings. The Seven Greatest Human Needs. Beyond your basic physiological and safety needs, what are the most important needs in your life? 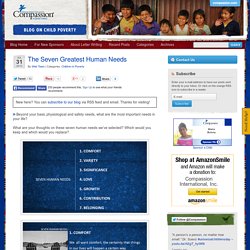 The Da Vinci Code: Secret Hidden Truth? The Devil is a liar and the father of lies, and the heart of man is deceitful above all things, and desperately corrupt. 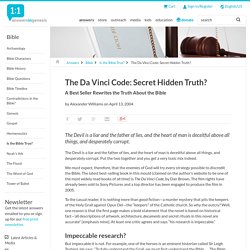 The Devil is a liar and the father of lies, and the heart of man is deceitful above all things, and desperately corrupt. Put the two together and you get a very toxic mix indeed. We must expect, therefore, that the enemies of God will try every strategy possible to discredit the Bible. The latest best-selling book in this mould (claimed on the author’s website to be one of the most widely read books of all time) is The Da Vinci Code, by Dan Brown. The film rights have already been sold to Sony Pictures and a top director has been engaged to produce the film in 2005. To the casual reader, it is nothing more than good fiction—a murder mystery that pits the keepers of the Holy Grail against Opus Dei—the “keepers” of the Catholic church. Impeccable research? But impeccable it is not. The Bible testifies of itself that it is indeed “God-breathed” (2 Timothy 3:16).

Departed this life! Perplexed and lonely, a soul stands in the chamber of death! 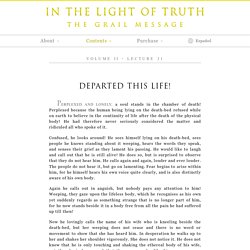 Perplexed because the human being lying on the death-bed refused while on earth to believe in the continuity of life after the death of the physical body! He had therefore never seriously considered the matter and ridiculed all who spoke of it. Confused, he looks around! He sees himself lying on his death-bed, sees people he knows standing about it weeping, hears the words they speak, and senses their grief as they lament his passing. He would like to laugh and call out that he is still alive! Again he calls out in anguish, but nobody pays any attention to him! Now he lovingly calls the name of his wife who is kneeling beside the death-bed, but her weeping does not cease and there is no word or movement to show that she has heard him.

An unspeakable feeling of dread makes him shudder! The sound of a voice he used to know gradually awakens him again. His friend! They left and others came. 8 Easy Projects for Instant Home Energy Savings - Renewable Energy. Reducing your home energy use is the best of win-win deals — not only does it reduce your carbon footprint, it also saves you big bucks on your energy bills. 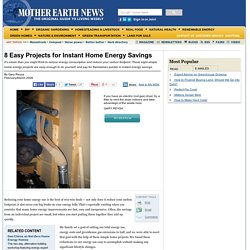 That’s especially exciting when you consider that many home energy improvements are fast, easy and inexpensive. Often, the savings from an individual project are small, but when you start putting them together they add up quickly. My family set a goal of cutting our total energy use, energy costs and greenhouse gas emissions in half, and we were able to meet that goal with the help of these simple home projects. We found these reductions in our energy use easy to accomplish without making any significant lifestyle changes. Here are the details: We cut our total energy use from 93,000 kilowatt hours (kWh) per year to 38,000 kWh per year. Altogether, we took on 22 different projects, including two solar heating efforts that have already appeared in MOTHER EARTH NEWS.

Prioritizing the Projects Electricity and Greenhouse Gas. 10 Simple Steps To Financial Security Before 30. Being financially secure enough to enjoy your life in retirement is the last thing on the minds of those under 30. 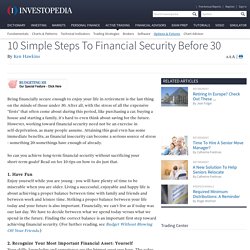 After all, with the stress of all the expensive "firsts" that often come about during this period, like purchasing a car, buying a house and starting a family, it's hard to even think about saving for the future. However, working toward financial security need not be an exercise in self-deprivation, as many people assume. Attaining this goal even has some immediate benefits, as financial insecurity can become a serious source of stress - something 20-somethings have enough of already.

Mike was in his room writing a paper for his U.S. History class. On his desk next to his computer sat crunched Red Bulls, empty Gatorade bottles, some extra pocket change and scattered pieces of paper. In the pocket of his sweat pants rested a blaring iPod with a chord that dangled near the floor, almost touching against his Adidas sandals. On his computer sat even more stray objects than his surrounding environment. Mike made a shift about every thirty seconds between all of the above.

Do you know a person like this? The Science Behind Concentration.