Arduino Ethernet Shield–LED ON/OFF from webpage. This post is a practical demo on controlling an LED from a browser. 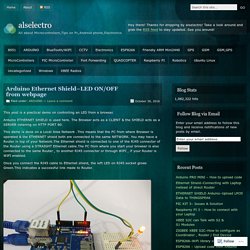 Arduino ETHERNET SHIELD is used here. The Browser acts as a CLIENT & the SHIELD acts as a SERVER listening on HTTP PORT 80. This demo is done on a Local Area Network .This means that the PC from where Browser is operated & the ETHERNET shield both are connected to the same NETWORK. You may have a Router in top of your Network.The Ethernet shield is connected to one of the RJ45 connector of the Router using a STRAIGHT Ethernet cable.The PC from where you start your browser is also connected to the same Router , to another RJ45 connecter or through WIFI , if your Router is WIFI enabled. 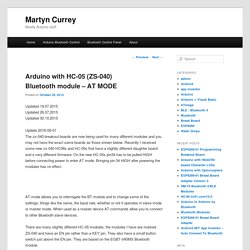 Recently I received some new zs-040 HC06s and HC-05s that have a slightly different daughter board and a very different firmware. On the new HC-05s pin34 has to be pulled HIGH before connecting power to enter AT mode. Bringing pin 34 HIGH after powering the modules has no effect. AT mode allows you to interrogate the BT module and to change some of the settings; things like the name, the baud rate, whether or not it operates in slave mode or master mode. 123D Circuits. Tutoriel 2 : Comment programmer une carte Arduino ? (Partie 1) - 10 février 2013. Shy Roboticiennes, Shy Roboticiens, Cette semaine débute la série de tutoriels de la carte Arduino. 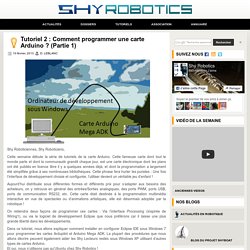 I – Installer l’interface de développement Eclipse IDE. Arduino code. Minimal Arduino with ATmega8. Or: A good use for old Arduino boards Like me, you may have a few old Arduino boards or ATmega8 chips (in the boards) laying around from when you were first playing with Arduino. 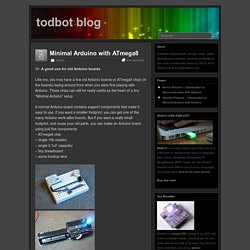 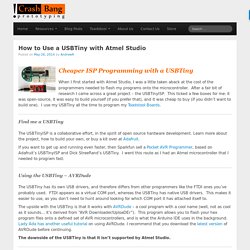 After a fair bit of research I came across a great project – the USBTinyISP. This ticked a few boxes for me: it was open-source, it was easy to build yourself (if you prefer that), and it was cheap to buy (if you didn’t want to build one). I use my USBTiny all the time to program my Toadstool Boards. Find me a USBTiny The USBTinyISP is a collaborative effort, in the spirit of open source hardware development. If you want to get up and running even faster, then Sparkfun sell a Pocket AVR Programmer, based on Adafruit’s USBTinyISP and Dick Streefland’s USBTiny. Using the USBTiny – AVRDude The USBTiny has its own USB drivers, and therefore differs from other programmers like the FTDI ones you’ve probably used. The downside of the USBTiny is that it isn’t supported by Atmel Studio. Get the USBTiny Working with Atmel STudio. Burning the Bootloader to an Arduino Uno using Atmel Studio and the AVRISP mkII. Created on: 13 October 2012 Updated on: 27 February 2016 If your Arduino Uno microcontroller has been damaged or got "bricked up" and you need to get it working again quickly, you will need to replace the microcontroller chip (ATMEGA328P) and then load the bootloader program to the microcontroller. 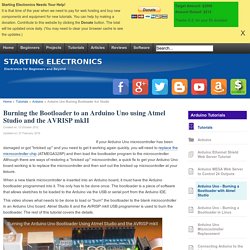 Integrate ArduinoISP and Atmel Studio. Since you have used the Arduino IDE to load the ArduinoISP sketch to your Arduino board, this means that you already have AVRDUDE installed in your computer. 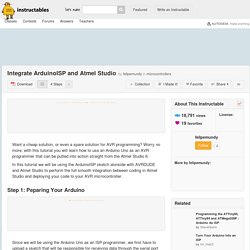 AVRDUDE is a command line application that intermediates the firmware loading process on your computer side. Long story short, AVRDUDE reads the .hex file produced by the compilation and translation process and queues it in order to output it correctly through the serial port. From there the USB-serial converter on your Uno board (the black square next to the USB port) reads it from the USB line, sends it to the ATMEGA on the Arduino Uno board and finally outputs it through SPI to the target microcontroller. One of the coolest features of Atmel Studio is the support to external tools, like the AVRDUDE itself.

Basically, Atmel Studio leaves this open enough to customization, that with the press of a button, you can perform a full command line program call and deploy your firmware to the target microcontroller. Enough said, Atmega Programming With USBtinyISP and Arduino - All. This is to show how you can program an Amtel Atmega chip using a USB AVR programmer. 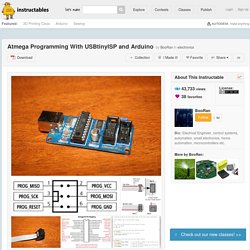 I have chosen the USBtinyISP v3.0 to program. I picked mine up on ebay for i think $10. I will also be using the Arduino software, because it is free and I like the language it uses. Pocket AVR Programmer Hookup Guide. Favorited Favorite 4. 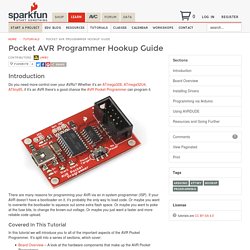 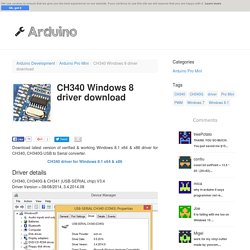 Both 10-pin and 6-pin targets supported (cable included) which makes the progrmmer suitable for most AVR boards. USBtinyISP. This is documentation for a simple open-source USB AVR programmer and SPI interface. It is low cost, easy to make, works great with avrdude, is AVRStudio-compatible and tested under Windows, Linux and MacOS X. Perfect for students and beginners, or as a backup programmer. The project is based off of the USBtiny code & design. The main improvements are: adjusting the code to allow it to act as a SpokePOV interface, adding lowlevel bitbang commands, and addition of a "USB good" LED. Other changes are new VID/PID (to make it official), removing some of the commands, and moving around the pins a bit. You can build this design using the schematic and firmware, or buy a kit from the Adafruit webshop. All the firmware code is distributed under the GPL, the hardware design layout files are CC 2.5 Attrib. LightBlue Beans - Magic Beans and no beans[talk]? - CodeProject.

Bean Demo - VS2013 C# - 47.6KB - 47.6 KB Warning: This article and associated code could be classed as experimental/research. As things unfold, you will see why..... IoT Competition Stage 2 - Preface When you begin to get more heavily involved with devices or are working with devices which are new to market, there isn't always someone around to hold your hand. There can also be no Step 1 Step 2 Step 3...type articles and tutorials or if there are, they are still miles off what you are trying to work with, you often have to get the gloves off and get your hands dirty.

How to Flash Arduino Bootloader without a Programmer - Welldone Blog - FEDEVEL. If you have an Arduino Uno R3, then you don’t need any programmer to flash a bootloader into ATMEGA328P. How does it work: There are two microcontrollers on the Arduino board: ATMEGA328P (328P) and ATMEGA16U2 (16U2). You can update firmware of 16U2 to become AVRISP MKII programmer and then use Atmel Studio to flash 328P.

I started with kosakalab website, but I had some issues and the steps didn’t work very well for me (especially the part of flashing bootloader through Arduino Software). There were more problems and therefore I decided to put the whole process on my blog, so other people can save their time. Install Atmel FLIP Software You will need Atmel FLIP software to update the firmware inside 16U2. 1. 4. Flash AVRISP MKII firmware into ATmega16U2.

PIC 3x3x3 LED Cube. The PIC drives the cube without external IC's and with very few extra components. To make your own LED cube you'll need: -A PIC16F628A Microchip microcontroller ($2 ebay) USBasp - USB programmer for Atmel AVR controllers - fischl.de. Official USBasp product by MSX. Programming - Arduino Nano uploading gives error: avrdude: stk500_recv(): programmer is not responding - Arduino Stack Exchange. How to Burn a Bootloader to Clone Arduino Nano 3.0 - 3. Avrdude: stk500_recv(): programmer is not responding. ArduinoISP/ArduinoISP.ino at master · adafruit/ArduinoISP. Pocket AVR Programmer - PGM-09825. Works very well for the ATmega328P and I’m sure it works well with others too. Note that just as the description says, it does include an AVR programming cable.

I ordered one separately because apparently I just can’t read well. Also note that it worked fine for me on Linux. I installed avrdude and used the following line: Burning a bootloader to an Arduino Nano using another Arduino. Recently I have bought a cheap clone of Arduino Nano from the Chinese site Deal Extreme. Unfortunately, that product (SKU 81877) comes without a bootloader.