200+ Labels Withdraw Their Music From Spotify: Are Its Fortunes Unravelling? Amazon looks to improve Kindle @author beta after tepid response. It’s one of those cool concepts that points to the potential of the digital age. 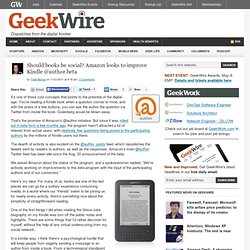 You’re reading a Kindle book when a question comes to mind, and with the press of a few buttons, you can ask the author the question via Twitter from inside the book. Gutenberg would be blown away. That’s the promise of Amazon’s @author initiative. But since it was rolled out in beta form a few months ago, the program hasn’t attracted a lot of interest from actual users, with relatively few questions being posed to the participating authors by the millions of Kindle users out there. The dearth of activity is also evident on the @author_posts feed, which republishes the tweets sent by readers to authors, as well as the responses.

We asked Amazon about the status of the program, and a spokeswoman replied, “We’re actively working on improvements to this beta program with the input of the participating authors and of our customers.” Google Enters Microsoft Office’s Turf with Mixed Results. He has installed Apps for Businesses, which provides word processing, spreadsheets, e-mail and calendar software, for 400 people and said he planned to “convert” 900 more. 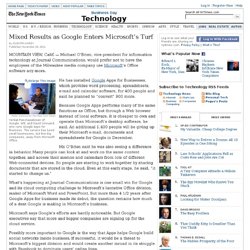 Because Google Apps performs many of the same functions as Office, but through a Web browser instead of local software, it is cheaper to own and operate than Microsoft’s desktop software, he said. An additional 1,400 people will be giving up their Microsoft e-mail, documents and spreadsheets for Google in December. Mr. O’Brien said he was also seeing a difference in behavior. Many people can look at and work on the same content together, and access their memos and calendars from lots of different Web-connected devices. What’s happening at Journal Communications is one small win for Google and its cloud computing challenge to Microsoft’s lucrative Office division, maker of Microsoft Word and PowerPoint. How Facebook is ruining sharing. I'm afraid to click any links on Facebook these days. 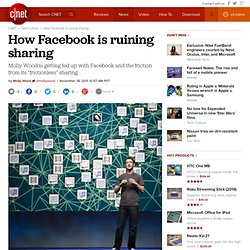 No, it's got nothing to do with the spam attack and the flood of nasty images making their way into news feeds all last week. Instead, it's because the slow spread of Facebook's Open Graph scheme is totally ruining sharing. I know you've seen this at the top of your news feed: a list of stories your friends have been reading. Why Facebook's Seamless Sharing is Wrong.

Facebook recently instituted a new program that makes it easy for 3rd party websites and services to automatically post links about your activity elsewhere back into Facebook and the newsfeeds of your friends. 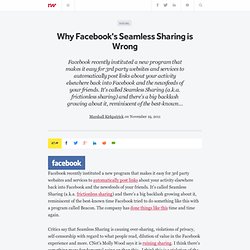 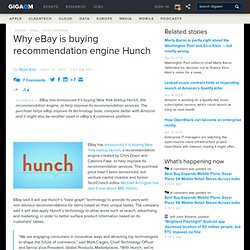 The purchase price hasn’t been announced, but venture capital investor and former TechCrunch editor Michael Arrington has said it was about $80 million. EBay said it will use Hunch’s “taste graph” technology to provide its users with non-obvious recommendations for items based on their unique tastes. The company said it will also apply Hunch’s technology to other areas such as search, advertising and marketing, in order to better surface product information based on its customers’ tastes. “We are engaging consumers in innovative ways and attracting top technologists to shape the future of commerce,” said Mark Carges, Chief Technology Officer and Senior Vice President, Global Products, Marketplaces. Hunch will remain in New York with co-founders Chris Dixon, Tom Pinckney and Matt Gattis staying on board with the company. Inside Facebook’s Amazing Oregon Data Center. Back in April, I attended a press event at Facebook’s Silicon Valley headquarters, at which Mark Zuckerberg rhapsodized about the company’s new data center in Prineville, Oregon–the first one it built for itself. 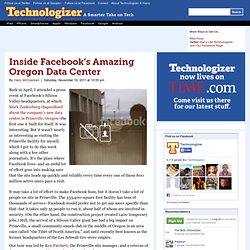 It was interesting. Can the iPhone 4S replace a "real" digital camera? Ars investigates. When Apple announced the iPhone 4S, the company certainly talked up the improvements made to the smartphone's integrated camera hardware. 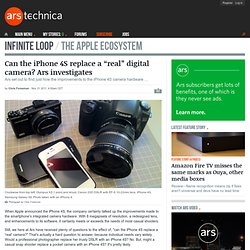 With 8 megapixels of resolution, a redesigned lens, and enhancements to its software, it certainly meets or exceeds the needs of most casual shooters. Still, we here at Ars have received plenty of questions to the effect of, "can the iPhone 4S replace a 'real' camera? " That's actually a hard question to answer, because individual needs vary widely. Would a professional photographer replace her trusty DSLR with an iPhone 4S? No. Making a decision to ditch your camera for a smartphone is always going to be a matter of personal preference and a trade-off between convenience versus quality. There are two things we did not do, however. The other thing we didn't do was compare the video capabilities of the iPhone 4S.

What we were interested in was evaluating the iPhone 4S as a still camera that could possibly replace a 'real' digital camera. Quietly, Google Puts History Online.