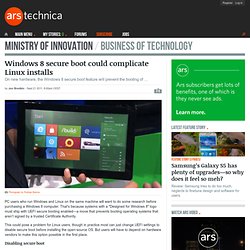 That's because systems with a "Designed for Windows 8" logo must ship with UEFI secure booting enabled—a move that prevents booting operating systems that aren’t signed by a trusted Certificate Authority. This could pose a problem for Linux users, though in practice most can just change UEFI settings to disable secure boot before installing the open-source OS. But users will have to depend on hardware vendors to make this option possible in the first place. Disabling secure boot “Microsoft requires that machines conforming to the Windows 8 logo program and running a client version of Windows 8 ship with secure boot enabled,” Red Hat developer Matthew Garrett writes on his blog in reference to a recent presentation by Microsoft program manager Arie van der Hoeven.

Excerpt: Google to cite Bing’s growth in antitrust defense - GeekWire (Build 20110920042010) Eric Schmidt It will be a very interesting day for the technology industry in Washington, D.C., as the U.S. 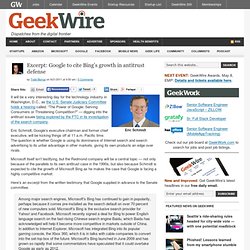 Senate Judiciary Committee holds a hearing called, “The Power of Google: Serving Consumers or Threatening Competition?” — digging into the antitrust issues being explored by the FTC in its investigation of the search company. There's No Such Thing As 'Natural' Search Results; Search Results Are Inherently Biased. Schmidt ducks antitrust questions lobbed from Congress. High performance access to file storage When Google's Eric Schmidt testified before Congress on Wednesday, the first question came from Senator Herb Kohl, chairman of the Judiciary Subcommittee on Antitrust, Competition Policy, and Consumer Rights. 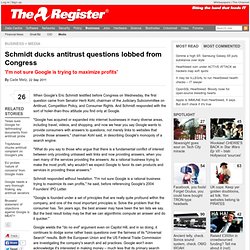 And Schmidt responded with the sort of holier-than-thou attitude you find only at Google. "Google has acquired or expanded into internet businesses in many diverse areas, including travel, videos, and shopping, and now we hear you say Google wants to provide consumers with answers to questions, not merely links to websites that provide those answers," chairman Kohl said, in describing Google's monopoly of a search engine. "What do you say to those who argue that there is a fundamental conflict of interest between only providing unbiased web links and now providing answers, when you own many of the services providing the answers.

Google's Schmidt, Senators bicker over whether links were 'cooked' Google executive chairman Eric Schmidt and a panel of senators agreed to disagree over whether the search giant favors its own properties over competitors. 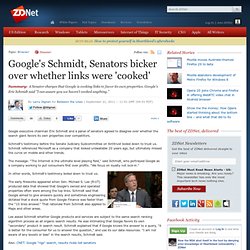 Schmidt's testimony before the Senate Judiciary Subcommittee on Antitrust boiled down to trust us. Schmidt referenced Microsoft as a company that looked unbeatable 20 years ago, but ultimately missed the curve on mobile and other trends. Why the Best Days of Open Hardware are Yet to Come « bunnie's blog (Build 20110920042010) Recently, I gave a talk at the 2011 Open Hardware Summit. 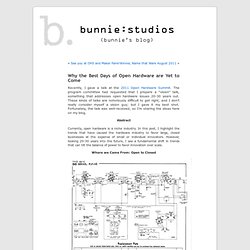 The program committee had requested that I prepare a “vision” talk, something that addresses open hardware issues 20-30 years out. These kinds of talks are notoriously difficult to get right, and I don’t really consider myself a vision guy; but I gave it my best shot. TV Everywhere is coming to Google TV — Online Video News (Build 20110920042010) Sean Parker: Agent Of Disruption - Forbes (Build 20110920042010)