Why Netflix is splitting itself in two. The amazing shipping container: How it changed the world. Keith Tantlinger has just died. 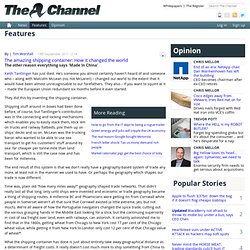 He's someone you almost certainly haven't heard of and someone who – along with Malcolm McLean (no, not McLaren) – changed our world to the extent that it would have been almost unrecognisable to our forefathers. They also – if you want to squint at it – made the European Union redundant six months before it even started. They did this by inventing the shipping container. Shipping stuff around in boxes had been done before, of course, but Tantlinger's contribution was in the connecting and locking mechanisms which enables you to easily stack them, stick 'em on trucks and railway flatbeds, pile them up on ships' decks and so on. Source: Facebook To Launch Read, Listened, Watched, And Want Buttons. The cat is out of the bag that Facebook is going to launch something big at its developer conference f8 this week. 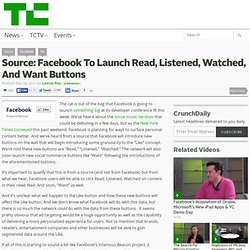 We’ve heard about the social music services that could be debuting in a few days, but as the New York Times conveyed this past weekend, Facebook is planning for ways to surface personal content better. And we’ve heard from a source that Facebook will introduce new buttons on the wall that will begin introducing some granularity to the “Like” concept. We’re told these new buttons are “Read,” “Listened,” “Watched.” Dell shrugs off harbingers of PC doom. Michael Dell says he has little interest in buying Hewlett-Packard’s PC business, but the Dell chief executive says his computer company is poised to gain market share as its larger rival undergoes a comprehensive restructuring. 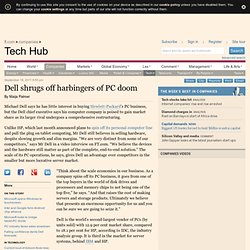 Unlike HP, which last month announced plans to spin off its personal computer line and pull the plug on tablet computing, Mr Dell still believes in selling hardware, despite slowing growth and slim margins. “We are very distinct from some of our competitors,” says Mr Dell in a video interview on FT.com. “We believe the devices and the hardware still matter as part of the complete, end-to-end solution.” The scale of its PC operations, he says, gives Dell an advantage over competitors in the smaller but more lucrative server market. Google-Oracle Meeting Ordered by Court May End Legal Dispute Over Android. Google Inc. and Oracle Corp. 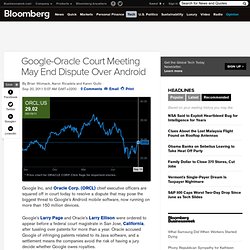 (ORCL) chief executive officers are squared off in court today to resolve a dispute that may pose the biggest threat to Google’s Android mobile software, now running on more than 150 million devices. Google’s Larry Page and Oracle’s Larry Ellison were ordered to appear before a federal court magistrate in San Jose, California, after tussling over patents for more than a year.

Oracle accused Google of infringing patents related to its Java software, and a settlement means the companies avoid the risk of having a jury decide whether Google owes royalties. “It’s like Gorbachev and Reagan,” said Scott Daniels, a lawyer with Westerman Hattori Daniels & Adrian LLP in Washington. Google Wallet review: photos, videos, and availability. Why 80 Percent of Web Projects Are Total Bullshit: A Freelancer’s Rant. By Edward Case 9/19/11 4:11pm Share this: This is a guest post from the pseudonymous Edward Case, a Brooklyn-based freelance developer, which was adapted from an email to Betabeat. 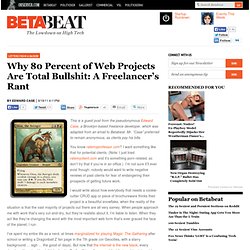 AT&T Said to Seek Asset Sales to Save Bid for T-Mobile. AT&T Inc. 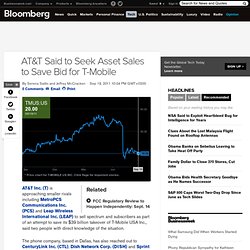 (T) is approaching smaller rivals including MetroPCS Communications Inc. (PCS) and Leap Wireless International Inc. Gamers Unlock Protein Mystery That Baffled AIDS Researchers For Years. Using a game called Foldit, players were able to unlock the structure of a key protein in the progression of HIV. 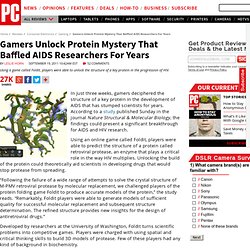 In just three weeks, gamers deciphered the structure of a key protein in the development of AIDS that has stumped scientists for years. According to a study published Sunday in the journal Nature Structural & Molecular Biology, the findings could present a significant breakthrough for AIDS and HIV research. Using an online game called Foldit, players were able to predict the structure of a protein called retroviral protease, an enzyme that plays a critical role in the way HIV multiplies. Unlocking the build of the protein could theoretically aid scientists in developing drugs that would stop protease from spreading. Metro Apps to Be Sold Only From Microsoft's App Store. News September 19, 2011 06:01 AM ET Computerworld - Metro apps for Windows 8 will be available only through Microsoft's own store, the company said at its BUILD Windows conference last week.

But although Microsoft went to pains to say that it would not discuss the business end of the app store -- including what percentage the company will return to developers -- a primer of the download market published by Microsoft said that it, like Apple, will take a 30% cut of all sales. Last week, Microsoft confirmed that the Windows Store -- the official name for what executives have referred to as "our Windows app store" -- will be the sole distribution channel for Metro apps, those that run in the Metro interface in Windows 8 on Intel-powered devices, and the only ones that will be permitted on ARM-based Windows 8 tablets. "We will be the only store for distribution of Metro-style apps," said Dworkin. Blog.netflix.com/2011/09/explanation-and-some-reflections.html. 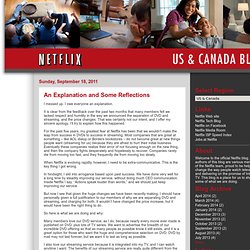 I owe everyone an explanation. It is clear from the feedback over the past two months that many members felt we lacked respect and humility in the way we announced the separation of DVD and streaming, and the price changes. That was certainly not our intent, and I offer my sincere apology. I’ll try to explain how this happened. For the past five years, my greatest fear at Netflix has been that we wouldn't make the leap from success in DVDs to success in streaming. Why Reed Hastings Should be Applauded for Netflix Split. By now you probably know that Netflix is splitting its business into two parts: its digital streaming business (retains the name Netflix) and its DVD mailing business, which was its original business (to be called Qwikster). 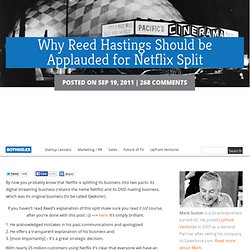 If you haven’t read Reed’s explanation of this split make sure you read it (of course, after you’re done with this post ;-)) —> here. It’s simply brilliant. 1. He acknowledged mistakes in his past communications and apologized 2.