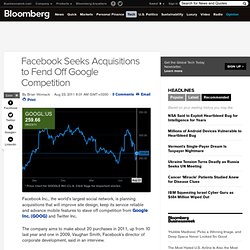 (GOOG) and Twitter Inc. The company aims to make about 20 purchases in 2011, up from 10 last year and one in 2009, Vaughan Smith, Facebook’s director of corporate development, said in an interview. Google fiber network beta goes live at Stanford. Network World - Some lucky Palo Alto, Calif., residents are getting a glimpse of what Google's new fiber network will soon deliver to Kansas City, Kan. 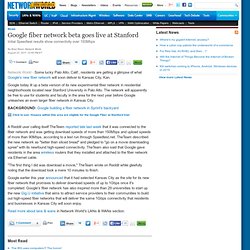 Google today lit up a beta version of its new experimental fiber network in residential neighborhoods located near Stanford University in Palo Alto. The network will apparently be free to use for students and faculty in the area for the next year before Google unleashes an even larger fiber network in Kansas City. Exclusive: ComScore takes users' credit card numbers: lawsuit. Cheap TouchPads show what's wrong with tablets.

When the news broke about cut-price UK TouchPads yesterday afternoon, I came up with a cunning plan for people who hadn't already clambered aboard the tablet bandwagon: buy an HP TouchPad just now, and then get an iPad 3 or Android 4 tablet next year. I wasn't being sarky. At £400ish, TouchPads are a tough sell. At £90, they're a steal. Six improvements we'd like to see made to Google+ (Build 20110814042011) Google+ has done right by the staff of Ars in many ways. 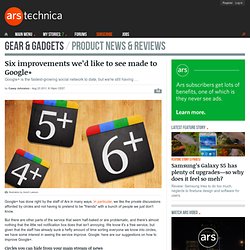 In particular, we like the private discussions afforded by circles and not having to pretend to be "friends" with a bunch of people we just don't know. But there are other parts of the service that seem half-baked or are problematic, and there's almost nothing that the little red notification box does that isn't annoying. We know it's a free service, but given that the staff has already sunk a hefty amount of time sorting everyone we know into circles, we have some interest in seeing the service improve.

Google: here are our suggestions on how to improve Google+. Circles you can hide from your main stream of news. Making It Easier to Share With Who You Want (Build 20110814042011) Facebook Makes Sharing More Granular - Liz Gannes - Social - AllThingsD (Build 20110814042011) Facebook will attempt to address some perceived weaknesses of its interface by making content sharing more precise and visual in a redesign that launches this week. 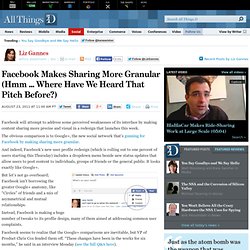 The obvious comparison is to Google+, the new social network that’s gunning for Facebook by making sharing more granular. And indeed, Facebook’s new user profile redesign (which is rolling out to one percent of users starting this Thursday) includes a dropdown menu beside new status updates that allow users to post content to individuals, groups of friends or the general public. Facebook’s new privacy and sharing defenses (they are quite nice) — Scobleizer (Build 20110814042011) Mark Zuckerberg is the smartest social thinker I’ve met on my journey through life. 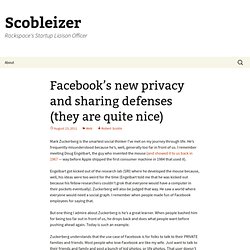 He’s frequently misunderstood because he’s, well, generally too far in front of us. I remember meeting Doug Engelbart, the guy who invented the mouse (and showed it to us back in 1967 — way before Apple shipped the first consumer machine in 1984 that used it). Engelbart got kicked out of the research lab (SRI) where he developed the mouse because, well, his ideas were too weird for the time (Engelbart told me that he was kicked out because his fellow researchers couldn’t grok that everyone would have a computer in their pockets eventually). Zuckerberg will also be judged that way. Facebook Aims to Simplify Privacy Settings - NYTimes.com (Build 20110814042011) Facebook is simplifying privacy controls for posts. 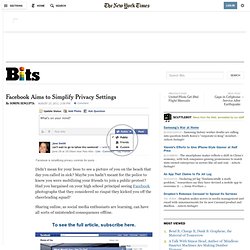 Didn’t mean for your boss to see a picture of you on the beach that day you called in sick? Maybe you hadn’t meant for the police to know you were mobilizing your friends to join a public protest? With iPads, paper no longer flies for United — Apple News, Tips and Reviews (Build 20110814042011) Exclusive: Apple suppliers building cheaper, 8GB iPhone. China airs documentary proving military university is hacking U.S. targets – Tech Products & Geek News. For a long time now there has been suspicion that China is a hotbed of hacking activity either endorsed or ignored by the government and targeting foreign individuals, companies, and even governments. 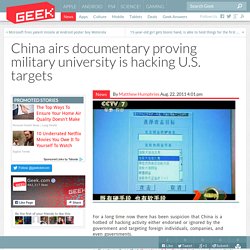 The Chinese government has always denied this, but high-profile pull outs such as that threatened by Google last year, demonstrate there is definitely something going on, and now we have proof hacking tools are being developed and attacks carried out at official institutions in the country. In July, a documentary full of military propaganda was aired on TV across China. The footage happened to contain proof that a Chinese military university is using hacking software it has developed along with compromised U.S.

IP addresses to target dissident groups. The damning footage only lasts for 6 seconds, but that’s all we need to see the evidence.