Biggest-ever series of cyber attacks uncovered, U.N. hit. Enter the Cyber-dragon. Security took her laptop to analyze it, and “that was the string they started pulling” that unraveled the Aurora attack. 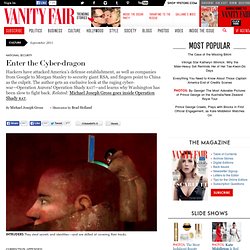 Much more significant, however—and previously unreported—is that the intruders used Google’s internal search engine to look for words related to the company’s signing certificates: virtual credentials that verify the identity of the source of any software before it can be downloaded to a computer. This part of the attack was foiled because Google keeps its signing certificates offline, in an “air-gapped” network—a network that is not connected to the Internet. The search for signing certificates is a disturbing new piece of information about Operation Aurora’s intentions. It also suggests a link to the SecurID theft. Exclusive: Operation Shady RAT—Unprecedented Cyber-espionage Campaign and Intellectual-Property Bonanza. When the history of 2011 is written, it may well be remembered as the Year of the Hack. 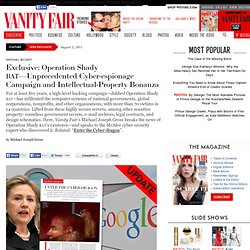 Long before the saga of News of the World phone hacking began, stories of computer breaches were breaking almost every week. In recent months, Sony, Fox, the British National Health Service, and the Web sites of PBS, the U.S. Senate, and the C.I.A., among others, have all fallen victim to highly publicized cyber-attacks. Many of the breaches have been attributed to the groups Anonymous and LulzSec. Dmitri Alperovitch, vice president of threat research at the cyber-security firm McAfee, says that for him, “it’s been really hard to watch the news of this Anonymous and LulzSec stuff, because most of what they do, defacing Web sites and running denial-of-service attacks, is not serious. Why Did Facebook Buy an e-Book Publisher? Is Facebook about to get into the e-book business? 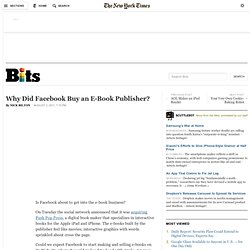 On Tuesday the social network announced that it was acquiring Push Pop Press, a digital book maker that specializes in interactive books for the Apple iPad and iPhone. The e-books built by the publisher feel like movies; interactive graphics with words sprinkled about cross the page. Could we expect Facebook to start making and selling e-books on its Web site where it would go head-to-head with Apple, Amazon and Google? Facebook denies such a claim.

Ron Wyden Puts Hold On FISA Amendments Act; Wants Answers To How Many Americans Have Been Spied On. Last week, we noted that as everyone was focused on the debt ceiling, some in the Senate Intelligence Committee saw it as an opportunity to rush through an extension for the FISA Amendment Act, which was originally passed to "legalize" the government's warrantless wiretapping program (already ongoing) with retroactive immunity. 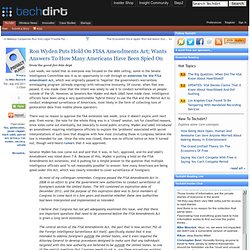 Of course, when that was passed, it was made clear that the intent was solely to use it to conduct surveillance on people outside of the US. However, as Senators Ron Wyden and Mark Udall have made clear, intelligence officials have been using a very questionable "hybrid theory" to use the FAA and the Patriot Act to conduct widespread surveillance of Americans, most likely in the form of collecting tons of geolocation data from mobile phone operators. There was no reason to approve the FAA extension last week, since it doesn't expire until next year.

Apple’s Tech Support Is Not As Good As It Used To Be, Study Claims. According to a study conducted by Minnesota-based research firm Vocal Laboratories (aka Vocalabs), Apple’s lead in tech support quality is slipping, while consumer satisfaction scores for HP are improving. 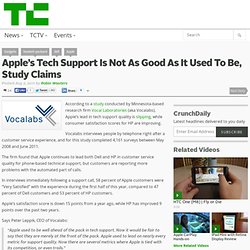 Vocalabs interviews people by telephone right after a customer service experience, and for this study completed 4,161 surveys between May 2008 and June 2011. The firm found that Apple continues to lead both Dell and HP in customer service quality for phone-based technical support, but customers are reporting more problems with the automated part of calls. In interviews immediately following a support call, 58 percent of Apple customers were “Very Satisfied” with the experience during the first half of this year, compared to 47 percent of Dell customers and 53 percent of HP customers.

54,805 reasons not to be Amazon’s free app of the day — Mobile Technology News. Amazon App Store: Rotten To The Core. About 3 months ago, we set off on a little experiment into the world of the Amazon App Store. 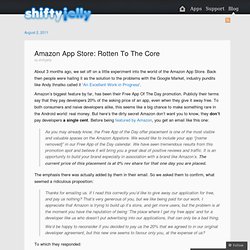 Back then people were hailing it as the solution to the problems with the Google Market, industry pundits like Andy Ihnatko called it ‘An Excellent Work in Progress‘. Amazon’s biggest feature by far, has been their Free App Of The Day promotion. Publicly their terms say that they pay developers 20% of the asking price of an app, even when they give it away free. Amazon's Growing Appstore Problem: Android Developer Relations. When the Amazon Appstore was announced, there was great hope for the new platform. 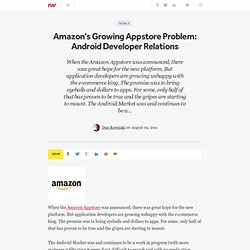 But application developers are growing unhappy with the e-commerce king. The promise was to bring eyeballs and dollars to apps. For some, only half of that has proven to be true and the gripes are starting to mount. The Android Market was and continues to be a work in progress (with more malware infiltrating it every day): difficult to search and with no application filtering process, a la Apple. AOL Makes an iPad Reader. AOL’s personalized news reader for the iPad, Editions, is intended to give people a daily news briefing. 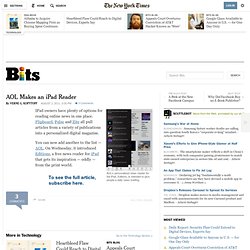 IPad owners have plenty of options for reading online news in one place. Flipboard, Pulse and Zite all pull articles from a variety of publications into a personalized digital magazine. Broadband subscribers mostly get what they pay for. Good news for U.S. broadband customers: On average major Internet service providers are delivering up to 80 percent of advertised broadband speeds, according to a study by the Federal Communications Commission. 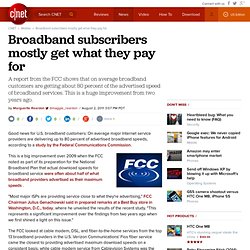 This is a big improvement over 2009 when the FCC noted as part of its preparation for the National Broadband Plan that actual download speeds for broadband service were often about half of what broadband providers advertised as their maximum speeds . "Most major ISPs are providing service close to what they're advertising," FCC Chairman Julius Genachowski said in prepared remarks at a Best Buy store in Washington, D.C., today, where he unveiled the results of the recent study.

"This represents a significant improvement over the findings from two years ago when we first shined a light on this issue. " Rural broadband for all means satellite for some under big telcos' plan. Good news, Federal Communications Commission watchers. 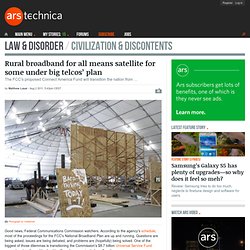 According to the agency's schedule, most of the proceedings for the FCC's National Broadband Plan are up and running. Questions are being asked, issues are being debated, and problems are (hopefully) being solved. One of the biggest of those dilemmas is transitioning the Commission's $8.7 billion Universal Service Fund support system from old-school landline phone service to broadband. The Latest Groupon Killer: Amazon - Deal Journal. Getty Images The clones are attacking in droves. While Groupon has become perhaps the fastest-growing company in the history of humanity, Groupon fans have been forced to fend off nagging questions about when and whether competitors would start pecking away at its business model. Groupon's Worst Nightmare: Amazon Entering Daily Deals Space. Daily deals giant Groupon has to be wondering what it did to anger the largest e-commerce player in the market.

According to The Wall Street Journal, Amazon is not only launching a daily deals program, called Amazon Local, but the initial rollout is coming to Groupon's backyard of Chicago. Not only is Amazon trying to stick it to Groupon, the e-commerce giant has employed the services of its partner and Groupon's largest competitor, LivingSocial, to be the sales force behind merchant partnerships with the service. The WSJ notes that Amazon plans on hiring its own sales force but it is a clever move by the company to outsource the sales team initially so as to ramp up the service quickly. The Most Expensive One-byte Mistake. Related Content Browse this Topic: Queue on Reddit.