A Firsthand Examination of the Google+ Profile Reporting Process. The Case for Software Patents. It's become popular lately to call for the elimination of software patents. 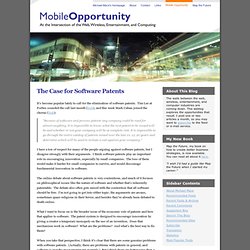 Tim Lee at Forbes sounded the call last month (link), and this week Mark Cuban joined the chorus (link): "Because of software and process patents any company could be sued for almost anything. Why software patents are not fixable. I’m not a patent lawyer. 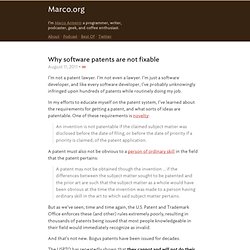 I’m not even a lawyer. I’m just a software developer, and like every software developer, I’ve probably unknowingly infringed upon hundreds of patents while routinely doing my job. Digitally Fatigued, Networkers Try New Sites, but Strategize to Avoid Burnout. Zynga Discloses $1 Billion in Available Credit for Making Acquisitions - Tricia Duryee - Commerce. Zynga has $1 billion at its disposal that could potentially be used for making large acquisitions, according to an updated version of the social game company’s IPO filing, released today. 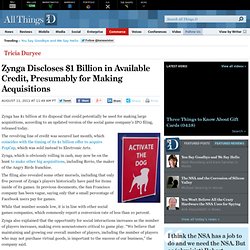 The revolving line of credit was secured last month, which coincides with the timing of its $1 billion offer to acquire PopCap, which was sold instead to Electronic Arts. Zynga, which is obviously rolling in cash, may now be on the hunt to make other big acquisitions, including Rovio, the maker of the Angry Birds franchise. The filing also revealed some other morsels, including that only five percent of Zynga’s players historically have paid for items inside of its games. In previous documents, the San Francisco company has been vague, saying only that a small percentage of Facebook users pay for games. While that number sounds low, it is in line with other social games companies, which commonly report a conversion rate of less than 10 percent. Blaming the tools: Britain proposes a social-media ban. It seems totalitarian states like Egypt and Libya aren’t the only ones struggling with the impact of social media and the desire to muzzle services like Twitter and Facebook. 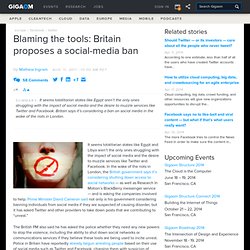 In the wake of the riots in London, the British government says it’s considering shutting down access to social networks — as well as Research In Motion’s BlackBerry messenger service — and is asking the companies involved to help. Prime Minister David Cameron said not only is his government considering banning individuals from social media if they are suspected of causing disorder, but it has asked Twitter and other providers to take down posts that are contributing to “unrest.” The British PM also said he has asked the police whether they need any new powers to stop the violence, including the ability to shut down social networks or communications services if they believe these tools are being used to incite unrest.

Google+ gets games, but game-haters don't have to see them. Games are coming to Google+, bringing the new social network more in line than ever with Facebook. 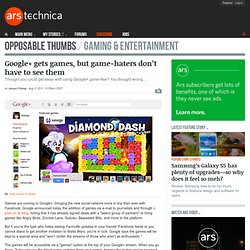 Google announced today the addition of games via e-mail to journalists and through a post on its blog, noting that it has already signed deals with a "select group of partners" to bring games like Angry Birds, Zombie Lane, Sudoku, Bejeweled Blitz, and more to the platform. But if you're the type who hates seeing Farmville updates in your friends' Facebook feeds or you cannot stand to get another invitation to Mafia Wars, you're in luck: Google says the games will be kept to a special area and "won't clutter the streams of those who aren't as enthusiastic. " How Google+ Games Undercuts Both Facebook and Apple - Tricia Duryee - Commerce. Google’s move into videogames today should scare both Facebook and Apple, the two leading next-generation game platforms. 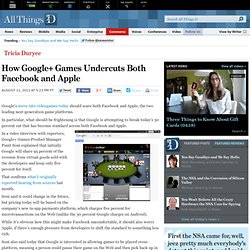 In particular, what should be frightening is that Google is attempting to break today’s 30 percent cut that has become standard across both Facebook and Apple. In a video interview with reporters, Google+ Games Product Manager Punit Soni explained that initially Google will share 95 percent of the revenue from virtual goods sold with the developers and keep only five percent for itself. That confirms what I originally reported hearing from sources last month. Soni said it could change in the future, but pricing today will be based on the company’s new in-app payments platform, which charges five percent for microtransactions on the Web (unlike the 30 percent Google charges on Android). While it’s obvious how this might make Facebook uncomfortable, it should also worry Apple, if there’s enough pressure from developers to shift the standard to something less rich.

The illusion of attention. You board the train, find a seat and open the latest bestseller by your favourite author. 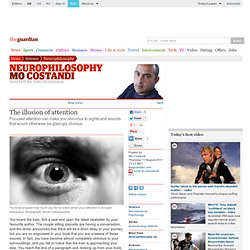 The couple sitting opposite are having a conversation, and the driver announces that there will be a short delay to your journey, but you are so engrossed in your book that you are unaware of these sounds. In fact, you have become almost completely oblivious to your surroundings, and you fail to notice that the train is approaching your stop. You reach the end of a paragraph and, looking up from your book, see the train pulling out of the station… Everyday experiences like this show us that focused attention has a significant effect on how we perceive the world and, therefore, on what enters into our conscious awareness.

Silicon Valley’s Undertaker: ‘We’re Anticipating a Major Fallout’ As longtime readers know, we occasionally like to check in with Sherwood Partners in Palo Alto, long known to industry insiders as “the undertaker” because its primary role is to efficiently shutter companies. 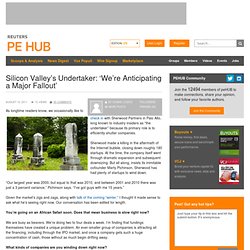 Sherwood made a killing in the aftermath of the Internet bubble, closing down roughly 180 startups. At the time, the company itself went through dramatic expansion and subsequent downsizing. But all along, insists its inimitable cofounder Marty Pichinson, Sherwood has had plenty of startups to wind down. “Our largest year was 2000, but equal to that was 2010, and between 2001 and 2010 there was just a 3 percent variance,” Pichinson says.