Video of the fake Apple Store, and customers' fight for a refund. We tip our hat to the intrepid American blogger who broke the story this week about an Apple store in Kunming, China, that turned out to be a fake. 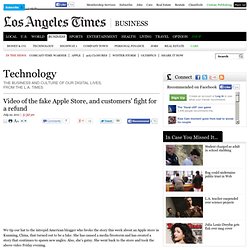 She has caused a media firestorm and has created a story that continues to spawn new angles. Also, she's gutsy. She went back to the store and took the above video Friday evening. On Succeeding Steve Jobs. Friday, 22 July 2011 On Wednesday, less than 30 minutes before Apple announced another record-breaking quarter of financial results, the Wall Street Journal published a story by Yukari Iwatani Kane, Joann S. 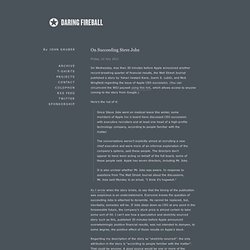 Lublin, and Nick Wingfield regarding the issue of Apple CEO succession. (You can circumvent the WSJ paywall using this link, which allows access to anyone coming to the story from Google.) Here’s the nut of it: Since Steve Jobs went on medical leave this winter, some members of Apple Inc.’s board have discussed CEO succession with executive recruiters and at least one head of a high-profile technology company, according to people familiar with the matter. As I wrote when the story broke, to say that the timing of the publication was suspicious is an understatement. Regarding my description of the story as “sketchily-sourced”: the only attribution in the story is “according to people familiar with the matter”. The more I think about this story, the worse it looks. Eric Schmidt. Google Bows to Web Rivals. What’s a book? It’s whatever you want it to be. As we’ve mentioned a number of times, the evolution of the book-publishing business has been accelerating recently, with more authors doing an end run around the traditional industry by self-publishing — or even setting up their own e-book stores, as Harry Potter creator J.K. 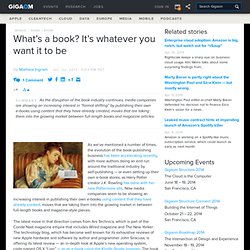 Rowling has done with her new Pottermore site. Now media companies seem to be showing an increasing interest in publishing their own e-books using content that they have already created, moves that are taking them into the growing market in between full-length books and magazine-style pieces. The latest move in that direction comes from Ars Technica, which is part of the Conde Nast magazine empire that includes Wired magazine and The New Yorker. A Bomb in Oslo? What Google Lost by Ending Real-Time Search - Nicholas Jackson - Technology. I had a sense that something was wrong pretty quickly. 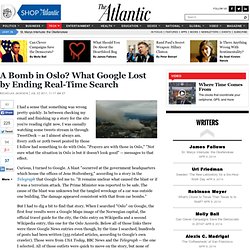 In between checking my email and finishing up a story for the site you're reading right now, I was casually watching some tweets stream in through TweetDeck -- as I almost always am. Test of corporate Google+ accounts scaled back. After first accelerating its plans for Google+ corporate accounts, Google said last night it's scaling back immediate tests of the feature. 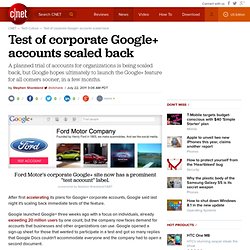 Google launched Google+ three weeks ago with a focus on individuals, already exceeding 20 million users by one count, but the company now faces demand for accounts that businesses and other organizations can use. Google opened a sign-up sheet for those that wanted to participate in a test and got so many replies that Google Docs couldn't accommodate everyone and the company had to open a second document. Google, no doubt keenly aware that the dominant social-networking company already has such an offering with Facebook pages, responded. Last week, Google product manager Christian Oestlien said Google was "accelerating our development plans" for Google+ corporate accounts . That meant Google would pick a number of business accounts this week and launch them next week. Why Google’s screwup on Google+ brand pages is a big deal. Google+ says it has fumbled business pages; blogs unhappy. After pulling the plug on Google+ pages set up for businesses on Thursday, Google laid out some details (and a bit of regret) on what it has done so far and hopes to do next to get companies, nonprofits, bands and other entities into the social network as soon as possible. 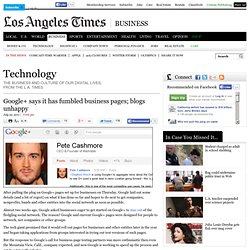 Almost two weeks ago, Google asked businesses eager to get started on Google+ to stay out of the fledgling social network. The reason? The Brilliance of Dwarf Fortress. More Signs of Google Plus Games Coming Soon: How Will G+ Gaming Differ From Facebook? Since the release of Google's new social network, there's been a lot of speculation about when and if Google Plus would get a gaming component. 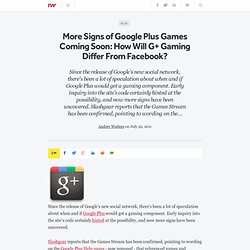 Early inquiry into the site's code certainly hinted at the possibility, and now more signs have been uncovered. Google Deletes Last 7 Years Of User's Digital Life, Shrugs. "Happy Birthday to You" copyright: Does the most infamous and resented copyright in musical history hold up to scrutiny? - By Paul Collins. Take pity on Florida musician Bobby Kent: He's a man trying to make a buck in the wrong era. In April, Kent filed a lawsuit over sports teams using that immortal fanfare: "Da-da-da-DA-da-DAA ...

Charge! " As old as it sounds, Kent claimed he wrote it in 1978 while serving as the musical director for the San Diego Chargers—and he had a 1980 copyright filing to back it up. The only cavalry fanfare Bobby Kent should play, it seems, is "Retreat. " The "Charge! " Its copyright retains an eternal power to provoke incredulity: Really? Good morning to you,Good morning to you,Good morning dear childrenGood morning to all. Written by Louisville kindergarten teachers Patty and Mildred Hill, "Good Morning to All" has long been in the public domain. The only close scholarly attention this remarkable claim has received remains a 2008 study by George Washington University law professor Robert Brauneis.

Their achievement was no accident. Professor Hill's complaint and testimony are a wonder of evasion. Q. The Fall of Bebo and Rise of Google+ – Email is Social’s Secret Weapon. By Ben Popper 7/22/11 9:09am Share this: "So if this doesn't work out, we can keep the money right? 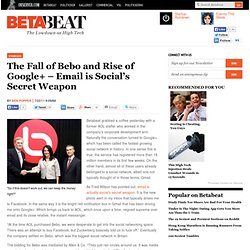 " Betabeat grabbed a coffee yesterday with a former AOL staffer who worked in the company’s corporate development arm. Naturally the conversation turned to Google+, which has been called the fastest growing social network in history. In one sense this is true, the service has registered more than 18 million members in its first few weeks.