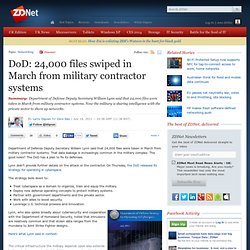 That data leakage is increasingly common in the military complex. The good news? The DoD has a plan to fix its defenses. Lynn didn't provide further details on the attack or the contractor. How do people look at Apple’s movie trailers page? Apple Trailers just begs to be eye tracked. Two weeks ago, we started an eye-tracking study of Apple’s iTunes movie trailers site. Originally, we had hoped to do a demographic breakdown of the study results — what posters did men like, what posters did women like, that sort of thing. Manning-Lamo Chat Logs Revealed. A little more than a year ago, Wired.com published excerpts from instant messenger chats between accused WikiLeaks source Bradley Manning and Adrian Lamo, the ex-hacker in whom he confided and who reported him to the authorities. 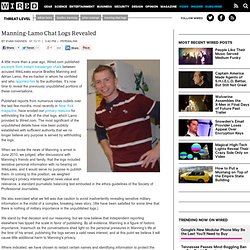 It’s now time to reveal the previously unpublished portions of these conversations. Published reports from numerous news outlets over the last few months, most recently in New York magazine, have eroded our primary reasons for withholding the bulk of the chat logs, which Lamo provided to Wired.com. Spotify: A Beginner's Guide - TNW Media. Showdown: Spotify vs. Rdio vs. Grooveshark vs. Pandora - TNW Apps. Music speaks what cannot be expressed, soothes the mind and gives it rest, heals the heart and makes it whole, flows from heaven to the soul. -Angela Monet Music, like travel and fine wine, is one of the greatest pleasures a human being can indulge in. In today’s rapidly changing digital landscape, we have a plethora of awesome options for discovering, sharing and enjoying music online, particularly in the U.S. Spotify: The Unicorn Has Landed... Posted by Tom Foremski - July 14, 2011 Last week RDIO CEO Drew Larner called Spotify a "unicorn" because so many people have spoken about its imminent launch but no one has seen it.

Thursday Spotify launched in the US with a bang, the music service is no longer mythical. However, the mythology around Spotify has certainly helped it gain awareness in key circles, especially judging by the more than 200 of my US Facebook friends that have jumped onto it. Microsoft will Never Drop the Windows Brand Name. Microsoft is not giving up the Windows brand name. Yes, there's a rumor that the venerable brand's days are numbered, or more properly, a notion—the idea that it could happen because someone, somewhere said as much to someone else. That notion is ridiculous, but not because anyone has told me so officially. One big Windows world. It's coming, but when and how? For months, rumors have been circulating that Microsoft was poised to make its "Windows Everywhere" world a reality.

But that reality is still a ways off, in spite of comments by Microsoft execs this week at the company's Worldwide Partner Conference about a unified ecosystem across phones, PCs and TVs. Here's the quote from Microsoft Windows Phone President Andy Lees from his partner-show keynote this week that has many buzzing: The Problem With Silicon Valley Is Itself - Entrepreneur. As a Brit who gave up cheerleading the European tech scene to make the pilgrimage to Silicon Valley to live, eat and breath the world’s leading hub for technology startup innovation, I’ve been largely unimpressed and disappointed by the quality of startups here.

The iPhone's Home Button. Twitter drives 4 times as much traffic as you think it does. Over the last few weeks, TechCrunch has run a couple posts using their own referrer logs to measure how sharing on various social services drives traffic. 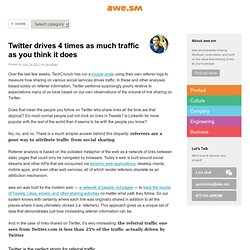 In these and other analyses based solely on referrer information, Twitter performs surprisingly poorly relative to expectations many of us have based on our own observations of the volume of link sharing on Twitter. Does that mean the people you follow on Twitter who share links all the time are that atypical?

Do most normal people just not click on links in Tweets? What Google's Famous Cafeterias Can Teach Us About Health - Life. A visit to the tech giant's headquarters reveals smart nutrition labeling and vending machines where healthier items are cheaper I'm just back from judging Google's first Science Fair for kids 13 to 18 at its corporate headquarters in California (yes, those are tomatoes growing in the foreground). 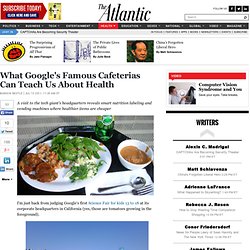 Google's famous food program Why famous? It is: Available 24/7Totally freeVaried and deliciousDesigned to promote health as well as environmental values (local, organic, sustainable) Google Plus: How Fast Is Google's New Social Network Growing? Facebook has over 750 million users. 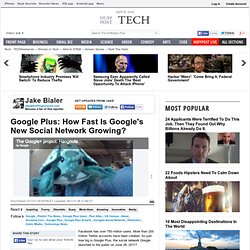 More than 200 million Twitter accounts have been created. So just how big is Google Plus, the social network Google launched to the public on June 28, 2011? Tech Boom Drives Turnover at Popular San Francisco Address.