For Everyone. We have some great news to share: we’ve removed the limits on free Readability accounts. 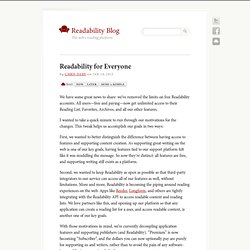 All users—free and paying—now get unlimited access to their Reading List, Favorites, Archives, and all our other features. I wanted to take a quick minute to run through our motivations for the changes. This tweak helps us accomplish our goals in two ways: First, we wanted to better distinguish the difference between having access to features and supporting content creation. As supporting great writing on the web is one of our key goals, having features tied to our support platform felt like it was muddling the message. Amazon launches iPad Kindle Store on the web, feels like a native app. Amazon today launched touch-optimized Kindle Store for iPad as a standalone web app accessed through the iOS Safari browser. 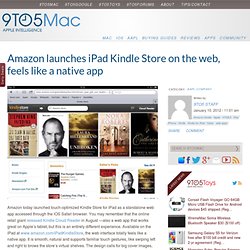 You may remember that the online retail giant released Kindle Cloud Reader in August —also a web app that works great on Apple’s tablet, but this is an entirely different experience. Available on the iPad at www.amazon.com/iPadKindleStore, the web interface totally feels like a native app. It is smooth, natural and supports familiar touch gestures, like swiping left and right to brows the store’s virtual shelves. The design calls for big cover images, large buttons and elegant typeface that’s easy on the eyes, unlike some other HTML5 web apps that feel cluttered on a 9.7-inch screen and cause eye strain… Some of the more prominent features include search, user reviews, detailed descriptions, many categories, quick links to the store’s various sections, including New York Times Bestsellers, Newsstand, Top 100 seller/freebies and more.

Indignant workers threaten suicide at Foxconn park in Wuhan｜Society. About 300 Foxconn employees threatened to kill themselves on Jan. 2 after being denied severance compensation promised by the company. 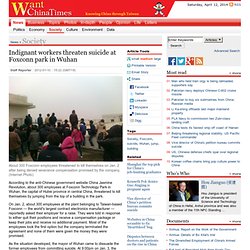 (Internet Photo) According to the anti-Chinese government website China Jasmine Revolution, about 300 employees at Foxconn Technology Park in Wuhan, the capital of Hubei province in central China, threatened to kill themselves by jumping from the top of a building in the park. On Jan. 2, about 300 employees at the plant belonging to Taiwan-based Foxconn — the world's largest contract electronics manufacturer — reportedly asked their employer for a raise. They were told in response to either quit their positions and receive a compensation package or keep their jobs and receive no additional payment. Most of the employees took the first option but the company terminated the agreement and none of them were given the money they were promised. Search, plus Your World. Google Search has always been about finding the best results for you. 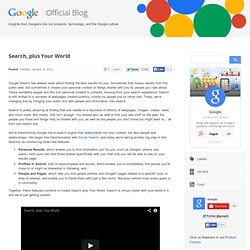 Sometimes that means results from the public web, but sometimes it means your personal content or things shared with you by people you care about. These wonderful people and this rich personal content is currently missing from your search experience. Search is still limited to a universe of webpages created publicly, mostly by people you’ve never met. Misdirection, Doublespeak, Non-Answers, And Straight Up Bad Decisions. God bless Danny Sullivan. 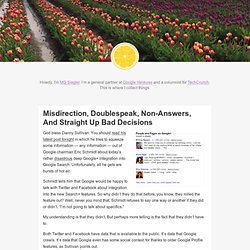 You should read his latest post tonight in which he tries to squeeze some information — any information — out of Google chairman Eric Schmidt about today’s rather disastrous deep Google+ integration into Google Search. Unfortunately, all he gets are bursts of hot air. Schmidt tells him that Google would be happy to talk with Twitter and Facebook about integration into the new Search+ features. Schmidt: Google+ Not Favored, Happy To Talk Twitter & Facebook Integration. Google executive chairman Eric Schmidt says Google+ content is not being favored over Twitter and Facebook by Google’s search engine. 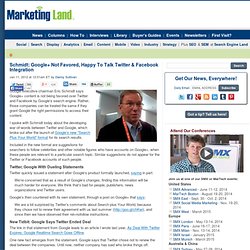 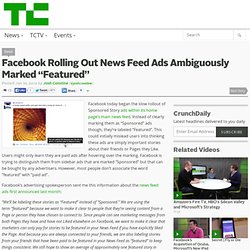 Instead of clearly marking them as “Sponsored” ads though, they’re labeled “Featured”. This could initially mislead users into thinking these ads are simply important stories about their friends or Pages they Like. Users might only learn they are paid ads after hovering over the marking. Facebook is trying to distinguish them from sidebar ads that are marked “Sponsored” but that can be bought by any advertisers. However, most people don’t associate the word “featured” with “paid ad”. Facebook’s advertising spokesperson sent me this information about the news feed ads first announced last month: “We’ll be labeling these stories as “Featured” instead of “Sponsored.” The act of purchasing a Sponsored Story news feed ad does mean increasing the prominence of content that could already appear in the news feed, which could be called “featuring a story”.

Samsung is refreshing the Series 5 Chromebook, releasing the Chromebox in Q2. Mozilla to build slow-paced Firefox for conservative users. Mozilla has embarked on its plan to build its Extended Support Release (ESR) version of Firefox, an edition that stands comparatively still while the ordinary version of the browser changes every six weeks. 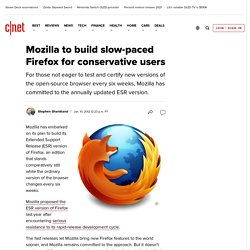