Barnes & Noble Exposes Microsoft's "Trivial" Patents and Strategy Against Android ~pj. It reveals the assertion of "trivial" and "invalid" patents against Barnes & Noble and some shocking details about an "oppressive" license agreement that would have controlled hardware and software design features that Microsoft presented, thus limiting to what degree Barnes & Noble could offer upgrades and improved features to its customers if it had signed it, features it says none of Microsoft's patents cover.

Microsoft worked so hard to keep it all secret, and I think you'll see why. It's ugly behind that curtain. We saw the letter to the ITC from Barnes & Noble, and the slide presentation to the US Department of Justice, attached as Exhibit C to the letter to the ITC, and both have been covered widely in the media. At Google X, a Top-Secret Lab Dreaming Up the Future. What Do You Want in the Future? Microsoft's Search Efforts Look Increasingly Futile As Google Gains Share For Second Month In A Row. The latest ComScore search numbers just came out, and Google continues to claw back market share. 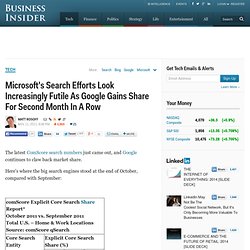 Here's where the big search engines stood at the end of October, compared with September: In other words, Google gained about 0.3% from Yahoo (which is powered by Bing). Microsoft itself grabbed 0.1% from Ask. But let's see how these tiny moves add up over time. Here's a chart from a couple months ago showing market share from November 2010 through August 2011: Comscore via Stifel Google's share bottomed out in August, and has been rising ever since.

Similarly, combined Yahoo-Bing market share peaked in August. Amazon Will Go Along with Internet Sales Tax After All - Business. Just a few months ago, the giant retailer was filing lawsuits and dropping affiliates to combat states trying to charge online sales tax. 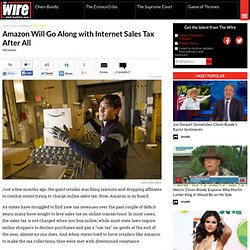 Now, Amazon is on board. As states have struggled to find new tax revenues over the past couple of deficit years, many have sought to levy sales tax on online transactions. In most cases, the sales tax is not charged when you buy online; while most state laws require online shoppers to declare purchases and pay a "use tax" on goods at the end of the year, almost no one does. And when states tried to force retailers like Amazon to make the tax collections, they were met with determined resistance.

Jeff Bezos Owns the Web in More Ways Than You Think. Amazon Kindle Fire review. It seems like ages since Amazon introduced us to the $199 Fire at a hectic New York City event, but in truth that was only about six weeks ago. 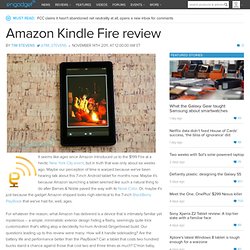 Maybe our perception of time is warped because we've been hearing talk about this 7-inch Android tablet for months now. Maybe it's because Amazon launching a tablet seemed like such a natural thing to do after Barnes & Noble paved the way with its Nook Color. REVIEW: Kindle Fire is no iPad killer - but it is a killer device. By ANDY IHNATKO ai@andyi.com November 13, 2011 11:48PM The Kindle Fire is shown at a news conference, Wednesday, Sept. 28, 2011 in New York. The e-reader and tablet has a 7-inch (17.78 cm) multicolor touchscreen and will go on sale for $199 on Nov. 15. (AP Photo/Mark Lennihan) storyidforme: 21221789 tmspicid: 6958775 fileheaderid: 3205757 Updated: December 20, 2013 3:02PM Take an iPad, solve its two biggest problems, and you’d hope to wind up with something exactly like Amazon’s Kindle Fire. The iPad and the Fire are by no means the same kind of device.

Lessons From the Failure of Flash: Greed Kills. Adobe's decision to stop development of mobile Flash has deservedly gotten a lot of attention online. 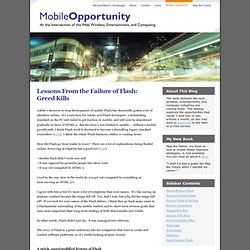 It's a sad story for Adobe and Flash developers: a dominating standard on the PC web failed to get traction in mobile, and will now be abandoned gradually in favor of HTML 5. But the story's not limited to mobile -- without a mobile growth path, I think Flash itself is destined to become a dwindling legacy standard everywhere (link).