Best of the Weekend 1

U.S. Underwrites Internet Detour Around Censors Abroad - NYTimes.com (Build 20110413222027) The effort includes secretive projects to create independent cellphone networks inside foreign countries, as well as one operation out of a spy novel in a fifth-floor shop on L Street in Washington, where a group of young entrepreneurs who look as if they could be in a garage band are fitting deceptively innocent-looking hardware into a prototype “Internet in a suitcase.” 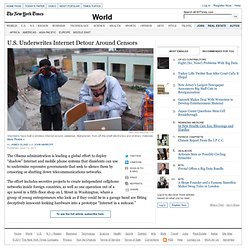 Financed with a $2 million State Department grant, the suitcase could be secreted across a border and quickly set up to allow wireless communication over a wide area with a link to the global Internet. The American effort, revealed in dozens of interviews, planning documents and classified diplomatic cables obtained by The New York Times, ranges in scale, cost and sophistication. Some projects involve technology that the United States is developing; others pull together tools that have already been created by hackers in a so-called liberation-technology movement sweeping the globe. The Invisible Web Then there was Mr. Mr. Steve Jobs' first dream for an Apple headquarters: Coyote Valley, San Jose - San Jose Mercury News (Build 20110413222027) Cupertino was not Steve Jobs' first choice for a state-of-the-art Apple headquarters. 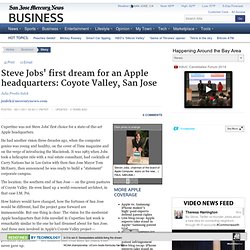 He had another vision three decades ago, when the computer genius was young and healthy, on the cover of Time magazine and on the verge of introducing the Macintosh. It was 1983 when Jobs took a helicopter ride with a real estate consultant, had cocktails at Carry Nations bar in Los Gatos with then-San Jose Mayor Tom McEnery, then announced he was ready to build a "statement" corporate campus. The location: the southern end of San Jose -- on the green pastures of Coyote Valley. He even lined up a world-renowned architect, in that case I.M. Pei. How history would have changed, how the fortunes of San Jose would be different, had the project gone forward are immeasurable.

Drinks and dreams It was late winter or early spring in 1983 when McEnery met Jobs at the London Oyster House on Main Street in Los Gatos before heading to a corner table at Carry Nations. Jobs, who had already hired I.M. Sophisticated Cyberattack Is Reported by the I.M.F. - NYTimes.com (Build 20110413222027) The +1 Button Is Like A Button You Push For A Treat — Without The Treat (Build 20110413222027) You people confuse me.

Ten days ago we put Google’s +1 Button on TechCrunch — because why not? We try basically all these new buttons/counters/commenting systems much to the dismay of our precious page load speed (we know, we know, it sucks — fix coming). Some of these buttons are great and make a lot of sense. The Tweet Button, the Like Button, even Facebook’s new Send button. When Engineers Lie - Cringely on technology (Build 20110413222027) Digital Black Friday: First Bitcoin "Depression" Hits (Build 20110413222027) Much like the New York Stock Exchange, Bitcoin exchanges have suffered from their first massive loss -- a virtual "Black Friday", so to speak. 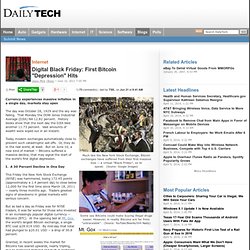 (Source: Google Images) Some say Bitcoins could make buying illegal drugs easier. However, in reality Bitcoins are far from "untraceable". (Source: YouTube/Beardo/Dirt Nasty) Mt. Currency experiences massive inflation in a single day, markets stay open The day was October 28, 1929 and the sky was falling. Today modern exchanges automatically close to prevent such catastrophic sell offs. I. This Friday the New York Stock Exchange (NYSE) was hammered, losing 172.45 points (approximately a 1.4 percent dip) to close below 12,000 for the first time since March 18, 2011 -- nearly three months ago. 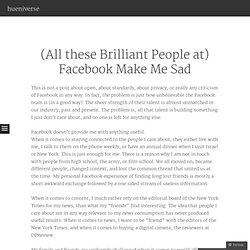 In fact, the problem is just how unbelievable the Facebook team is (in a good way). The sheer strength of their talent is almost unmatched in our industry, past and present. The problem is, all that talent is building something I just don’t care about, and no one is left for anything else. Facebook doesn’t provide me with anything useful. When it comes to staying connected to the people I care about, they either live with me, I talk to them on the phone weekly, or have an annual dinner when I visit Israel or New York.

When it comes to content, I much rather rely on the editorial board of the New York Times for my news, than what my “friends” find interesting. My family and friends are uniformly challenged when it comes to world affairs or digital cameras. I am in no way suggesting that almost 600 million people are wrong. Why did Apple choose Twitter over Facebook? (Build 20110413222027) Apple will deeply integrate Twitter into iOS 5 when it releases this Fall, but not Facebook. 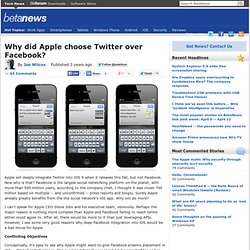 Now why is that? Facebook is the largest social networking platform on the planet, with more than 500 million users, according to the company (Hell, I thought it was closer 700 million based on multiple -- and unconfirmed -- press reports and blogs). Microsoft's Bill Gates: A rare and remarkable interview with the world's second richest man. By CAROLINE GRAHAM in SEATTLE Created 7:58 PM on 9th June 2011 'It will be a minuscule portion of my wealth. 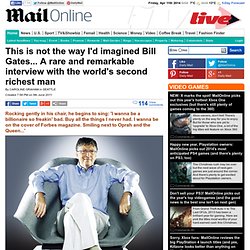 It will mean they (his children) have to find their own way. They will be given an unbelievable education... But they will have to pick a job they like and go to work,' said Bill Gates Travie McCoy and Bruno Mars’s hit Billionaire reached No 3 on both sides of the Atlantic last year. At 55, he has graced the cover of Forbes magazine many times. The Math of TechCrunch, Part 1: Is TechCrunch Still About Startups? (Build 20110413222027)