28% of US smartphone owners use them as primary 'Net connection. Just over a third of American adults own a smartphone of some kind, with many preferring to use it as their primary connection to the Internet. 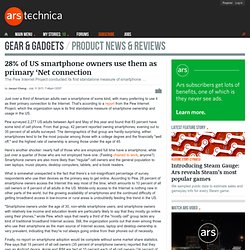 That's according to a report from the Pew Internet Project, which the organization says is its first standalone measure of smartphone ownership and usage in the US. Pew surveyed 2,277 US adults between April and May of this year and found that 83 percent have some kind of cell phone. From that group, 42 percent reported owning smartphones, evening out to 35 percent of all adults surveyed. The demographics of that group are hardly surprising, either: smartphones tend to be the most popular among those with a college degree and the financially "well off," and the highest rate of ownership is among those under the age of 45. Get your hands off that contact info, says Facebook. Post by Bill Gross. I predict that Google+ will go from 0 to 100,000,000 users faster than any other service in history. 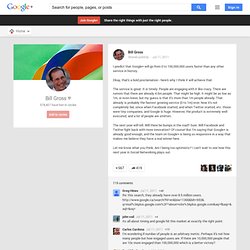 Okay, that's a bold proclamation - here's why I think it will achieve that. The service is great. It is timely. People are engaging with it like crazy. There are rumors that there are already 4.5m people. The next year will tell. A Google Wave Engineer Talks about Plus. There's no shortage of punditry around the future and fate of Google+, a massive social networking effort from Google. 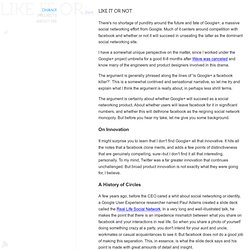 Much of it centers around competition with facebook and whether or not it will succeed in unseating the latter as the dominant social networking site. I have a somewhat unique perspective on the matter, since I worked under the Google+ project umbrella for a good 6-8 months after Wave was canceled and know many of the engineers and product designers involved in this drama. The argument is generally phrased along the lines of 'is Google+ a facebook killer? '. Google+ Circles? More Like a Hole. By Guest Post 7/11/11 11:44am Share this: This is a guest post by Brooklyn-based writer, editor, and programmer Paul Ford, originally published on his blog, Ftrain.com. 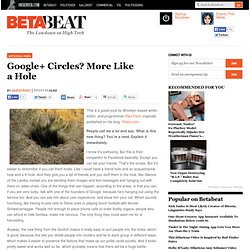 People call me a lot and say: What is this new thing? You’re a nerd. Explain it immediately. I know it’s confusing. Google+: Too many eggs in the Google basket. Google+ Vs. Twitter: A Personal View. As Google+ goes into its second week of life, how’s the service doing? 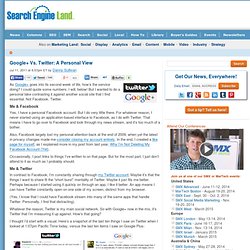 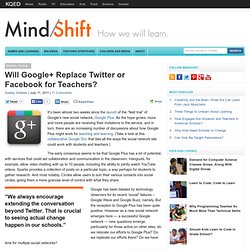 As the hype grows, more and more people are receiving their invitations to the service, and in turn, there are an increasing number of discussions about how Google Plus might work for teaching and learning. (Take a look at this collaborative Google Doc that lists all the ways the social network site could work with students and teachers.) The early consensus seems to be that Google Plus has a lot of potential, with services that could aid collaboration and communication in the classroom. 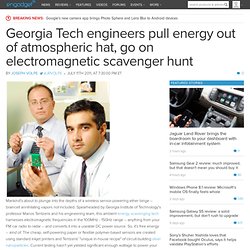 By scavenging this ambient energy from the air around us, the technique could provide a new way to power networks of wireless sensors, microprocessors and communications chips. Outgunned Google accuses rivals of ganging up - Business Analysis & Features, Business. Google Ventures Scaling Up With More Cash, ‘Googlers In Residence’ - Venture Capital Dispatch.

How To Build An Audience On The Internet: The Kevin Rose School Vs. The Fred Wilson School. Editor’s note: This guest post is written by Tom Anderson, the former President, founder and first friend on MySpace. 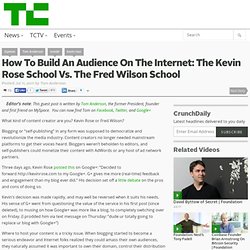 You can now find Tom on Facebook, Twitter, and Google+ What kind of content creator are you? Kevin Rose or Fred Wilson? Blogging or “self-publishing” in any form was supposed to democratize and revolutionize the media industry. Content creators no longer needed mainstream platforms to get their voices heard.