Villagers with Pitchforks : Did Recession Breed the New Blogger? In December 2007, the US economy was at its worst as unemployment was at an all time high, the federal debt crisis became shockingly real, and home foreclosures were an epidemic across the nation. 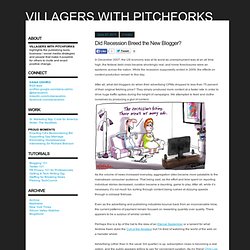 While the recession supposedly ended in 2009, the effects on content production remain to this day. After all, what did bloggers do when their advertising CPMs dropped to less than 75 percent of their original fetching price? They simply produced more content at a faster rate in order to drive huge traffic spikes during the height of campaigns. We attempted to feed and clothe ourselves by producing a glut of content. As the volume of news increased everyday, aggregation sites became more palatable to the mainstream consumer audience. Firefox update policy: the enterprise is wrong, not Mozilla. 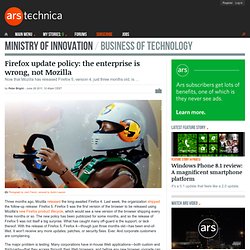 Last week, the organization shipped the follow-up release: Firefox 5. Firefox 5 was the first version of the browser to be released using Mozilla's new Firefox product lifecycle, which would see a new version of the browser shipping every three months or so. The new policy has been publicized for some months, and so the release of Firefox 5 was not itself a big surprise. What has caught many off-guard is the support, or lack thereof. With the release of Firefox 5, Firefox 4—though just three months old—has been end-of-lifed. The major problem is testing. Testing overhead That makes things awkward for the companies who need to validate browser releases. This has some corporate users of the browser feeling very unhappy. These enterprise customers are plainly unhappy, and some commentators are suggesting that Mozilla is alienating its enterprise customers and in effect signing its own death warrant.

E-Reader Ownership Doubled in 6 Months, Growing Faster than Tablets. Ownership of e-readers is exploding, according to a survey by Pew Internet Research. 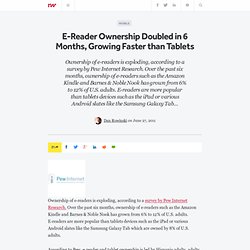 Over the past six months, ownership of e-readers such as the Amazon Kindle and Barnes & Noble Nook has grown from 6% to 12% of U.S. adults. E-readers are more popular than tablets devices such as the iPad or various Android slates like the Samsung Galaxy Tab which are owned by 8% of U.S. adults. According to Pew, e-reader and tablet ownership is led by Hispanic adults, adults younger than the age of 65, parents of children below the age of 18, college graduates and households with and income of at least $75,000. 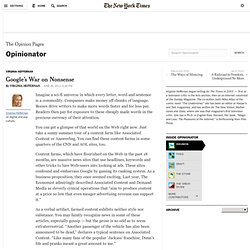 Companies make money off chunks of language. Bosses drive writers to make more words faster and for less pay. Readers then pay for exposure to these cheaply made words in the precious currency of their attention. LulzSec Hacker Group Urges New Cyberattacks. But security experts said on Sunday that the dissolution of the group might not signal an end to the attacks, which have hit dozens of Web sites, including those of prominent targets like the Central Intelligence Agency, the United States Senate, the Arizona state police and Sony. 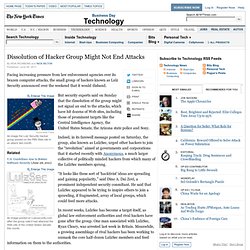 Indeed, in its farewell message posted on Saturday, the group, also known as LulzSec, urged other hackers to join the “revolution” aimed at governments and corporations that it started recently with , a much larger collective of politically minded hackers from which many of the LulzSec members sprung. “It looks like these sort of ‘hacktivist’ ideas are spreading and gaining popularity,” said Dino A. Dai Zovi, a prominent independent security consultant. Report: Apple is building two (!) iPhones for September release. An analyst expects Apple to launch both an iPhone 5 and a mid-range iPhone 4S Click to enlarge. 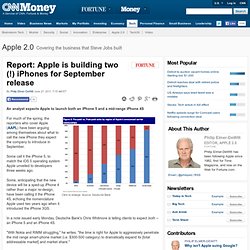 Source: Deutsche Bank For much of the spring, the reporters who cover Apple (AAPL) have been arguing among themselves about what to call the new iPhone they expect the company to introduce in September. Some call it the iPhone 5, to match the iOS 5 operating system Apple unveiled to developers three weeks ago. Some, anticipating that the new device will be a sped-up iPhone 4 rather than a major re-design, have been calling it the iPhone 4S, echoing the nomenclature Apple used two years ago when it introduced the iPhone 3GS. In a note issued early Monday, Deutsche Bank's Chris Whitmore is telling clients to expect both -- an iPhone 5 and an iPhone 4S. "With Nokia and RIMM struggling," he writes, "the time is right for Apple to aggressively penetrate the mid range smart-phone market (i.e. $300-500 category) to dramatically expand its [total addressable market] and market share.

" New Service Adds Your Drunken Facebook Photos To Employer Background Checks, For Up To Seven Years. You Can’t Make Money Charging $1 Per Month. If you're trying to grow your startup you've come to the right place. 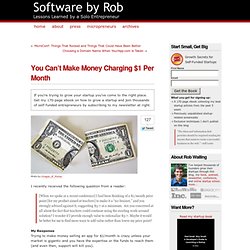 Get my 170-page ebook on how to grow a startup and join thousands of self-funded entrepreneurs by subscribing to my newsletter at right. Photo by Images_of_Money I recently received the following question from a reader: Groupon May Expire Sooner Than Expected. An Open Letter to LivingSocial: Learn from Groupon’s International Mistakes. Another day, another unfortunate piece of news out of Groupon’s international operations. 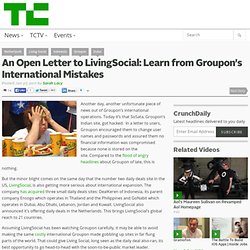 Today it’s that SoSata, Groupon’s Indian site, got hacked. In a letter to users, Groupon encouraged them to change user names and passwords and assured them no financial information was compromised because none is stored on the site.