The Benefits of CBD for Skincare - The Wörd. We often hear about the balancing effects of CBD on the mind and the mood, but research shows that this natural extract also has significant benefits for skincare issues. 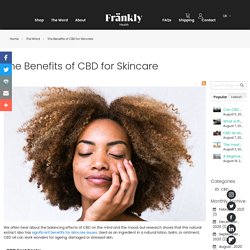 Used as an ingredient in a natural lotion, balm, or ointment, CBD oil can work wonders for ageing, damaged or stressed skin. Humans have a complex system of cannabinoid receptors which run throughout our bodies – including our skin – known as the endocannabinoid system (ECS). This system helps to regulate many physiological processes - including stress, sleep, immune system function, pain and stress. Our bodies make their own cannabinoids that activate the system, but using plant-based cannabinoids can help to enhance its healing effects.

CBD is known for having anti-inflammatory and pain-relieving properties, making it suitable for treating a variety of common skincare complaints. Acne: When excess oil, dirt and dead skin cells build up they can clog the pores and create an environment for acne-causing bacteria to grow. What dosage of CBD is right for you? - The Wörd. CBD’s popularity has skyrocketed in recent years, with many championing its various health benefits. 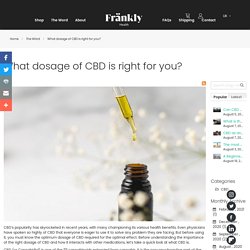 Even physicians have spoken so highly of CBD that everyone is eager to use it to solve any problem they are facing. What You Need to Know Before Traveling with CBD Products - The Wörd. Should A Recovering Addict Use CBD? - The Wörd. Introduction to CBD CBD is a naturally occurring chemical found in marijuana plants. 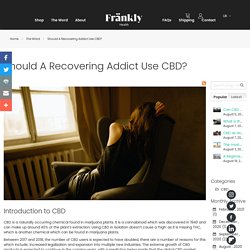 It is a cannabinoid which was discovered in 1940 and can make up around 40% of the plant’s extraction. Using CBD in isolation doesn’t cause a ‘high’ as it is missing THC, which is another chemical which can be found in marijuana plants. Between 2017 and 2018, the number of CBD users is expected to have doubled, there are a number of reasons for this which include; increased legalization and expansion into multiple new industries. Is CBD an antibiotic? What scientists are studying - The Wörd. We explore the history of antobiotics, and how recent studies have shown that CBD products could play an important role as an antibiotic in the treatment of specific conditions. 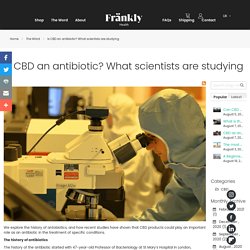 The history of antibiotics The history of the antibiotic started with 47-year-old Professor of Bacteriology at St Mary’s Hospital in London, Alexander Fleming, forgot a petri dish in the laboratory when going on leave. He had been experimenting on the influenza virus, and on his return discovered a mold had formed in the petri dish. He studied this mold and ‘accidentally’ discovered penicillin, which he then researched further as a potential anti-septic. More than a decade would pass before German pathologist and bacteriologist, Gerhard Domagk developed Sulfonamidochrysoidine, the world’s first commercially available anti-biotic. Since then, antibiotics have become more and more commonly used, with doctors prescribing them for a number of bacterial infections from urinary tract infections to some pneumonias.

5 Things Every CBD Tincture Consumer Should Know - The Wörd. 1) What is CBD? 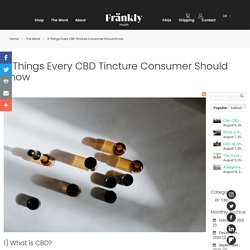 CBD stands for ‘cannabidiol’, which are naturally present in the Cannabid Sativa plant, commonly known as hemp or marijuana. While many other plants contain ‘cannabimimetics’ -- substances that produce similar effects to CBD -- only cannabis creates the real deal. Marijuana became famous in popular culture for its psychoactive effects, so many people incorrectly assume that any product from a marijuana plant will get you high. This is simply untrue. You wouldn’t get high wearing clothing made of hemp fibers, and CBD won’t make you stoned, either.

People who use CBD tout a wide range of benefits, and studies are still ongoing. 2) What is a 'tincture'? Any time a plant or animal product has been dissolved into ethanol (pure alcohol), the resulting liquid is called a 'tincture'. CBD tincture, then, is components of the Cannabid Sativa plant, dissolved in alcohol, and concentrated to form a stable solution -- generally about 60-70% alcohol. A Beginner’s Handbook to the World of CBD - The Wörd. A fledgling industry awakens The CBD industry is shrouded in something that could almost be called a mythology. 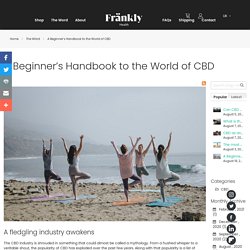 From a hushed whisper to a veritable shout, the popularity of CBD has exploded over the past few years. Along with that popularity is a list of beneficial claims so large that it would put any wonder-drug to shame. CBD as an alternative treatment for pets - The Wörd. An alternative medicinal therapy We always want the best for our pets. 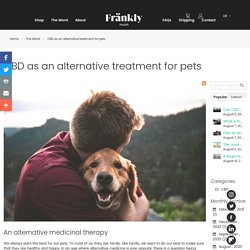 To most of us, they are family. Like family, we want to do our best to make sure that they are healthy and happy. In an age where alternative medicine is ever popular, there is a question being asked more and more of veterinarians by pet owners seeking to improve the life of their beloved animal companions. What is the hype about CBD? - The Wörd. CBD, short for Cannabidiol, is a naturally occurring substance found in almost all varieties of cannabis plants. 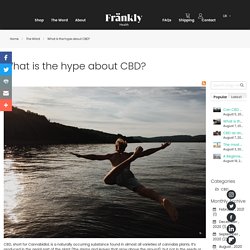 It’s produced in the aerial part of the plant (the stems and leaves that grow above the ground), but not in the seeds or roots. While it is currently a hot topic, and being tested and experimented with widely, Cannabis was first reported to be used for pharmacological reasons around 2600BC in China. Can CBD play a role in treating heroin addiction? - The Wörd. A new study suggests that cannabidol (CBD), can be used as part of a treatment for heroin and opioid addiction. 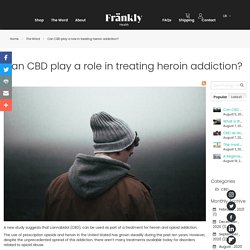 The use of prescription opioids and heroin in the United Stated has grown steadily during the past ten years. However, despite the unprecedented spread of this addiction, there aren’t many treatments available today for disorders related to opioid abuse. As an attempt to address the lack of treatment, a study in the Icahn School of Medicine at Mount Sinai tested whether CBD, which comes from the cannabis plant, can be used to reduce anxiety and cravings in individuals suffering from heroin addiction. The study’s findings suggest that this non-psychoactive chemical could work similarly to the existing FDA-approved medication used to treat addiction. The most common questions about CBD answered - The Wörd.

While Cannabidiol, or CBD, is the millennial product of the moment, many questions may arise as to what it is, why use it and how it affects the human body. 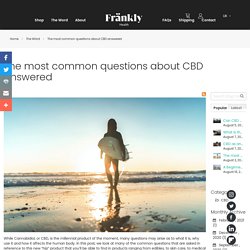 In this post, we look at many of the common questions that are asked in reference to this new “hip” product that you’ll be able to find in products ranging from edibles, to skin care, to medical drugs. Pros and cons of CBD Oil for pain. Public Profile for Frankly Health. Cbd extract oil 5 v1. Order CBD Oil Online.