I’m a writer interested in scientific studies, and I contribute articles related to medical, healthcare, business, and a lot more. 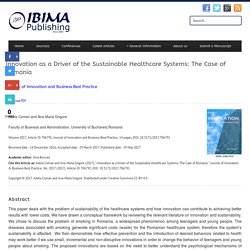 Adela Coman and Ana-Maria Grigore. Distributed under Creative Commons CC-BY 4.0 Abstract This paper deals with the problem of sustainability of the healthcare systems and how innovation can contribute to achieving better results with lower costs. Keywords: sustainable healthcare system, disruptive and non-disruptive innovation, desired behaviors, sticky message. Introduction By sustainable healthcare system we understand that system that ensures the right balance between the cultural, social and economic areas – an environment designed to cover the individuals’ health needs (from the promotion of health and preventing illnesses to restoring health and dying). 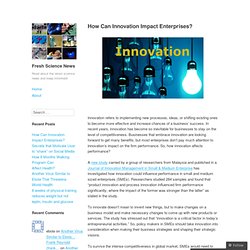 In recent years, innovation has become so inevitable for businesses to stay on the level of competitiveness. Businesses that embrace innovation are looking forward to get many benefits, but most enterprises don’t pay much attention to innovation’s impact on the firm performance. So, how innovation affects performance? Secrets that Motivate User to “share’’ on Social Media – Fresh Science News. How 6 Months Walking Program Can Affect Health? – Fresh Science News. Physical activity is one of the healthiest things you can do to help maintain a good health, and being physically active on a regular basis is beneficial for your health and prevents many health problems. 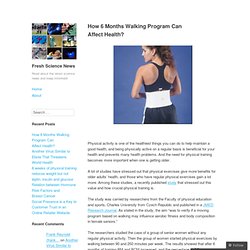 And the need for physical training becomes more important when one is getting older. A lot of studies have stressed out that physical exercises give more benefits for older adults’ health, and those who have regular physical exercises gain a lot more. Among these studies, a recently published study that stressed out this value and how crucial physical training is. The study was carried by researchers from the Faculty of physical education and sports, Charles University from Czech Republic and published in a JMED Research Journal. As stated in the study, the aim “was to verify if a moving program based on walking may influence aerobic fitness and body composition in female seniors.” The researchers studied the case of a group of senior women without any regular physical activity. Other Virus Similar to Ebola That Threatens World Health – Fresh Science News.

Since the spread of Ebola virus in West Africa last March, more than 1900 have passed, according to the World Health Organization (WHO). 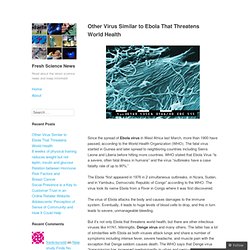 The fatal virus started in Guinea and later spread to neighboring countries including Sierra Leone and Liberia before hitting more countries. WHO stated that Ebola Virus “is a severe, often fatal illness in humans” and the virus “outbreaks have a case fatality rate of up to 90%.” The Ebola “first appeared in 1976 in 2 simultaneous outbreaks, in Nzara, Sudan, and in Yambuku, Democratic Republic of Congo” according to the WHO. The virus took its name Ebola from a River in Congo where it was first discovered. The virus of Ebola attacks the body and causes damages to the immune system. But it’s not only Ebola that threatens world health, but there are other infectious viruses like H1N1, Meningitis, Denge virus and many others.

The world’ attention now is turned to Ebola virus, but there are several other viruses that aren’t less dangerous than Ebola. 8 weeks of physical training reduces weight but not leptin, insulin and glucose – Fresh Science News. Obesity plays a key role in developing diabetes as there’s a relation between serum leptin made by fat cells and insulin. 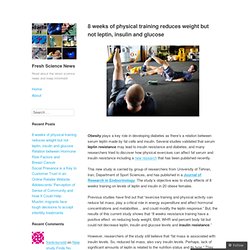 IBIMA Publishing. This 12-month, randomised study of individuals with established type 2 diabetes investigated whether dietary advice emphasising a single message to reduce fat intake, would improve weight loss, glycaemic and lipid control, compared to advice based on the once traditional low-fat, low-sucrose message. 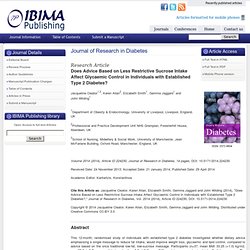 Participants (n=37, mean BMI 33.25 (+1.0) kg/m2, age 58.0 (+3.3) years, diabetes duration 6.8 (±0.9) yrs, 51% male), were randomised into 2 dietary groups. The ‘moderate-sucrose’ group (n=19) were advised to reduce total fat intake only; the ‘low-sucrose’ group (n=18), to reduce both total fat and total sugar intake. IBIMA Publishing. Assess the perceptions of personal trainers regarding the use of obesity-fighting medications in addition to diet and exercise and compare with an American sample. 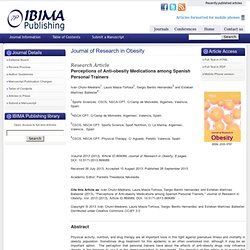 A questionnaire based in a 7-point scale was administered to 31 experienced personal trainers in Spain who currently had obese clients (classified by OMS´values for BMI≥ 30 Kg/m2).The results show 87% of the personal trainers who responded knew of at least one anti-obesity product, and only one third of them had customers undergoing drug treatment. The personal trainers perceived the importance of physical exercise as high (6.65), and they perceived the importance of drug treatment as comparatively low (3.13). They rated the importance of their own role in the battle against obesity as low (2.77), and believed that more education was required to better serve their obese clients (6.35). Keywords: Body mass index, exercise, obesity, behavior, personal trainer. Introduction Procedure. Relation between Hormone Risk Factors and Breast Cancer – Fresh Science News.

Breast Cancer is one of the most cancers that affect females over the world and the death rate of the disease reaches 18.2% worldwide including both in men and women. 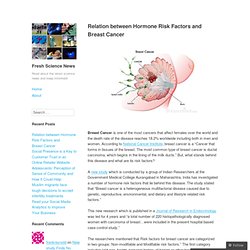 According to National Cancer Institute, breast cancer is a “Cancer that forms in tissues of the breast. The most common type of breast cancer is ductal carcinoma, which begins in the lining of the milk ducts.” But, what stands behind this disease and what are its risk factors? A new study which is conducted by a group of Indian Researchers at the Government Medical College Aurangabad in Maharashtra, India has investigated a number of hormone risk factors that lie behind this disease. The study stated that “Breast cancer is a heterogeneous multifactorial disease caused due to genetic, reproductive, environmental, and dietary and lifestyle related risk factors.” The researchers mentioned that Risk factors for breast cancer are categorized in two groups: Non-modifiable and Modifiable risk factors.”