Frank Averill, CEO of Averill Electric, Looks at Applying the 5S Methodology in the Construction Field. While the pandemic has destabilized supply chains, reduced scope of work, and stalled — or in some cases completely scrapped — schedules and plans, the outlook remains bright for the contracting field. 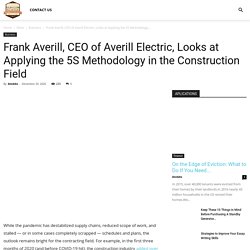 For example, in the first three months of 2020 (and before COVID-19 hit), the construction industry added over $900 billion to the US economy, which was the highest quarterly increase since the “Great Recession” in 2008. Analysts also predict that despite a sharp decline in 2020, the North American construction industry should resume its pre-pandemic growth trajectory and grow at a healthy 4.2% clip through 2024. Frank Averill. Frank Averill of Averill Electric Company Inc. Releases A Guide to Electrical Prefabrication. EASTON, MA / ACCESSWIRE / December 15, 2020 / Frank Averill, the Chief Executive Officer and Owner of Averill Electric takes the time to discuss the benefits of prefabrication, stating that the process is currently transforming the construction and electrical contracting sector. 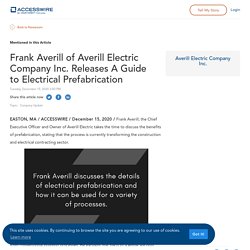 In his "Concise Guide to Prefabrication" Frank highlights how the method differs from conventional building processes. He explains that parts of a whole are built off-site and transported to the final destination, as opposed to having individual materials shipped to the site where the structure is built from the ground up. Having worked on several major projects in the New England area including the Ray and Joan Kroc Community Centre, the area's largest social services development project, and the Emerson College Colonial Building Dormitory, Frank Averill is intimately familiar with the benefits of prefabrication for simple and complex electrical systems alike.

Averill Electric Employs the Advantages of Prefabricated Construction. How prefabrication is changing the electrical industry A select few electrical contractor companies are beginning to take advantage of prefabrication construction techniques in order to create new high standards of efficiency. 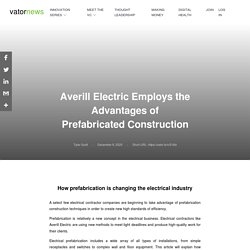 Prefabrication is relatively a new concept in the electrical business. Electrical contractors like Averill Electric are using new methods to meet tight deadlines and produce high-quality work for their clients. Electrical prefabrication includes a wide array of all types of installations, from simple receptacles and switches to complex wall and floor equipment. This article will explain how prefabrication is used in the electrical industry and how it is a significant improvement from conventional construction methods.

What is Prefabrication? Frank Averill Provides a Concise Guide to Prefabrication. Advertisements Why the Use of Prefabrication is Transforming the Construction Industry and the Electrical Contracting Sector is Leading the Way On a conventional, by-the-numbers construction site, raw materials are brought to the location of a project and then field measured, modified, cut, and altered to the exact project requirements and installed in a sequential manner, eventually amounting to a finished product. 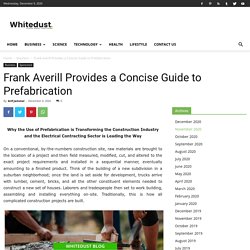 Think of the building of a new subdivision in a suburban neighborhood; once the land is set aside for development, trucks arrive with lumber, cement, bricks, and all the other constituent elements needed to construct a new set of houses. Laborers and tradespeople then set to work building, assembling and installing everything on-site. Traditionally, this is how all complicated construction projects are built. However, lately, there has been a shift away from this method of construction in favor of a process called prefabrication. What is Prefabrication? Project Duration Quality. Averill Electric Is Taking Electrical Contracting to a New Standard. It is an unfortunate fact that the construction business can often be slow-moving, overly complex, and immensely inefficient. 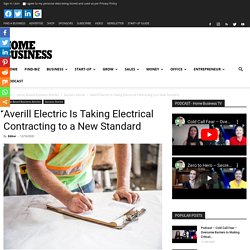 As anyone who works in these trades can attest, a typical day of work can be fraught with miscommunication and misallocation of resources. The result of which is usually a lengthier and more expensive construction project for all parties involved. President and founder of Averill Electric Company. Averill Electric Co., Inc. - Home. Frank Averill, CEO of Averill Electric, Highlights the Fundamentals of 5S Methodology in the Construction Field. The 5S methodology was introduced in the 1970s by Toyota to enhance visual control and lean manufacturing processes. 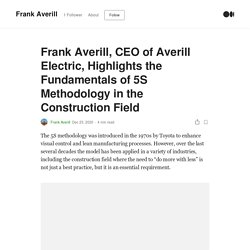 However, over the last several decades the model has been applied in a variety of industries, including the construction field where the need to “do more with less” is not just a best practice, but it is an essential requirement. What is the 5S methodology? The 5S methodology is a workplace organization method. Each of the 5S’s refers to a Japanese rather than English word. The roster as it was originally introduced was: Seiri, Seiton, Seiso, Seiketsu, and Shitsuke, translated to: organize, orderliness, cleanliness, standardize, and discipline.

There is no generic one-size-fits-all template that precisely instructs businesses on how, for example, to integrate “organize” into their work environment and processes. Organize Being organized in this context doesn’t just mean, as the old saying goes, “having a place for everything, and everything in its place.” Orderliness.