4 Billionaires are Extremely Worried that America’s Next Big Financial Crisis is Coming Soon. 04.01.2015 BY Mike Palmer, Stansberry Research This story is developing quickly. 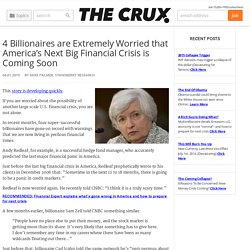 If you are worried about the possibility of another large scale U.S. financial crisis, you are not alone. In recent months, four super-successful billionaires have gone on record with warnings that we are now living in perilous financial times. Andy Redleaf, for example, is a successful hedge fund manager, who accurately predicted the last major financial panic in America.

Just before the last big financial crisis in America, Redleaf prophetically wrote to his clients in December 2006 that: “Sometime in the next 12 to 18 months, there is going to be a panic in credit markets.” Lixil serves up a new style of Japanese multinational. Why We Can't 'Motivate' Engagement. Facebook’s deal with New York Times, BuzzFeed: Why the media should resist it, and why it can’t. Photo illustration by Juliana Jiménez Jaramillo. 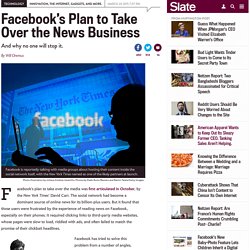 Photos by Dado Ruvic/Reuters and Ramin Talaie/Getty Images. Facebook’s plan to take over the media was first articulated in October, by the New York Times’ David Carr. The social network had become a dominant source of online news for its billion-plus users. But it found that those users were frustrated by the experience of reading news on Facebook, especially on their phones. It required clicking links to third-party media websites, whose pages were slow to load, riddled with ads, and often failed to match the promise of their clickbait headlines.

10 secrets of building a great team. Matrix Is the Ladder to Success. Pro: Look at the Track Record by Jay R. 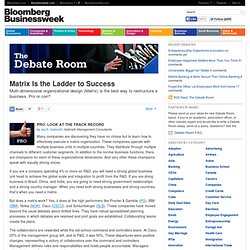 Galbraith, Galbraith Management Consultants Many companies are discovering they have no choice but to learn how to effectively execute a matrix organization. These companies operate with multiple business units in multiple countries. They distribute through multiple channels to different customer segments. Adidas Group - Profile. Brand portfolio No other brand has a more distinguished history and stronger connection with sport than adidas. 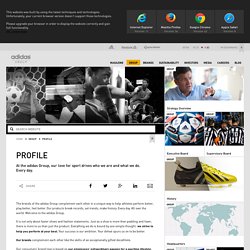 It is our mission to be the best sports brand in the world. Everything we do is rooted in sport. This is what “The Badge of Sport” stands for as a brand mark. It is the sharp end of our spear, seen on innovative products, as well as with the world’s best athletes, teams and events. adidas Sport Performance. Samsung Buys LoopPay to Challenge Apple in Mobile-Payments - Bloomberg Business. (Bloomberg) -- Samsung Electronics Co. is acquiring LoopPay Inc. to gain a bigger toehold in mobile payments, a market that’s already luring its main rival Apple Inc. 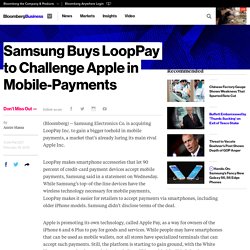 LoopPay makes smartphone accessories that let 90 percent of credit-card payment devices accept mobile payments, Samsung said in a statement on Wednesday. While Samsung’s top-of-the-line devices have the wireless technology necessary for mobile payments, LoopPay makes it easier for retailers to accept payments via smartphones, including older iPhone models. Samsung didn’t disclose terms of the deal. Apple is promoting its own technology, called Apple Pay, as a way for owners of the iPhone 6 and 6 Plus to pay for goods and services.

While people may have smartphones that can be used as mobile wallets, not all stores have specialized terminals that can accept such payments. Other companies competing in mobile payments include Google Inc., with Google Wallet, and EBay Inc.’s PayPal. Transformational Leadership Vs. Transactional Leadership Definition. 4 Workplace Trends for 2015 - Daley And Associates, LLC. Industry leaders are constantly implementing new, innovative workplace solutions to maximize their employee and company performance. 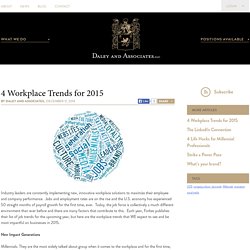 Jobs and employment rates are on the rise and the U.S. economy has experienced 50 straight months of payroll growth for the first time, ever. Clocking off: Japan calls time on long-hours work culture. The regulation eight hours in the office is over. 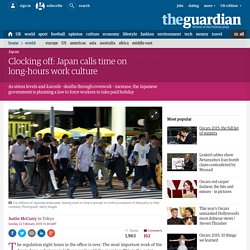 The most important work of the day is done; whatever is left can wait until the morning. This is the point many workers would think about heading for the door. Yet for millions of Japanese employees, the thought of clearing away their desks and being at home in time for dinner is enough to invite accusations of disloyalty. But after decades of giving companies carte blanche to milk every last drop of productivity from their workforce, a challenge to Japan’s ingrained culture of overwork has come from the government, which is considering making it a legal requirement for workers to take at least five days’ paid holiday a year.

Japanese employees are currently entitled to an average 18.5 days’ paid holiday a year – only two fewer than the global average – with a minimum of 10 days as well as 15 one-day national holidays. Strong dollar facing more competition as yuan rises. While so much attention has been focused on the strengthening of the U.S. dollar, China's renminbi has quietly broken into the top five most used global payment currencies. 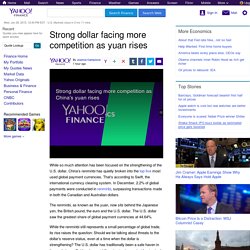 That’s according to Swift, the international currency clearing system. In December, 2.2% of global payments were conducted in renminbi, surpassing transactions made in both the Canadian and Australian dollars. The renminbi, as known as the yuan, now sits behind the Japanese yen, the British pound, the euro and the U.S. dollar.