6 Hot Digital Trends Transforming the Fashion Industry. Fashion was very slow to adapt to our new hyper-connected reality, but has in a very short time managed not only to catch up but also innovate in the ways tech can be used to give an time-tested but fast-paced industry a lift. 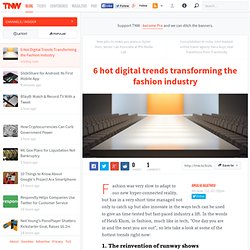 In the words of Heidi Klum, in fashion, much like in tech, “One day you are in and the next you are out”, so lets take a look at some of the hottest trends right now: 1. The reinvention of runway shows Fashion shows were always at the heart of fashion and part of why fashion was so reluctant to give in to social media, as the high level of competitiveness between designers and maybe a touch of diva attitude demanded top secrecy surrounding the shows.

Backstage: Now designers welcome the “intrusion” backstage and are the first to tweet out first looks. The show: The direction of shows has also changed and adopted a more cinematic approach. 2. There’s been a lot of talk – and action – around crowdsourcing and curation. 3. 4. 5. Who does it best? 6. Lean how Nike has changed it Marketing Strategy for the better. Nike is the world’s largest sports company, 30% bigger than nearest rivals Adidas. 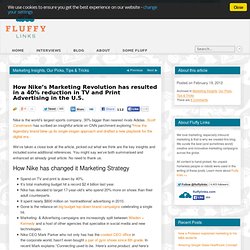 Scott Cendrowski has scribed an insightful article on CNN parchment exploring “How the legendary brand blew up its single-slogan approach and drafted a new playbook for the digital era. We’ve taken a close look at the article, picked out what we think are the key insights and included some additional references. You might say we’ve both summarised and enhanced an already great article. No need to thank us. How Nike has changed it Marketing Strategy Nike’s New Digital Marketing Focus For the first time in its history, Nike isn’t wholly reliant on a handful of superstars to move merchandise.After perfecting the art of big branding, it’s moving on to a world in which its consumers want to be told less and just do more.Nike Digital Sport, is a new division the company launched in 2010.It’s hired scores of new engineers to make technology for digital communities. New Design Focus Thanks to Steve Jobs.

How jeans conquered the world. 28 February 2012Last updated at 09:39 GMT By Stephanie Hegarty BBC World Service It's difficult to find a garment as widely embraced, worn and loved the world over as jeans. 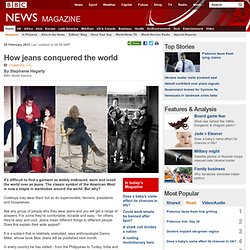 The classic symbol of the American West is now a staple in wardrobes around the world. But why? Cowboys may wear them but so do supermodels, farmers, presidents and housewives. Ask any group of people why they wear jeans and you will get a range of answers. It is a subject that is relatively unstudied, says anthropologist Danny Miller, whose book Blue Jeans will be published next month. The Sartorialist − BoF – The Business of Fashion. PARIS, France — With high-profile campaigns for Burberry and DKNY Jeans, a best-selling book, and a place on TIME magazine’s 2007 list of Top 100 Design Influencers, Scott Schuman is the streetstyle blogger that paved the way for hundreds of others who have followed in his trailblazing footsteps. 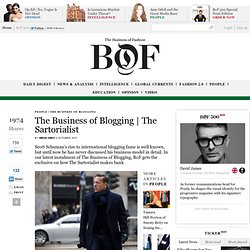 For the fashion flock, being shot for The Sartorialist website is still the ultimate badge of honour. But Mr. Schuman’s influence is felt far beyond the blogosphere. Inside FMM » Wednesday Wisdom: Digital Shifts in the Fashion World. The Seven Books Bloggers Should Read in order to set successful career goals, become more business savvy women or get an agent. - FMM Who Shops Couture? 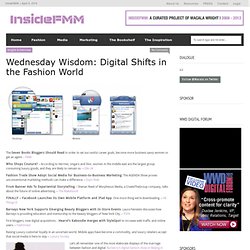 – According to Hermes, Ungaro and Dior, women in the middle east are the largest group consuming luxury goods, and they are likely to remain so. – Elle UK Fashion Trade Show Adopt Social Media for Business-to-Business Marketing: The AGENDA Show proves unconventional marketing methods can make a difference. – Expo Web From Banner Ads To Experiential Storytelling – Shenan Reed of Morpheous Media, a CreateTheGroup company, talks about the future of online advertising. – The MakeGood FINALLY – Facebook Launches Its Own Mobile Platform and iPad App. The Sartorialtwist. Fashion Tumblr Blogs to Follow. The history of Luxury in 5 minutes - Emmanuel Vivier Lifestream : Buzz, Digital, Viral & social media marketing expert.