PicoZed SDR SOM. Blog - PICing up 433MHz Signals for OSS Home Automation - Part 5. Progress has been slow with being back in the office, or on site in Scotland depending on the day. 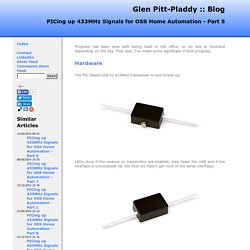 That said, I've made some significant if slow progress. Hardware The PIC based USB to 433MHz transceiver is now boxed up: LEDs show if the receiver or transmitter are enabled, data down the USB and if the interface is uninitialized (ie. the host OS hasn't got hold of the serial interface): I built antennae as per the Elector document on 433MHz Antennae which seem to do a good job - I get all devices clearly where I didn't without these antennae. Host Software The host server software is starting to look like more than the rough hack it started life as. Plug-in Metadata It quickly became obvious that I needed to provide configuration information for auto-configuration within each plug-in. Hook Scripts It's now got hook scripts that are executed on any data received from a sensor device with an environment reflecting the data received.

Network Service Bugs. How to make a Air Cooled 433MHz antenna. Blog - PICing up 433MHz Signals for OSS Home Automation - Part 1. With working out common 433MHz protocols for cheap home automation devices, I've turned to working out a way to interface with these devices. 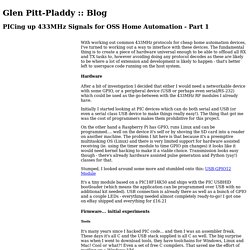 The fundamental thing is to create a piece of hardware universal enough to be able to offload all RX and TX tasks to, however avoiding doing any protocol decodes as these are likely to be where a lot of extension and development is likely to happen - that's better left to userspace code running on the host system. Hardware After a bit of investigation I decided that either I would need a networkable device with some GPIO, or a peripheral device (USB or perhaps even serial/RS-232) which could be used as the go-between with the 433MHz RF modules I already have. Initially I started looking at PIC devices which can do both serial and USB (or even a serial class USB device to make things really easy!). The thing that got me was the cost of programmers makes them prohibitive for this project. Firmware... initial experiments Tools Code Making it work. RTL-SDR Projects: EFERGY E2 CLASSIC FSK TRANSMISSION DECODING USING A RTL-SDR DONGLE AND RASPBERRY PI. 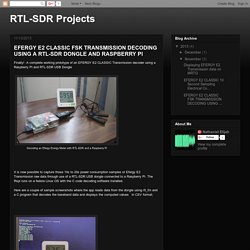 A complete working prototype of an EFERGY E2 CLASSIC Transmission decoder using a Raspberry Pi and RTL-SDR USB Dongle It is now possible to capture those 10s to 20s power consumption samples or Efergy E2 Transmission raw data through use of a RTL-SDR USB dongle connected to a Raspberry Pi. The Rspi runs on a fedora Linux OS with the C code decoding software installed. Here are a couple of sample screenshots where the app reads data from the dongle using rtl_fm and a C program that decodes the baseband data and displays the computed values in CSV format; Output data is printed in CSV format and can be captured and saved for excel use such as this one ; The source code can be downloaded here, A more detailed writeup of the software decoding can be viewed at Gough's Tech Zone. 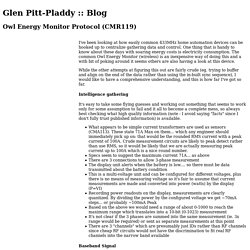 One thing that is handy to know about these days with soaring energy costs is electricity consumption. The common Owl Energy Monitor (wireless) is an inexpensive way of doing this and a with bit of poking around it seems others are also having a look at this device. While the other attempts at figuring this out are fairly crude (eg. trying to buffer and align on the end of the data rather than using the in-built sync sequence), I would like to have a comprehensive understanding, and this is how far I've got so far. Intelligence gathering It's easy to take some flying guesses and working out something that seems to work only for some assumption to fail and it all to become a complete mess, so always best checking what high quality information (note - I avoid saying "facts" since I don't fully trust published information) is available.