Text-to-Speech: Lifelike Speech Synthesis   LUIS (Language Understanding) - Cognitive Services - Microsoft. Principles of bot design - Inside Intercom. Despite plenty of excitement it’s still unclear how conversational UIs can be made to work in a practical sense. 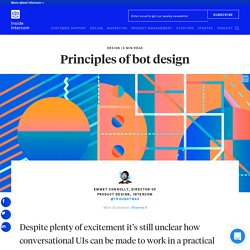 But opinionated design principles can help us push past the hype, and design something real people will want to use every day. We’re not lacking for self-assured sermons on how conversational UIs are the future. Much less is written about the practicalities of actually designing chatbot interactions. Yet it seems like this is precisely what we now need. Early attempts at chatbots have fallen flat in their execution, mostly because they have relied too much on natural language processing or A.I. capabilities that simply don’t yet exist.

In all the excitement of diving into this new technology most of us seem to have forgotten about the most important actor in this enterprise: the human being who is expected to talk to the bot. So how do we go about designing bots? Situations like these call for strong opinions, weakly held. What are design principles? Direct Line 3.0 REST API. The Direct Line API is a simple REST API for connecting directly to a single bot. 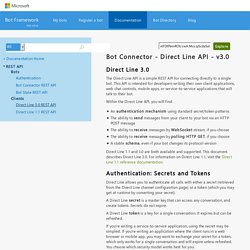 This API is intended for developers writing their own client applications, web chat controls, mobile apps, or service-to-service applications that will talk to their bot. Within the Direct Line API, you will find: An authentication mechanism using standard secret/token patternsThe ability to send messages from your client to your bot via an HTTP POST messageThe ability to receive messages by WebSocket stream, if you chooseThe ability to receive messages by polling HTTP GET, if you chooseA stable schema, even if your bot changes its protocol version Direct Line 1.1 and 3.0 are both available and supported. 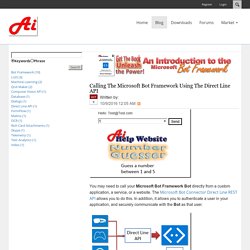 The Chatbot Dilemma. There’s a lot of discussion going on on the web about whether chatbots are really the next big thing or just a short-term fad. 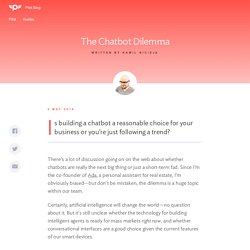 Since I’m the co-founder of Ada, a personal assistant for real estate, I’m obviously biased—but don’t be mistaken, the dilemma is a huge topic within our team. Certainly, artificial intelligence will change the world—no question about it. But it’s still unclear whether the technology for building intelligent agents is ready for mass markets right now, and whether conversational interfaces are a good choice given the current features of our smart devices. Chatbots are cheap at first. Last month, I wrote that developing a chatbot is a fairly cost-effective approach to building a prototype using the Wizard of Oz technique. I stand by what I said. They quickly start getting expensive, though. As you go down the road, the technology will start costing you a lot more than it did when you employed human operators. Why do chatbots suck? Faisal Khalid Contributor Faisal Khalid is the founder and CEO of Eva, a chatbot for consumer mortgages. 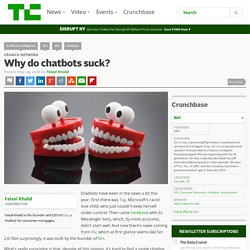 Chatbots have been in the news a lot this year. First there was Tay, Microsoft’s racist love child, who just couldn’t keep herself under control. Then came Facebook with its Messenger bots, which, by most accounts, didn’t start well. And now there’s news coming from Viv, which at first glance seems like Siri 2.0. What’s really surprising is that, despite all this hoopla, it’s hard to find a single chatbot that’s actually a really good product. So back to the question — why do chatbots suck? Chatbots that try to do too much usually fail Viv and Siri both suffer from this; they aim to cover everything, and in the process compromise on quality. Chatbots basically have two parts to them: the “brain” and the “body.”