Why Philosophy?: The Voice of Sustainment: Design Philosophy Papers: Vol 1, No 2. Made Thought. TO THINK is a journal exploring thoughts and conversations on visual culture. 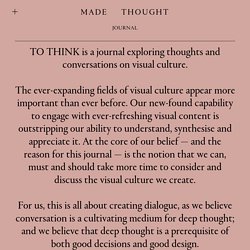 The ever-expanding fields of visual culture appear more important than ever before. Our new-found capability to engage with ever-refreshing visual content is outstripping our ability to understand, synthesise and appreciate it. To Think - Boutique Mags. BoutiqueMags.com supply some of the finest retail environments around the world. 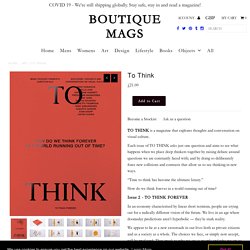 We supply a wide range of global stockists Including: art galleries, book stores, concept stores, clothing retailers, design studios, concierge services, museums, tailors, hotels and many more. We offer generous discounts and flexible terms.We offer exclusive products direct from the publishers that are only available through BoutiqueMags.comWe promote your outlets and drive customers to your stores, both directly from ourselves and through our publishers.We use both paid and organic social media campaigns.

We work with both publishers and retailers to help gain maximum exposure for titles and stores.We aim to work together to mutually generate trade between all of our trading partners. Please contact info@boutiquemags.com if you would like to work with us. Where Millennials end and Generation Z begins. For decades, Pew Research Center has been committed to measuring public attitudes on key issues and documenting differences in those attitudes across demographic groups. 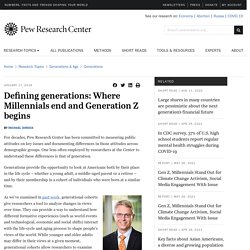 One lens often employed by researchers at the Center to understand these differences is that of generation. Acorn User guide. Think Tank » SustainAbility. Five Things We Learned About Think Tank Events. Open Future - Can think-tanks survive a post-fact world? A HUNDRED years ago this week, diplomats and academics from the British and American delegations at the Versailles peace conference at the end of the first world war met for a dinner at the Hotel Majestic in Paris, a short stroll from the Arc de Triomphe. 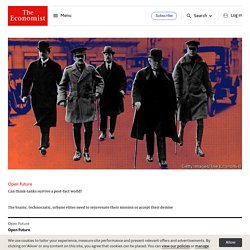 Their aim was to work out how to continue their fruitful co-operation beyond the peace talks and promote internationalist values in their countries. Their initial idea for a single Anglo-American institute to fuse a weakened Britain and an ascendant America was not realised. But the dinner on May 30th 1919 gave rise to two institutions that have shaped public outlook and public policy on foreign affairs ever since: the Royal Institute for International Affairs (known as Chatham House, after the building in which it resides), set up in London in 1920, and the Council on Foreign Relations, founded the following year in New York. 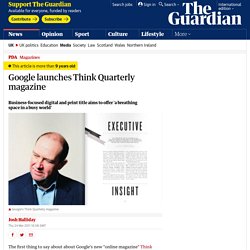 It's a marketing booklet sent to about 1,500 of its partners in the UK. The quarterly magazine is designed by creative agency The Church of London. It features no advertising and is free to view. Conservative Environment Network. Just what is a think tank? With the Peter Hain funding row, think tanks are in the news. 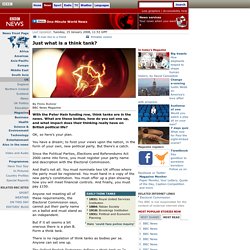 What are these bodies, how do you set one up, and what impact does their thinking really have on British political life? OK, so here's your plan. You have a dream; to foist your views upon the nation, in the form of your own, new political party. But there's a catch. Since the Political Parties, Elections and Referendums Act 2000 came into force, you must register your party name and description with the Electoral Commission. Androcentrism. Biocentrism in Environmental Ethics. How Humans Heal Climate.

As we look back at Earth's story, we learn that its climate has been vastly different throughout its history. 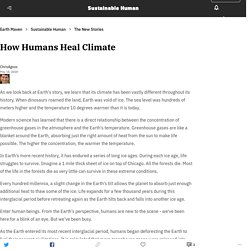 When dinosaurs roamed the land, Earth was void of ice. The sea level was hundreds of meters higher and the temperature 10 degrees warmer than it is today. Modern science has learned that there is a direct relationship between the concentration of greenhouse gases in the atmosphere and the Earth's temperature. Greenhouse gases are like a blanket around the Earth, absorbing just the right amount of heat from the sun to make life possible. The higher the concentration, the warmer the temperature. In Earth's more recent history, it has endured a series of long ice ages. Every hundred millennia, a slight change in the Earth's tilt allows the planet to absorb just enough additional heat to thaw some of the ice. Enter human beings. As the Earth entered its most recent interglacial period, humans began deforesting the Earth to fuel their nascent civilizations. Ethics - Animal ethics: The ethics of speciesism.

Moodle. 0:12Skip to 0 minutes and 12 secondsEvery year, a ballet of sorts plays out in the Southern Ocean. 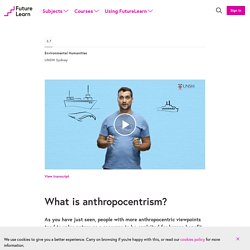 A Japanese whaling fleet scours the ocean, hunting whales under the guise of a scientific research programme. In opposition to this activity, the activist environmental organisation Sea Shepherd sends out a number of its own boats from ports in Australia, with the specific intent of protecting the whales by interrupting the Japanese operation. For this campaign, Sea Shepherd has widespread support in Australia and other parts of the world.

Politics and ethics of this Southern Ocean clash over whales aside, this scenario provides some insights into values and perceptions of society and how they shape environmental outcomes. What is enlightened anthropocentrism in philosophy? Anthropocentrism refers to a philosophical world view where human beings are seen as superior to other living and non-living things. 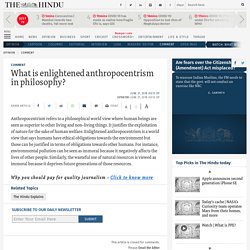 It justifies the exploitation of nature for the sake of human welfare. Enlightened anthropocentrism is a world view that says humans have ethical obligations towards the environment but those can be justified in terms of obligations towards other humans. For instance, environmental pollution can be seen as immoral because it negatively affects the lives of other people. Similarly, the wasteful use of natural resources is viewed as immoral because it deprives future generations of those resources. You have reached your limit for free articles this month. Register to The Hindu for free and get unlimited access for 30 days. Sign up for a 30-day free trial. Subscription Benefits Include Today's Paper. Error - Cookies Turned Off. 1 Introduction These days, most ethicists agree that at least some nonhumans have interests that are of direct moral importance.1 That is to say, there are at least some nonhuman interests that make a moral claim on us. 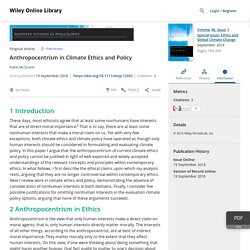 Yet with very few exceptions, both climate ethics and climate policy have operated as though only human interests should be considered in formulating and evaluating climate policy. In this paper I argue that the anthropocentrism of current climate ethics and policy cannot be justified in light of well‐explored and widely accepted understandings of the relevant concepts and principles within contemporary ethics. In what follows, I first describe the ethical claims upon which my analysis rests, arguing that they are no longer controversial within contemporary ethics. Next I review work in climate ethics and policy, demonstrating the absence of consideration of nonhuman interests in both domains. Moodle. Holocene Epoch. The Holocene is a geological epoch which began at the end of the Pleistocene (at 11,700 calendar years BP) and continues to the present.

The Holocene is part of the Quaternary period. Its name comes from the Greek words ὅλος (holos, whole or entire) and καινός (kainos, new), meaning “entirely recent”. It has been identified with the current warm period, known as MIS 1 and based on that past evidence, can be considered an interglacial in the current ice age. The Holocene also encompasses within it the growth and impacts of the human species world-wide, including all its written history and overall significant transition toward urban living in the present. Human impacts of the modern era on the Earth and its ecosystems may be considered of global significance for future evolution of living species, including approximately synchronous lithospheric evidence, or more recently atmospheric evidence of human impacts.

The Anthropocene epoch: scientists declare dawn of human-influenced age. Humanity’s impact on the Earth is now so profound that a new geological epoch – the Anthropocene – needs to be declared, according to an official expert group who presented the recommendation to the International Geological Congress in Cape Town on Monday. The new epoch should begin about 1950, the experts said, and was likely to be defined by the radioactive elements dispersed across the planet by nuclear bomb tests, although an array of other signals, including plastic pollution, soot from power stations, concrete, and even the bones left by the global proliferation of the domestic chicken were now under consideration.

The current epoch, the Holocene, is the 12,000 years of stable climate since the last ice age during which all human civilisation developed. Ethical Anthropocentrism: Making Environmentalism Relatable. Joseph Winters, College '20According to British ethicist Alisdair Cochrane in his entry for the Internet Encyclopedia of Philosophy, “environmental ethics concerns human beings’ ethical relationship with the natural environment.”

“To a certain extent they’re claiming it as a way of frightening people into action, when in fact, if it’s actually true we’re in a sixth mass extinction, then there’s no point in conservation biology.” The Extinction Crisis. Sixth Great Extinction: We're to Blame. The Anthropocene: Age of Genocide. We’re providing you with a blockchain wallet – and a free amount of 100 credits (appr. 10 EURO). Inside track. Top 75 Sustainability Blogs, Websites & Influencers in 2020. 1. Sustainability Matters - industry news, comment, feature articles, case studies and new products. How Humans Heal Climate. Smartfiber AG: SeaCell<sup>TM</sup> 4 Reasons our Current Business Model is Unsustainable. Sooner or later, there is a tough message that sustainability champions need to deliver to harried business leaders—the business game they are playing can’t continue.

It’s been fun, but if they keep playing the game the way they are, everyone will lose. Explore Muge’s unique approach to large format photography based on ancient Chinese philosophy. The latest issue of Fukt is all about systems, and how to break them. Don't pursue economic growth at expense of environment - report. Pursuing economic growth at the expense of the environment is no longer an option as Europe faces “unprecedented” challenges from climate chaos, pollution, biodiversity loss and the overconsumption of natural resources, according to a report from Europe’s environmental watchdog. Europe was reaching the limits of what could be achieved by gradual means, by making efficiencies and small cuts to greenhouse gas emissions, with “transformational” change now necessary to stave off the impacts of global heating and environmental collapse, warned Hans Bruyninckx, executive director of the European Environment Agency.

Speciesism. Human society under urgent threat from loss of Earth's natural life. Human society is in jeopardy from the accelerating decline of the Earth’s natural life-support systems, the world’s leading scientists have warned, as they announced the results of the most thorough planetary health check ever undertaken. From coral reefs flickering out beneath the oceans to rainforests desiccating into savannahs, nature is being destroyed at a rate tens to hundreds of times higher than the average over the past 10m years, according to the UN global assessment report. Causes, Effects, & Facts. The Holocene is unique among geologic epochs because varied means of correlating deposits and establishing chronologies are available. Geochronology. The Anthropocene epoch: scientists declare dawn of human-influenced age. Digital Publishing Platform for Magazines, Catalogs, and more. Bloomsbury Design Library - Sustainment, The.