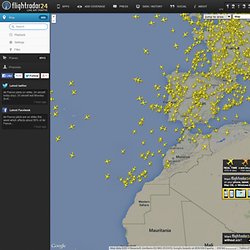 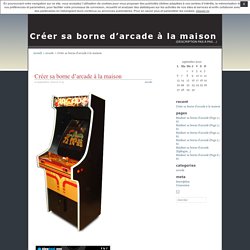 Consultez désormais le contenu de ce blog sur le site Internet: (Attention la page « Description complète » met quelques secondes à s’afficher en raison du très grand nombre de photos. Raspberry Pi. Tutorial 01 for Arduino: Getting Acquainted with Arduino. Make Your Own. Search for any address or city Or select a point by clicking on the map Adjust how zoomed in or out your radial is Step 1: Choose Your Place Add places by searching, or clicking on the map. search Hrm, we weren't able to find your search. 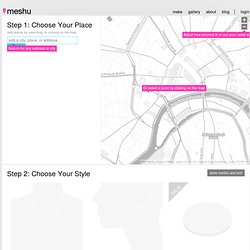 Most Popular How-To Guides of 2013. Explainshell.com - match command-line arguments to their help text. Coffee Table Pi. The LCD screen I went with a 24inch LCD screen with LED backlight. Select any size screen you wish. Make sure it has good viewing angles as the screen will be mounted upwards and almost always viewed at an angle. Test out the screen viewed from above and below, from the left and right and make sure it still looks almost as good as when viewed straight on.

Select one that can be wall mounted as it can then be attached to the table from underneath. Select one that turns on without needing any buttons to be pressed as all the buttons with be hidden inside the table. The Joystick and Button This is up to you, I went with a Happ 4 or 8 way arcade ball top joystick, 2 blue American style buttons, 1 player and 2 player buttons. Perspex sheet 4mm Cut to the size of the outside edge of the LCD screen, larger than the viewing size of the screen as it will be screwed onto the underside of the top of the table.

Wood, glue, screws, stain and finish This is all up to what you want to do. Weekend Hacker: Make An Arcade Cabinet [Raspberry Pi] The Only Raspberry Pi XBMC Tutorial You Will Ever Need. In this updated guide, you will learn how to set up Raspberry Pi 3 as a complete Kodi (was XBMC) entertainment center solution with the right accessories. Over the past couple of years, I have had mixed feelings about Raspberry Pi as a Kodi based front-end device, because even after using all possible optimization tricks it simply was not responsive enough for my requirements. Fortunately, with the latest Raspberry Pi 3 this is not the case anymore. Raspberry Pi Project Ideas: How I Built Call Mom Button. Coming back from PyCon 2013, I was looking for interesting Raspberry Pi project ideas that would attract the attention of both non-programming students and those with more experience.

I was averaging one Raspberry Python class each month at my hackerspace, MakerBar. I decided that the project should relate to Mother’s day and have something my students could take home or perhaps even give to their Mom as a nifty gift. Foolproof guide to Installing XBMC on the Raspberry Pi. From unboxing to full functionality. Turn a Raspberry Pi Into an XBMC Media Center in Under 30 Minutes. Janhouse/tespeed. How to Test Your Internet Speed with a Terminal Command. OpenEnergyMonitor. Using the Raspberry Pi as CUPS Print Server for Windows and Apple Mac (AirPrint) » pi3g Blog. Prerequisites ALL of the following commands will be run as root. 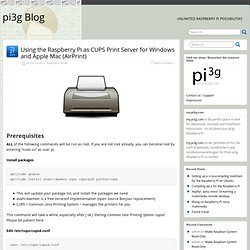 If you are not root already, you can become root by entering “sudo su” as user pi. Install packages aptitude update aptitude install avahi-daemon cups cups-pdf python-cups This will update your package list, and install the packages we needavahi-daemon is a free zeroconf implementation (open source Bonjour replacement)CUPS = Common Unix Printing System – manages the printers for you This command will take a while, especially after [ ok ] Starting Common Unix Printing System: cupsd. Edit /etc/cups/cupsd.conf nano /etc/cups/cupsd.conf Comment out the line just below “# Only listen for connections from the local machine.” with an #, and add some new lines, like this: # Only listen for connections from the local machine.

Leave the other lines as they are. Restart the CUPS service This will restart the CUPS service and reload it’s configuration files Add the user pi to the lpadmin group. How To Anonymize and Encrypt Your BitTorrent Traffic. Whether you’re trying to dodge an angry government, a connection throttling ISP, or the watchful gaze of media conglomerates, anonymizing and encrypting your BitTorrent traffic can help. 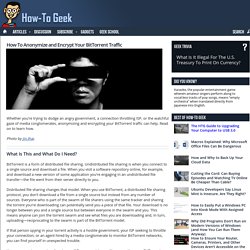