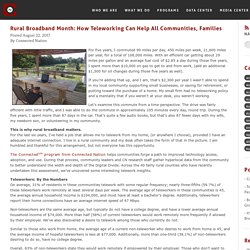 With an efficient car getting about 29 miles per gallon and an average fuel cost of $2.85 a day during those five years, I spent more than $10,000 on gas to get to and from work, (add an additional $1,500 for oil changes during those five years as well). State of the Internet Connectivity Visualization. Internet - Our World In Data. Measures of Human Mobility Using Mobile Phone Records Enhanced with GIS Data.

Abstract In the past decade, large scale mobile phone data have become available for the study of human movement patterns. 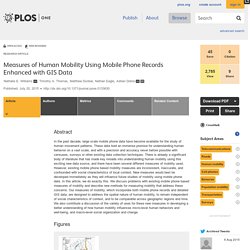 These data hold an immense promise for understanding human behavior on a vast scale, and with a precision and accuracy never before possible with censuses, surveys or other existing data collection techniques. There is already a significant body of literature that has made key inroads into understanding human mobility using this exciting new data source, and there have been several different measures of mobility used. However, existing mobile phone based mobility measures are inconsistent, inaccurate, and confounded with social characteristics of local context.

New measures would best be developed immediately as they will influence future studies of mobility using mobile phone data. White Papers. White Papers. How the Center for Public Integrity measured Internet inequality. To conduct its analysis, the Center for Public Integrity combined these data sets: The Federal Communication Commission’s Form 477 Broadband Deployment Data, as of June 30, 2015, the latest available; 2010 U.S. 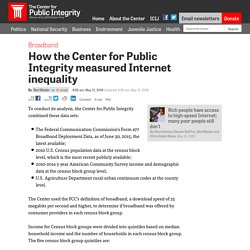 Census population data at the census block level, which is the most recent publicly available; 2010-2014 5-year American Community Survey income and demographic data at the census block group level; U.S. Agriculture Department rural-urban continuum codes at the county level. The Center used the FCC’s definition of broadband, a download speed of 25 megabits per second and higher, to determine if broadband was offered by consumer providers in each census block group. 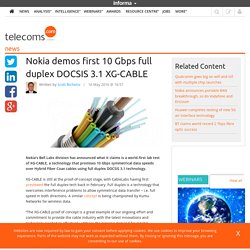 XG-CABLE is still at the proof-of-concept stage, with CableLabs having first previewed the full duplex tech back in February. Full duplex is a technology that overcomes interference problems to allow symmetrical data transfer – i.e. full speed in both directions. U.S. Cellular: CDMA carriers face a VoLTE 'gap' While some U.S. carriers are moving ambitiously to deploy VoLTE -- T-Mobile is the obvious example here -- U.S. 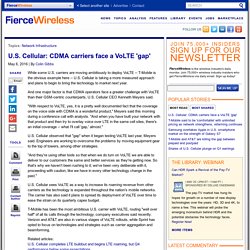 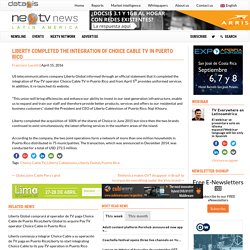 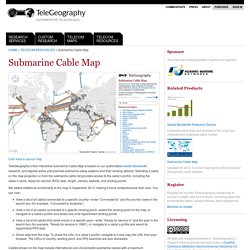 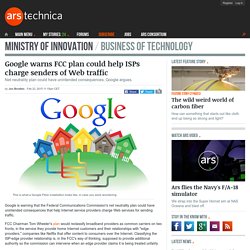 FCC Chairman Tom Wheeler's plan would reclassify broadband providers as common carriers on two fronts, in the service they provide home Internet customers and their relationships with "edge providers," companies like Netflix that offer content to consumers over the Internet. Verizon Wireless admits to hoarding spectrum, ends any argument about a spectrum crunch. FoxTV10 Recently, the Federal Communications Commission (FCC) received a record-breaking $44.9 billion worth of bids in the spectrum auction of AWS-3 airwaves. As I noted at the time, this was proof itself of the absurdity in wireless carriers claiming that Title II rules would deter industry investment. But the auction also proved that wireless carriers, such as Verizon, should stop crying about a “disastrous spectrum crunch” coming if regulators don’t do precisely what the major carriers want. It wasn’t even three years ago that Verizon told the FCC that they were running out of spectrum. Verizon was telling the FCC this because they were pushing the FCC to approve a spectrum and marketing deal with the cable industry. New York Times The New York Times reporting on the wireless carriers spectrum warnings in 2012. The World’s Email Encryption Software Relies on One Guy, Who is Going Broke. Update, Feb. 5, 2015, 8:10 p.m.: After this article appeared, Werner Koch informed us that last week he was awarded a one-time grant of $60,000 from Linux Foundation's Core Infrastructure Initiative. 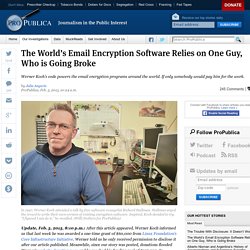 Werner told us he only received permission to disclose it after our article published. NYU Wireless pushes for FCC to act fast on releasing mmW spectrum. With a Feb. 17 reply comment deadline coming up on the FCC's Notice of Inquiry (NOI) on the use of spectrum above 24 GHz, researchers at New York University (NYU)-Wireless are once again sounding the horn that the FCC has the power to put the U.S. in the driver's seat when it comes to the race to 5G. Faster 5G being developed in Arlington Heights for our next-gen devices.

TIC. Portal:Telecommunication. From Wikipedia, the free encyclopedia Electrical engineering is a professional engineering discipline that deals with the study and application of electricity, electronics and electromagnetism. The field first became an identifiable occupation in the late nineteenth century with the commercialization of the electric telegraph and electrical power supply. The field now covers a range of sub-disciplines including those that deal with power, optoelectronics, digital electronics, analog electronics, computer science, artificial intelligence, control systems, electronics, signal processing and telecommunications.

The term electrical engineering may or may not encompass electronic engineering. ...that Intelsat 1, known as Early Bird, launched in 1965, provided either 240 voice circuits or one two-way television channel between the United States and Europe. MAP: This Is What What Internet Looks Like. 1901EasternTelegraph.jpg (JPEG Image, 1200 × 971 pixels) - Scaled (85%) Understanding Wireless Communications in Public Safety.