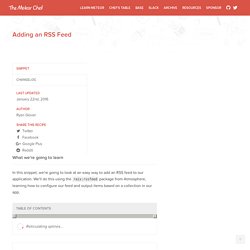 We'll do this using the raix:rssfeed package from Atmosphere, learning how to configure our feed and output items based on a collection in our app. Whether you’re building a blog or an app that has a stream of content that users can subscribe to, adding an RSS feed can be a great way to add a nice touch of engagement to your app. Though it doesn’t come up in every app, when you do need one, it’s nice to know that it’s both possible and easy! Angular 2 by example – Building a RSS Reader with Angular 2 – Part 1. As one of the previous posts on Angular Craft, about how we can use Angular 2 and Typescript to build a simple Rock, Paper, Scissors game has received a lot of attention and questions, I have decided to create a new sample app. 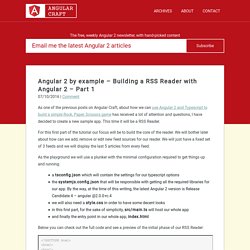 This time it will be a RSS Reader. For this first part of the tutorial our focus will be to build the core of the reader. We will bother later about how can we add, remove or edit new feed sources for our reader. We will just have a fixed set of 3 feeds and we will display the last 5 articles from every feed. As the playground we will use a plunker with the minimal configuration required to get things up and running: a tsconfig.json which will contain the settings for our typescript optionsthe systemjs.config.json that will be responsible with getting all the required libraries for our app. Below you can check out the full code and see a preview of the initial phase of our RSS Reader: Our app is made of 2 main components types. Cacomania: Build a feed reader with the Google feed API and AngularJS. Originally I wrote a feed reader using AngularJS with a back end based on the Slim Framework and the SimplePie feed parser, but during writing the app it became more and more complex since I exceeded the point where an app fits into one or two tutorials. 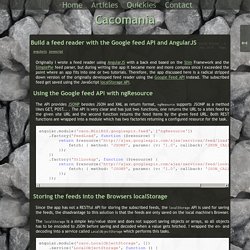 Therefore, the app discussed here is a radical stripped down version of the originally developed feed reader using the Google Feed API instead. The subscribed feed get saved using the JavaScript localStorage API. Using the Google feed API with ngResource The API provides JSONP besides JSON and XML as return format, ngResource supports JSONP as a method likes GET, POST... .

Cacomania: Build a feed reader with the Google feed API and AngularJS. How to Create a News Reader With React Native: Setup and News Item Component - Envato Tuts+ Code Tutorial. Ionic 2 First Drive: Making an RSS Reader. A few weeks ago I wrote about my experience looking into Angular 2 (Time for Angular 2?). 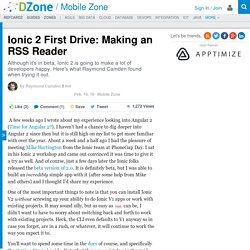 I haven’t had a chance to dig deeper into Angular 2 since then but it is still high on my list to get more familiar with over the year. About a week and a half ago I had the pleasure of meeting Mike Hartington from the Ionic team at PhoneGap Day. I sat in his Ionic 2 workshop and came out convinced it was time to give it a try as well. And of course, just a few days later the Ionic folks released the beta version of 2.0. It is definitely beta, but I was able to build an incredibly simple app with it (after some help from Mike and others) and I thought I’d share my experience. One of the most important things to note is that you can install Ionic V2 without screwing up your ability to do Ionic V1 apps or work with existing projects.

You’ll want to spend some time in the docs of course, and specifically the Getting Started guide. You’ll also want to peruse the components docs. That’s damn spiffy. JSON Developer's Guide for the Google Feed API - Google Feed API. You can use the Google Feed JSON interface to write feed applications in any language that can handle a JSON-encoded result set with embedded status codes. 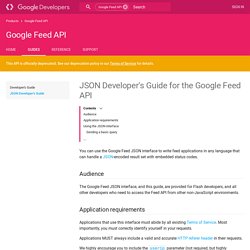 Audience The Google Feed JSON interface, and this guide, are provided for Flash developers, and all other developers who need to access the Feed API from other non-JavaScript environments. Application requirements Applications that use this interface must abide by all existing Terms of Service. Most importantly, you must correctly identify yourself in your requests. Applications MUST always include a valid and accurate HTTP referer header in their requests. We highly encourage you to include the userip parameter (not required, but highly encouraged). Using the JSON interface The easiest way to start learning about this interface is to try it out. This section describes how to send basic queries using both Find Feed and Load Feed.