Gremlin-orm/gremlin-orm: Gremlin ORM for Node.js. Building your bot's brain with Node.js and spaCy. This is a guest post by Wah Loon Keng, the author of spacy-nlp, a client that exposes spaCy's NLP text parsing to Node.js (and other languages) via Socket.IO. 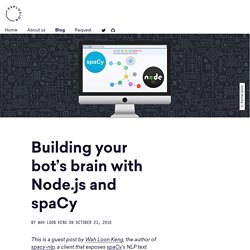 Natural Language Processing and other AI technologies promise to let us build applications that offer smarter, more context-aware user experiences. However, an application that's almost smart is often very, very dumb. In this tutorial, I'll show you how to set up a better brain for your applications — a Contextual Knowledge Base Graph.

Applications feel particularly stupid when they make mistakes that a human never would, but which a human can sort of understand. These mistakes reveal how crude the system's actual logic is, and the illusion that you're "talking" to something "intelligent" shatters. To avoid these mistakes, we'd like our application to have a way to remember what the user has told it. Building your bot's brain with Node.js and spaCy. C# - How to Create a Node with Neo4jClient in Neo4j v2? Creating a Neo4j Example Graph with the Arrows Tool. Posted by Michael Hunger on Mar 21, 2017 in cypher, import | 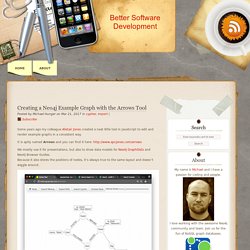 Creating a Neo4j Example Graph with the Arrows Tool. Cypher MERGE Explained. 31 Jul 2014by Luanne Misquitta With MERGE set to replace CREATE UNIQUE at some time, the behavior of MERGE can sometimes be tricky to understand. 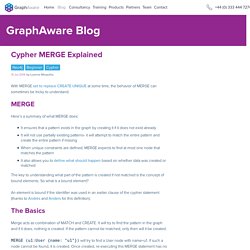 Here’s a summary of what MERGE does: It ensures that a pattern exists in the graph by creating it if it does not exist already It will not use partially existing patterns- it will attempt to match the entire pattern and create the entire pattern if missing When unique constraints are defined, MERGE expects to find at most one node that matches the pattern It also allows you to define what should happen based on whether data was created or matched The key to understanding what part of the pattern is created if not matched is the concept of bound elements. So what is a bound element? An element is bound if the identifier was used in an earlier clause of the cypher statement (thanks to Andrés and Anders for this definition). The Basics Merge acts as combination of MATCH and CREATE. Patterns with bound and unbound nodes warrant some examples.

Fullstack JavaScript – Neo4j Script Procedures. Posted by Michael Hunger on Apr 1, 2017 in cypher, neo4j | Imagine, being a fullstack JavaScript developer and not just using the language in the frontend, middleware or backend but also to create your user-defined procedures and functions in the database. 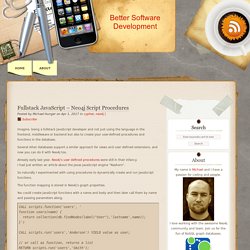 Graph Database Training for Every Level at the GraphAcademy. Graph Database with Neo4j and a .NET Client - The New Stack. Chris Skardon, Owner, Tournr Chris Skardon is the owner of Tournr and is a .NET developer in charge of maintaining the primary .NET client for Neo4j (a.k.a. the Neo4jClient). 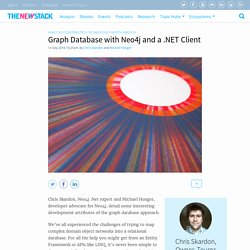 Chris Skardon, Neo4j .Net expert and Michael Hunger, developer advocate for Neo4j, detail some interesting development attributes of the graph database approach. We’ve all experienced the challenges of trying to map complex domain object networks into a relational database. For all the help you might get from an Entity Framework or APIs like LINQ, it’s never been simple to do — especially when queries get complex and entities get more connected. Graph Database with Neo4j and a .NET Client - The New Stack. Graph Visualization for Neo4j Schemas Using yFiles - DZone Database.

I have been working with graph visualizations for almost 20 years now, but only recently have I begun looking into graph databases. 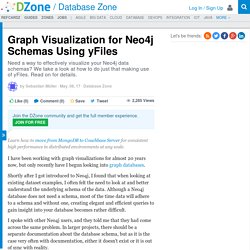 Shortly after I got introduced to Neo4j, I found that when looking at existing dataset examples, I often felt the need to look at and better understand the underlying schema of the data. Although a Neo4j database does not need a schema, most of the time data will adhere to a schema and without one, creating elegant and efficient queries to gain insight into your database becomes rather difficult. I spoke with other Neo4j users, and they told me that they had come across the same problem.

In larger projects, there should be a separate documentation about the database schema, but as it is the case very often with documentation, either it doesn’t exist or it is out of sync with reality. Getting the Schema. Graph Visualization for Neo4j Schemas Using yFiles - DZone Database. How to Design Retail Recommendation Engines with Neo4j. Introduction to Graph Databases using Neo4J and its .Net Client - CodeProject. GraphDbExamples - 13.2 KB Introduction. 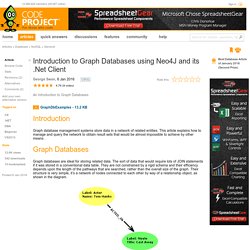 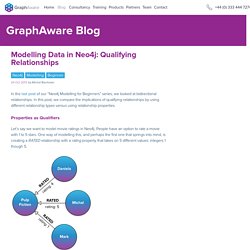 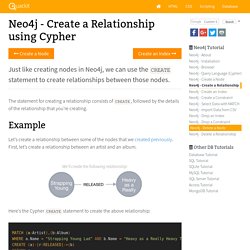 Neo4j 3.0 With a .Net Driver: Neo4jClient - DZone Database. I started dabbling in Neo4j, a NoSQL graph database, around 2 years ago. 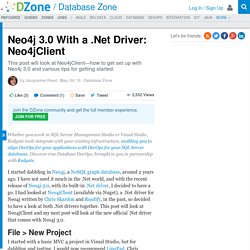 I have not used it much in the .Net world, and with the recent release of Neo4j 3.0, with its built-in .Net driver, I decided to have a go. I had looked at Neo4jClient (available via Nuget), a .Net driver for Neo4j written by Chris Skardon and Readify, in the past, so decided to have a look at both .Net drivers together. This post will look at Neo4jClient and my next post will look at the new official .Net driver that comes with Neo4j 3.0. File > New Project I started with a basic MVC 4 project in Visual Studio, but for dabbling and testing, I would now recommend LinqPad. Neo4j : des données et des graphes - 1. Prise en main (2e édition) - Sylvain Roussy, Nicolas Rouyer. Neo4j Batch Insertion from CSV. Neo4j et C# – Context is king… Généralités Neo4j est un moteur de base de données NoSql « Graph ».

There is one simple way to think about graph databases, said Emil Eifrem, CEO of Neo Technology and one of the original developers of the graph database technology. Sparsity-technologies: Sparksee high-performance graph database. The Emergence of the Enterprise DataFabric - Neo4j Graph Database. By Clark Richey, CTO of FactGem | June 1, 2017 Editor’s Note: This presentation was given by Mark Kvamme and Clark Richey at GraphConnect San Francisco in October 2016. Presentation Summary Enterprises are faced with a variety of challenges when it comes to managing data, largely due to the disparate storage of a data in aging infrastructure. This results in companies using huge amount of resources — personnel, time, hardware and money — bringing this data together in an attempt to glean insights. By creating a DataFabric using tools such as the Neo4j graph database, enterprises are able to transform into dynamic, scalable and modern enterprises.