The end of the galaxy as we know it? Our Milky Way galaxy is an anomaly in more ways than one. 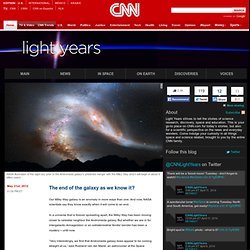 And now, NASA scientists say they know exactly when it will come to an end. In a universe that is forever spreading apart, the Milky Way has been moving closer to celestial neighbor the Andromeda galaxy. But whether we are in for intergalactic Armageddon or an extraterrestrial fender bender has been a mystery – until now. “Very interestingly, we find that Andromeda galaxy does appear to be coming straight at us,” said Roeland van der Marel, an astronomer at the Space Telescope Science Institute in Baltimore. He was scheduled to speak at a NASA press conference Thursday. 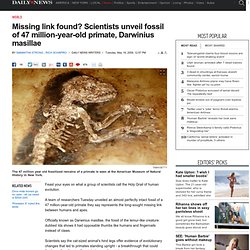 Feast your eyes on what a group of scientists call the Holy Grail of human evolution. A team of researchers Tuesday unveiled an almost perfectly intact fossil of a 47 million-year-old primate they say represents the long-sought missing link between humans and apes. Officially known as Darwinius masillae, the fossil of the lemur-like creature dubbed Ida shows it had opposable thumbs like humans and fingernails instead of claws. Scientists say the cat-sized animal's hind legs offer evidence of evolutionary changes that led to primates standing upright - a breakthrough that could finally confirm Charles Darwin's theory of evolution.

"This specimen is like finding the Lost Ark for archeologists," lead scientist Jorn Hurum said at a ceremony at the American Museum of Natural History. Pkz0F.jpg (JPEG Image, 1258 × 706 pixels)