Television Script Format. It's important to remember that there is no hard and fast standardization. 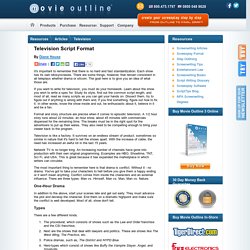 Each show has its own idiosyncrasies. There are some things, however, that remain consistent in all teleplays whether drama or sitcom. The goal here is to give you an idea of what those are. If you want to write for television, you must do your homework. Learn about the show you wish to write a spec for. Format and story structure are precise when it comes to episodic television. Television is like a factory.

Network TV is no longer king. The most important thing to remember here is that drama is conflict. One-Hour Drama In addition to the above, start your scenes late and get out early. Types There are a few different kinds. The procedural, which consists of shows such as the Law and Order franchise and the CSI franchise, Next are the shows that deal with lawyers and politics. Format One-hour shows are formatted like features, except for the act breaks. Typically, a one-hour drama consists of a teaser and 4 acts. A ton of useful information about screenwriting from screenwriter John August.

How to introduce a character. New Assistant Matt came into my office recently, a look of uneasy revelation in his eyes. 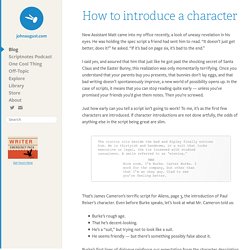 He was holding the spec script a friend had sent him to read. “It doesn’t just get better, does it?” He asked. “If it’s bad on page six, it’s bad to the end.” I said yes, and assured that him that just like he got past the shocking secret of Santa Claus and the Easter Bunny, this realization was only momentarily terrifying. Just how early can you tell a script isn’t going to work? The visitor sits beside the bed and Ripley finally notices him. Nice room. That’s James Cameron’s terrific script for Aliens, page 3, the introduction of Paul Reiser’s character. Burke’s rough age.That he’s decent-looking.He’s a “suit,” but trying not to look like a suit.He seems friendly — but there’s something possibly false about it. 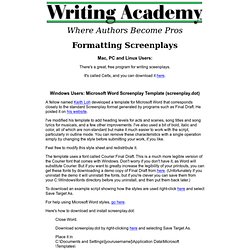 It's called Celtx, and you can download it here. Windows Users: Microsoft Word Screenplay Template (screenplay.dot) A fellow named Keith Loh developed a template for Microsoft Word that corresponds closely to the standard Screenplay format generated by programs such as Final Draft. He posted it on his website. I've modified his template to add heading levels for acts and scenes, song titles and song lyrics for musicals, and a few other improvements. Feel free to modify this style sheet and redistribute it. The template uses a font called Courier Final Draft. To download an example script showing how the styles are used right-click here and select Save Target As.