Inbox (390) - ashleyredshaw - Gmail. Vegan Pumpkin Pecan Scones with Maple Glaze - Cookie and Kate. Best Vegan Biscuit Recipe. Before you suggest there’s no way vegan biscuits can taste just as good if not BETTER than regular biscuits, everyone I’ve fed these to agree that these are in fact LEGIT, amazing, fluffy, buttery biscuits. 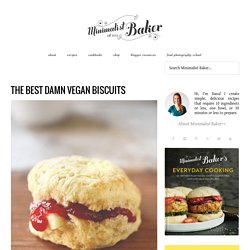 As in, serve them to your 80-year old grandmother who’s been making biscuits for centuries and she wouldn’t know the difference. As in, slap some gravy on it and you’d think you died and gone to heaven. As in, fluffy, buttery, savory, biscuit perfection. Homemade Marshmallow Crème Recipe Recipe. Decadent Chocolate Torte Recipe - Vegan in the Freezer. You need a Springform Pan that measures 9" to 10-1/4". 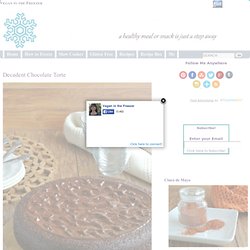 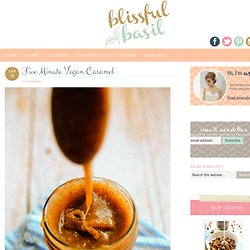 While working on a blueberry granola recipe this past Saturday, I noticed that the mixture of ingredients I planned to coat the granola in was wafting this amazingly sweet, rich, and buttery smell as it warmed on the stove. As soon as I caught its scent, I abandoned the oats and buckwheat I had been measuring out and rushed over to check on it. I tasted it, did a happy dance in our kitchen, and then ran down the hall to wake Dan up in hopes that he might confirm the same thoughts I had about this delightful mixture: it tasted exactly like caramel! He confirmed my caramel hopes and then requested another few tastes. Nothing like some sweet spoonfuls of caramel to start your Saturday morning off right. I still ended up using the mixture to coat the granola in, and it worked perfectly for its originally-intended purpose. Kelly Brozyna's Chocolate Pie + Raw Graham Cracker Crust. You know that I’m a chocoholic, right? 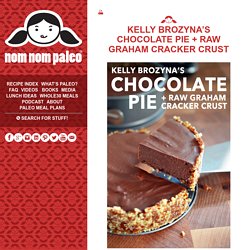 I don’t care if the Paleo Police kick down my door—I love dark chocolate. Just a tiny square of my favorite dark chocolate bar can usually satisfy my cravings for something sweet, which in turn keeps me from compulsively making “Paleofied” desserts on a regular basis. But on those occasions when I want a grain-free treat, it has to be ridiculously great. Homemade Coconut Milk (Using A Whole Fresh Coconut) I love coconut milk, but it either comes in tetra paks or in cans lined with plastic that most likely contains BPA. 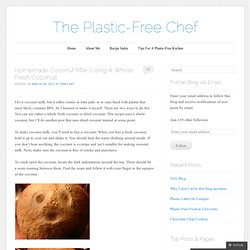 So I learned to make it myself. There are two ways to do this. You can use either a whole fresh coconut or dried coconut. This recipe uses a whole coconut, but I’ll do another post that uses dried coconut instead at some point. To make coconut milk, you’ll need to buy a coconut. To crack open the coconut, locate the dark indentations around the top. Next, place the coconut over a bowl and hit the seams with a rolling pin. After the juice has drained out, continue to hit the coconut until it breaks open. Next, wrap the coconut in a towel. Take the pieces inside. There will be another layer of skin that can be peeled off with a vegetable peeler. Repeat for the rest of the pieces. Chop the larger pieces into smaller one-inch chunks.

Put these pieces into a blender along with the reserved coconut juice and 2 cups of water. Blend for two to three minutes. Like this: Cinnamon and Coconut Pancakes. I know Paleo pancakes are totally candy cigarettes but once in a while, I feel like making a stack. 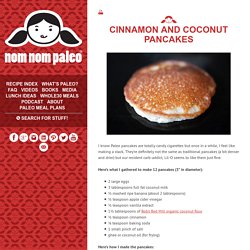 Instant Cinnamon "Oatmeal" (Low Carb and Grain Free) To find other great Low-Carb, Gluten-Free recipes, visit with us on Faceboook! 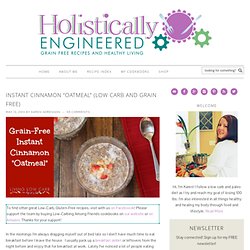 Please support the team by buying Low-Carbing Among Friends cookbooks on our website or on Amazon. Thanks for your support! In the mornings I’m always dragging myself out of bed late so I don’t have much time to eat breakfast before I leave the house. I usually pack up a breakfast skillet or leftovers from the night before and enjoy that for breakfast at work. Candy with a Crunch! Honeycomb Candy from the Seattlest Recipe Reviews. Previous image Next image Honeycomb candy! 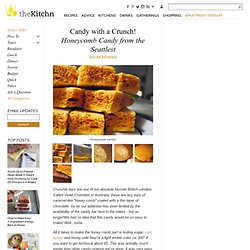 Crunchie bars are one of our absolute favorite British candies. Called Violet Crumbles in Australia, these are airy bars of caramel-like "honey comb" coated with a thin layer of chocolate. So far our addiction has been limited by the availability of the candy bar here in the states - but no longer! Search results - ashleyredshaw - Gmail. Bouchon Bakery's Nutter Butter Cookies. Photo Courtesy of Culinary Trends and Bouchon Photo One Perfect Bite From the kitchen of One Perfect Bite...I'm not given to hero worship and will never understand the commotion that surrounds some icons in the cooking world. 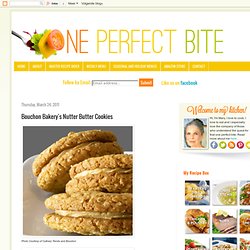 I have respect for the very best of them and an amused tolerance for the "wannabes". Pumpkin Pecan Scones with Maple Glaze. The Vegan Cookie Fairy: No-Bake Gianduja Chocolate Mousse Cake. Happy Birthday Mum! Joy's (New! Thick!) Coconut Caramel. I make this caramel a lot. 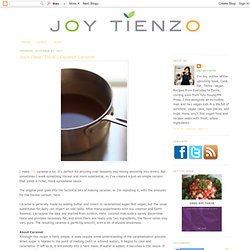 It's perfect for drizzling over desserts and mixing smoothly into drinks. But sometimes I want something thicker and more substantial, so I've created a just-as-simple version that yields a richer, more spreadable sauce. The original post goes into the technical bits of making caramel, so I'm reposting it, with the amounts for the thicker version, here. Caramel is generally made by adding butter and cream to caramelized sugar. Not vegan, but the usual substitutes for dairy can impart an odd taste. About CaramelAlthough this recipe is fairly simple, it does require some understanding of the caramelization process. Since crystallization is the enemy of a good caramel, preventing it is important. -Incorporate an acid into the sugar/water mixture (lemon juice, vinegar, cream of tartar); this keeps the sugar crystals from joining together.

Caramel can burn very quickly. 11 Dessert Hacks that Satisfy Cravings but are Secretly Healthy. Is dessert your diet's achilles heel? Well, we have that in common. Maple-Pecan Chocolate Chip Cookies. Best Tasting Pancakes Ever! Vegan or Otherwise. Peach Crumb Bars. Peach cobbler meet sugar cookies meets crumb cake to create one delicious Peach Crumb Bar. These summer inspired dessert bars are loaded with fresh, sweetly spiced, juicy peaches and will quickly remind you of your favorite peach cobbler. Their texture is soft yet crumbly, moist (thanks to all the juice from the peaches) and slightly cake-y.

Peach Crisp with Maple Cream Sauce. I don’t know what to say. This is Gee’s recipe, and it’s so good, I…I…I feel like crying. Hold on, I’m going to go have a really good, cleansing cry. I’m back. That was awesome. And so is this dadgum dessert, people. The Cast of Characters: Fresh Peaches, Flour, Sugar, Light Brown Sugar, Cinnamon, Nutmeg, Salt, Butter, Lemon, Maple Syrup, Whipping Cream, Light Corn Syrup. Start with one cup flour. Add to a medium bowl. Now add 1/2 cup sugar… And 1/2 cup firmly packed light brown sugar. Circus Animal Cookies. Blonde Brownies I Recipe. Vegan Brownie and Bar Recipes. Ultimate is not something that I throw around lightly, especially for vegan brownies.

I've had my share of vegan and regular brownies and been baffled by how lacking vegan versions are. Growing up on my Grandmother's brownies, I learned that a good brownie should be dense, fudgy and soft; not light, cakey and dry. Why is it so hard to emulate a traditional brownie recipe that simply consists of a few simple ingredients? Hint: it's due to the egg, which emulsifies, binds, slightly leavens then bakes up as part of the actual base of the brownie itself. To emulate this takes an expedition deep into the innards of brownie science, oh and for me, about seven years of failing until figuring this out. Opera Cake. Cinnamon Roll Pancakes.

Updated 9/22/11 to Add: If you’re coming here to sample these delicious Cinnamon Roll Pancakes, you just might like the latest recipe that I’ve posted for Pumpkin Cinnamon Roll Pancakes too. Unauthorized Girl Scout Cookie Recipes. Dulce de Tres Leches. Chocolate Cake. Ok so I found this Vegan Chocolate Cake recipe and it was a HUGE hit with my family and friends. Mini Peanut Butter Cups in a Jar. Favorites. My Favourite Homemade Almond Milk + Step By Step Photos. Spiced Applesauce Cake with Cinnamon Cream Cheese Frosting: 2000s Recipes + Menus. Pull-Apart Chocolaty Vegan Bread Cake. Part cake, part bread, this recipe tastes delicious and is perfect to share with friends and family – just pull apart and enjoy! Apple Pie by Grandma Ople Recipe. Strawberry Ice Cream Pie (Gluten Free) This is a really cooling treat to have in the heat of the summer.

The filling is creamy, sweet, and full of flavor, like ice cream, even though its not made in an ice cream maker. This recipe is soy free, gluten free, dairy free and raw.