Vinod Khosla: How To Succeed In Silicon Valley By Bumbling And F. Posted by Tom Foremski - June 28, 2009 Vinod Khosla is one of Silicon Valley's most successful VCs. I was at the recent SDForum Visionary Awards where Mr Khosla was one of four winners of the 2009 awards. His acceptance speech was short and very good. Excellent advice for entrepreneurs. Judy Estrin: Silicon Valley Unwilling To Fix Structural Problems. Posted by Tom Foremski - June 30, 2009 Judy Estrin, one of Silicon Valley's top entrepreneurs, continues to sound warnings that innovation is in danger because of fundamental structural problems. 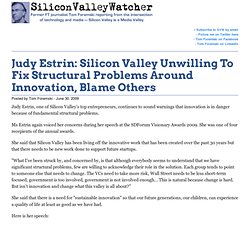 Ms Estrin again voiced her concerns during her speech at the SDForum Visionary Awards 2009. She was one of four recepients of the annual awards. She said that Silicon Valley has been living off the innovative work that has been created over the past 30 years but that there needs to be new work done to support future startups. "What I've been struck by, and concerned by, is that although everybody seems to understand that we have significant structural problems, few are willing to acknowledge their role in the solution.

She said that there is a need for "sustainable innovation" so that our future generations, our children, can experience a quality of life at least as good as we have had. Here is her speech: Thought Leader Interview: Judy Estrin on the Innovation Gap in Silicon Valley and Beyond . . . Visonary 2009: Jim Clark Was Always Looking For An Exit Strategy. Kay Koplovitz: We Need More Women Entrepreneurs. SDForum Visionary Awards - Present And Past: Before Walt Mossber. Posted by Tom Foremski - June 23, 2009 Later this week SDForum hosts its 2009 Visionary Awards and it will honor two women business leaders, Judith Estrin and Kay Koplovitz, also Vinod Kohsla and James Clark. 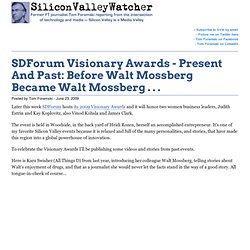 The event is held in Woodside, in the back yard of Heidi Rozen, herself an accomplished entrepreneur. It's one of my favorite Silicon Valley events because it is relaxed and full of the many personalities, and stories, that have made this region into a global powerhouse of innovation. To celebrate the Visionary Awards I'll be publishing some videos and stories from past events.

How To Succeed In Silicon Valley By Bumbling And Failing... Afterwards, I went over to congratulate him on his award and also say how much I enjoyed his speech. Rebecca Buckman, one of Forbe's top journalists, was also there. He then started to tell us a very interesting story, about how Silicon Valley VCs could have saved the newspaper industry--back in 1996. This would be very impressive because this would be before Yahoo, Google -- and way before the Internet was the Internet as we know it today.

Vinod Khosla tells Rebecca and I about a meeting with the top executives of the ten largest newspaper companies, essentially locking them inside a hotel for an entire day. He says that he and his colleagues had come up with a way newspqpers could avoid the harmful effects of the Internet on their business mode. SDForum Awards: Silicon Valley Tales. Posted by Tom Foremski - June 26, 2008 SDForum Visionary Awards are my favorite event of the year.

It's full of insiders and Silicon Valley tales. And the setting is Heidi Roizen's backyard in Woodside which provides for a relaxed atmosphere that generates some great stories. Blog Archive » Silicon Valley’s Visionaries – Oscar party for te. The only things missing were the red carpet and the paparazzi at last Wednesday’s SDForum’s Visionary Awards ceremony.

It had all the trappings of the Oscars: glitz and glamor, champagne and cocktail dresses. OK, there were more business suits than bustierres, I admit. But I think the brain power at this Silicon Valley event was probably ten to the Nth power of its LA counterpart. I kept expecting an announcer to say: “Reed Hastings is appearing with fabulous thoughts today, combining high IQ with the always elegant ideas for movie delivery.” Held at the private home of Heidi Roizen and David Mohler in Atherton, the party kicked off with a VIP only event inside the Italian villa. I chatted to Cromwell Schubarth, editor of the Silicon Valley Business Journal who reports that contrary to the fate of many newspapers, like the Merc, his paper is thriving.

Capturing the scene at the SD Visionary Awards. Once a year venture capitalist Heidi Roizen and her husband Dave Mohler open up their Woodside villa to host the SD Forum’s Visionary Awards honoring pioneers of Silicon Valley. 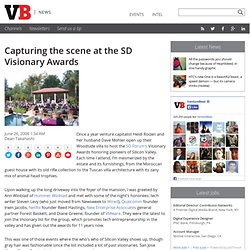 Each time I attend, I’m mesmerized by the estate and its furnishings, from the Moroccan guest house with its old rifle collection to the Tuscan villa architecture with its zany mix of animal head trophies. Upon walking up the long driveway into the foyer of the mansion, I was greeted by Ann Winblad of Hummer Winblad and met with some of the night’s honorees: tech writer Steven Levy (who just moved from Newsweek to Wired), Qualcomm founder Irwin Jacobs, Netflix founder Reed Hastings, New Enterprise Associates general partner Forest Baskett, and Diane Greene, founder of VMware. They were the latest to join the Visionary list for the group, which promotes tech entrepreneurship in the valley and has given out the awards for 11 years now. “You can imagine my regrets,” he said.

The spread was impressive. Silicon Valley Visionaries Mass in Heidi's Backyard... Posted by Tom Foremski - June 21, 2007 By Tom Foremski My favorite event of the summer is the SDForum Visionary Awards celebration at Heidi Roizen and Dave Mohler's home in Woodside. 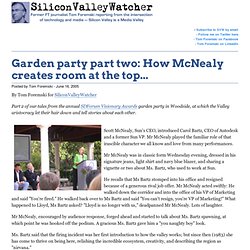 Scott McNealy, Sun's CEO, introduced Carol Bartz, CEO of Autodesk and a former Sun VP. Mr McNealy played the familiar role of that irascible character we all know and love from many performances. Mr McNealy was in classic form Wednesday evening, dressed in his signature jeans, light shirt and navy blue blazer, and sharing a vignette or two about Ms. Bartz, who used to work at Sun. He recalls that Ms Bartz stomped into his office and resigned because of a generous rival job offer. I went to a garden party....and Carly Florina was there. So was. Garden Party part three: Bill Draper, the godfather of Silicon V. Posted by Tom Foremski - June 16, 2005 . . . slams Bush administration over United Nations policy Bill Draper is a towering figure in the Silicon Valley VC community, and one of the most successful practitioners of this art.

He looked tanned and vital; and was eloquent on what makes Silicon Valley unique, and why the Bush policy towards the UN --where he served as head of the United Nations Development Programme-- is wrong. Garden Party part 4: Larry Sonsini leads valley lovefest for Car. Posted by Tom Foremski - June 17, 2005 . . . too little, a bit late Larry Sonsini, Silicon Valley's uber-uber lawyer, introduced Carly Fiorina. He said lots and lots of nice things. He noted Ms Fiorina had helped spin-out Lucent Technologies, the largest IPO in history, and she handled an extremely tough job at HP. Mr Sonsini, looking very debonair, in a well tailored light gray suit, spoke for almost as long as Ms Fiorina. "Some called it two garbage trucks colliding, but I won't say that," he said, after saying it. He was referring to a Scott McNealy quote from years back about the HP/Compaq merger. Ms Fiorina graciously took the podium and spoke for maybe ten minutes, the shortest speech of the night.

[This might seem ironic to those ex-HP-ers thrown out by the tough decisions she had to make. It was good to see Ms Fiorina celebrated by SDForum. [I have a video of her speech that I'll post as soon as I figure out how to do it!] Garden party part 5: SVW uncovers backyard plot by Microsoft loy. Posted by Tom Foremski - June 17, 2005 . . .McNealy silenced by Redmond gold? 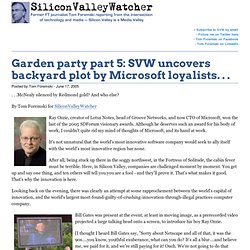 And who else? Ray Ozzie, creator of Lotus Notes, head of Groove Networks, and now CTO of Microsoft, won the last of the 2005 SDForum visionary awards. Although he deserves such an award for his body of work, I couldn't quite rid my mind of thoughts of Microsoft, and its hand at work. It's not unnatural that the world's most innovative software company would seek to ally itself with the world's most innovative region bar none. After all, being stuck up there in the soggy northwest, in the Fortress of Solitude, the cabin fever must be terrible. Visionary 1998.