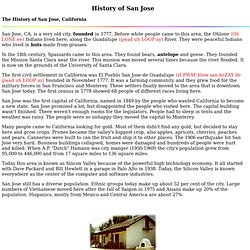 Before white people came to this area, the Ohlone (Oh LONE ee) Indians lived here, along the Guadalupe (gwad uh LOOP ay) River. They were peaceful Indians who lived in huts made from grasses. In the 18th century, Spaniards came to this area. They found bears, antelope and geese. The first civil settlement in California was El Pueblo San Jose de Guadalupe (el PWAY blow san hoZAY de gwad uh LOOP ay) founded in November 1777. San Jose was the first capital of California, named in 1849 by the people who wanted California to become a new state. Many people came to California looking for gold. New Almaden Quicksilver County Park Association. Mount Umunhum. Mount Umunhum (Ohlone, meaning resting place of the hummingbird)[3] is the fourth-highest peak in the Santa Cruz Mountains of California (after Loma Prieta, Crystal Peak, and Mt. 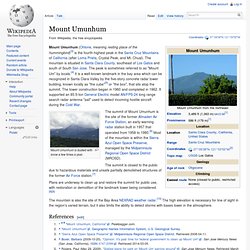 Chual). The mountain is situated in Santa Clara County, southeast of Los Gatos and south of South San Jose. The peak is sometimes referred to as "Mount Um" by locals.[4] It is a well-known landmark in the bay area which can be recognized in Santa Clara Valley by the five-story concrete radar tower building, known locally as "the cube"[5] or "the box", that sits atop the summit. The tower construction began in 1960 and completed in 1962. 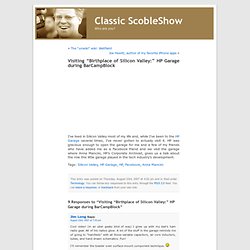 This media can be viewed at <a href=" I’ve lived in Silicon Valley most of my life and, while I’ve been to the HP Garage several times, I’ve never gotten to actually visit it. HP was gracious enough to open the garage for me and a few of my friends who have added me as a Facebook friend and we visit the garage where Anna Mancini, HP’s Corporate Archivist, gives us a talk about the role this little garage played in the tech industry’s development. Welcome to SBHRS! The South Bay Historical Railroad Society (SBHRS) was incorporated in 1985 to preserve the local area railroad heritage while running a working museum to benefit the community. 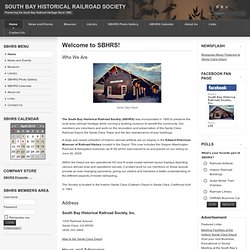 Our members are volunteers and work on the renovation and preservation of the Santa Clara Railroad Depot, the Santa Clara Tower and the two maintenance-of-way buildings. A large and varied collection of historic railroad artifacts are on display in the Edward Peterman Museum of Railroad History located in the Depot. This now includes the Oregon-Washington Railroad & Navigation business car #184 which was loaned to us and placed on our siding on June 26, 2009. Within the Depot are two operational HO and N scale model railroad layout displays depicting various railroad eras and operations venues. Constant work by our members on these layouts provide an ever changing panorama, giving our visitors and members a better understanding of the different aspects of model railroading. Santa Clara Interlocking Tower. IBM Research.