What's next for San Francisco's tech community? CNET's reporters have published a series of articles under the title "Vexed in the City" examining the pressures on housing and community caused by the expansion of San Francisco's population of tech workers. 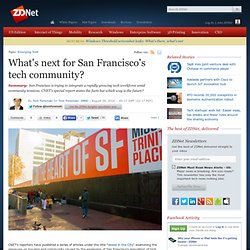 There are ten articles in the special report including an interview with Marc Benioff, CEO of Salesforce by CNET Executive Editor Charles Cooper: What's the role or responsibility of the tech industry? Benioff: Because it can be so disruptive, it has to be done with a level of compassion and awareness. And that's why I think philanthropy has such a big role. Through philanthropy, we can create models that ease the burden on those who are getting impacted.Vexed in the city: Benioff says it's time to listen to the dissenters (Q&A) - CNET The report does a good job in summarizing many of the issues that have been divisive in San Francisco and to an outside reader it will bring them up to date.

For example: [Chinese Investors Fuel California Housing Bubble | The Diplomat] Please see: San Francisco's Incredible History Of Media Innovation -SVW. Posted by Tom Foremski - January 23, 2014 The tower of the copper-clad de Young museum in Golden Gate park. San Francisco has been at the epicenter of more than just earthquakes, it has a long tradition of being at the forefront of the media industry stretching back to the gold rush. It’s where massive newspaper fortunes were started by newspaper magnates such as M.H. de Young, and more famously, William Randolph Hearst. San Francisco still has a seedy heart. This book begins and ends with walking. Its spirit is ambulatory — the product of the countless explorations I have made across San Francisco on foot. I began those wanderings more than 40 years ago, but only in the past two years have they assumed the obsessive form that has led my friends to hide when I come calling, chirpily announcing another thrill-packed excursion to the Outer Mission.

Blame it on titanium. For most of the last two decades, my knees were so shot that I could not walk without pain. You learn to work around chronic pain, but you lose certain things you are not even aware of. I should have known the great park better. It took about 20 days, walking an hour or two a day with my dog, to cover just about every part of the park. My park voyage turned out to be a dry run, an experiment on a bite-sized, miniature version of San Francisco. “Doing the Knowledge” is an expression used by London taxi drivers. I figured it wouldn’t be that hard. I had found my role model.

Tango in S.F. Bay Area. It's nearing 10 p.m. on a Tuesday night, and Valencia Street is quiet. 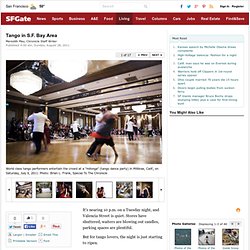 Stores have shuttered, waiters are blowing out candles, parking spaces are plentiful. But for tango lovers, the night is just starting to ripen. An Argentine bandonéon tune floats out the door of El Valenciano, where the dance floor at the far end of the bar is a kaleidoscope of twirling flowered dresses. Friends and strangers alike hug tightly, cheeks pressed together in traditional salon tango style. The tango dance party, or milonga, will continue until 1 or 2 in the morning. Outside of Buenos Aires, the Bay Area has become the hottest hot spot for what's widely known as the world's hottest dance. "It's the only dance where it's OK to hug a person before you know their name," said Nora Dinzelbacher, who began teaching Argentine tango in the Bay Area 20 years ago and now hosts the nation's largest Argentine tango teaching festival, Nora's Tango Week.

"This is my Facebook. Dancers come alone, in pairs or in groups.

Outside Lands 2011. Free & Cheap Events & Things to Do in the San Francisco Bay Area. Infinite City: A San Francisco Atlas. By Maria Popova If you love maps as much as we do, the 13th book by author Rebecca Solnit‘ (of Wanderlust fame) will make you swoon. 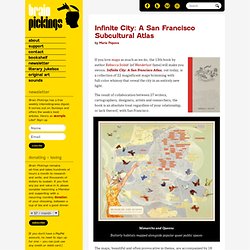 Infinite City: A San Francisco Atlas, out today, is a collection of 22 magnificent maps brimming with full-color whimsy that reveal the city in an entirely new light. The result of collaboration between 27 writers, cartographers, designers, artists and researchers, the book is an absolute treat regardless of your relationship, or lack thereof, with San Francisco. Monarchs and Queens Butterly habitats mapped alongside popular queer public spaces The maps, beautiful and often provocative in theme, are accompanied by 18 thoughtful essays that contextualize the geography depicted in insightful and unexpected ways to reveal a hidden city of thriving subcultures, political and commercial dynamics, and cross-cultural relations.

Who Am I Where? I wanted to make maps gorgeous, seductive, delicious, and beautiful again. Poison / Palate via 7×7 HT @kvox Share on Tumblr. A Toast, to the Good Ol’ Days. The Best Bowls of Soup in SF. The Big Eat 2011 - 100 Things to Try Before You Die in San Francisco. Secret recipe. The Path to Ramen Enlightenment. 8 Solid First Date Ideas. The Top 7 Super Carne Asada Burritos in San Francisco.