Royal Pingdom » How Google dominates the Web. Posted in Tech blog on October 19th, 2010 by Pingdom Google began strictly as a search company, and it’s still their bread and butter. However, as the company has grown, it’s spread its tentacles like a giant octopus out to most parts of the Web. A benevolent giant octopus, providing lots of highly useful services, but a giant nonetheless. » How Big is Google? · Security to the Core. 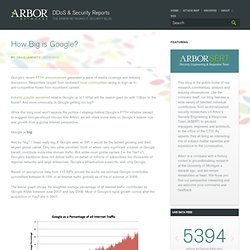 Responses ranged from exuberant local communities racing to sign up to anti-competitive howls from incumbent carriers. Industry pundits wondered what is Google up to? What will the search giant do with 1Gbps to the home? Press Center: Press Release. Enhanced Geothermal Systems (EGS) could supply thousands of times US energy needs Mountain View, California (August 19, 2008) – In the continuing effort to develop electricity from renewable energy cheaper than from coal, Google (NASDAQ: GOOG), through its philanthropic arm Google.org, announced $10.25 million in investments in a breakthrough energy technology called Enhanced Geothermal Systems (EGS). 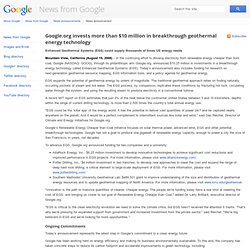 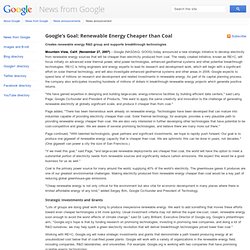 (November 27, 2007) – Google (NASDAQ: GOOG) today announced a new strategic initiative to develop electricity from renewable energy sources that will be cheaper than electricity produced from coal. The newly created initiative, known as RE<C, will focus initially on advanced solar thermal power, wind power technologies, enhanced geothermal systems and other potential breakthrough technologies. RE<C is hiring engineers and energy experts to lead its research and development work, which will begin with a significant effort on solar thermal technology, and will also investigate enhanced geothermal systems and other areas.In 2008, Google expects to spend tens of millions on research and development and related investments in renewable energy. Page added, "There has been tremendous work already on renewable energy. 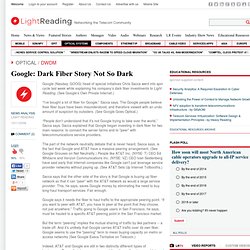 YouTube’s Bandwidth Bill Is Zero. Welcome to the New Net. YouTube may pay less to be online than you do, a new report on internet connectivity suggests, calling into question a recent analysis arguing Google’s popular video service is bleeding money and demonstrating how the internet has continued to morph to fit user’s behavior. 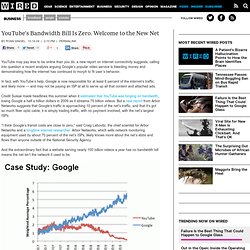 In fact, with YouTube’s help, Google is now responsible for at least 6 percent of the internet’s traffic, and likely more — and may not be paying an ISP at all to serve up all that content and attached ads. Credit Suisse made headlines this summer when it estimated that YouTube was binging on bandwidth, losing Google a half a billion dollars in 2009 as it streams 75 billion videos. Google Keeps Your Data Forever - Unlocking The Future Transparen. Posted by Tom Foremski - March 8, 2010. Think big with a gig: Our experimental fiber network. Imagine sitting in a rural health clinic, streaming three-dimensional medical imaging over the web and discussing a unique condition with a specialist in New York. 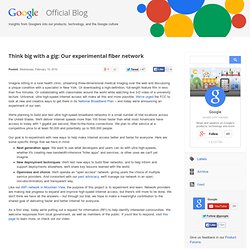 Or downloading a high-definition, full-length feature film in less than five minutes. Or collaborating with classmates around the world while watching live 3-D video of a university lecture. Universal, ultra high-speed Internet access will make all this and more possible. We've urged the FCC to look at new and creative ways to get there in its National Broadband Plan – and today we're announcing an experiment of our own. We're planning to build and test ultra high-speed broadband networks in a small number of trial locations across the United States. Our goal is to experiment with new ways to help make Internet access better and faster for everyone.

As a first step, today we're putting out a request for information (RFI) to help identify interested communities. Analysis: Google Is Building A Private Internet That's So Much B. Posted by Tom Foremski - March 17, 2010 The Internet is huge but it's a hodgepodge of hundreds of thousands of smaller, private networks, connected through thousands of Internet Service Providers (ISPs) and dozens of backbones operated by the large Telcos and service providers. 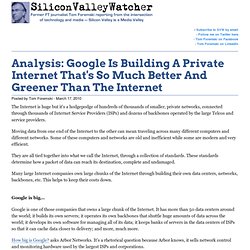 Moving data from one end of the Internet to the other can mean traveling across many different computers and different networks. Some of these computers and networks are old and inefficient while some are modern and very efficient. They are all tied together into what we call the Internet, through a collection of standards. These standards determine how a packet of data can reach its destination, complete and undamaged. Many large Internet companies own large chunks of the Internet through building their own data centers, networks, backbones, etc.