China's Internet obsession - McKinsey Quarterly - Marketing - Di. Just how big (or small) a market would Google leave behind were it to pull out of China today? 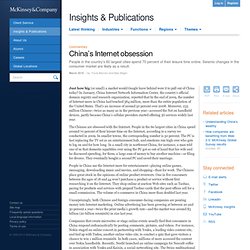 In January, China Internet Network Information Center, the country’s official domain registry and research organization, reported that by the end of 2009, the number of Internet users in China had touched 384 million, more than the entire population of the United States. That’s an increase of around 50 percent over 2008. Moreover, 233 million Chinese—twice as many as in the previous year—accessed the Net on handheld devices, partly because China’s cellular providers started offering 3G services widely last year. The Chinese are obsessed with the Internet. People in the 60 largest cities in China spend around 70 percent of their leisure time on the Internet, according to a survey we conducted in 2009. People in China use the Internet more for entertainment—playing online games, messaging, downloading music and movies, and shopping—than for work. Google CEO Sees Conclusion to China Talks Soon. Will Google's Anti-Censorship Stand Have Consequences Outside Of. Posted by Tom Foremski - March 14, 2010. 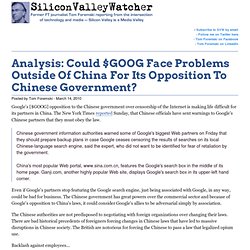 China Issues Warning to Google’s Partners. After China Move, Google Faces the Fallout. Andy Wong/Associated Press A woman lit a candle in front of Google’s China headquarters in Beijing on Tuesday after the company stopped censoring the Internet for China by shifting its search engine off the mainland. 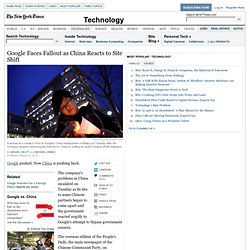 The company’s problems in China escalated on Tuesday as its ties to some Chinese partners began to come apart and the government reacted angrily to Google’s attempt to bypass government censors. The overseas edition of the People’s Daily, the main newspaper of the Chinese Communist Party, on Wednesday accused Google of collaborating with U.S. spy agencies, Reuters reported. ‘‘For Chinese people, Google is not god, and even if it puts on a full-on show about politics and values, it is still not god,’’ said a front-page commentary piece.

‘‘In fact, Google is not a virgin when it comes to values. As for Google's move, the newspaper said: ‘‘All this makes one wonder. “I don’t understand their calculation,” said J. But Mr. David M. A new approach to China: an update. Google China Withdrawal May Be Permanent, Ex-Executive Says - Bl. The Chinese flag flies outside the Google Inc. offices March 19 (Bloomberg) -- Google Inc. would probably be unable to return to China should it withdraw from the market instead of abiding by the country’s censorship laws, a former executive at the company said. 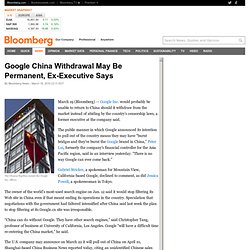 The public manner in which Google announced its intention to pull out of the country means they may have “burnt bridges and they’ve burnt the Google brand in China,” Peter Lui, formerly the company’s financial controller for the Asia Pacific region, said in an interview yesterday. “There is no way Google can ever come back.” Gabriel Stricker, a spokesman for Mountain View, California-based Google, declined to comment, as did Jessica Powell, a spokeswoman in Tokyo.

Chinese Media: Google Is Tied to U.S. Intelligence - DailyFinanc. Chinese media organs lashed out at Google (GOOG) in an apparently coordinated assault on Saturday -- with one paper suggesting Google is linked to the U.S. intelligence agencies -- just days before the Web giant may announce plans to close its Chinese-language search engine. 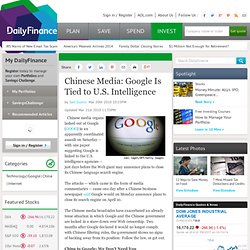 The attacks -- which came in the form of media commentaries -- came one day after a Chinese business newspaper said Google would on Monday announce plans to close its search engine on April 10. The Chinese media broadsides have exacerbated an already tense situation in which Google and the Chinese government are locked in a stare-down over Web censorship. Two months after Google declared it would no longer comply with Chinese filtering rules, the government shows no signs of backing away from its position: Follow the law, or get out. Chinese netizens' open letter to the Chinese Gove. The Chinese characters in the orange cloud above say "netizens. 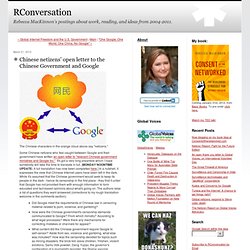 " Some Chinese netizens who feel caught between Google and their government have written an open letter to "relevant Chinese government ministries and Google Inc. " It's got a very long preamble which I hope somebody will take the time to translate in full. [MONDAY NOONTIME UPDATE: A full translation has now been completed here.] 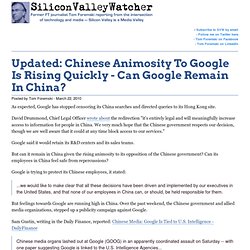 David Drummond, Chief Legal Officer wrote about the redirection "it's entirely legal and will meaningfully increase access to information for people in China. We very much hope that the Chinese government respects our decision, though we are well aware that it could at any time block access to our services. " Google said it would retain its R&D centers and its sales teams. Interview: Sergey Brin on Google’s China Gambit - Bits Blog - NY. Technology - Google to shut China search engine.

Google has drawn up detailed plans for the closure of its Chinese search engine and is now “99.9 per cent” certain to go ahead as talks over censorship with the Chinese authorities have reached an apparent impasse, according to a person familiar with the company’s thinking. In a hardening of positions on both sides, the Chinese government also on Friday threw down a direct public challenge to the US search company, with a warning that it was not prepared to compromise on internet censorship to stop Google leaving. First Opium War. The First Opium War (1839–42), also known as the Opium War and as the Anglo-Chinese War, was fought between Great Britain and China over their conflicting viewpoints on diplomatic relations, trade, and the administration of justice for foreign nationals.[3] Prior to the conflict Chinese officials wished to end the spread of opium, and confiscated around 20,000 chests of opium (approximately 1.21 million kilograms or 2.66 million lb)[4] from British traders. 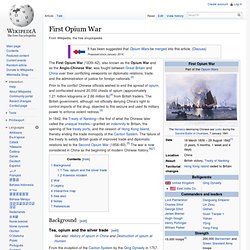 The British government, although not officially denying China's right to control imports of the drug, objected to this seizure and used its military power to enforce violent redress.[3] In 1842, the Treaty of Nanking—the first of what the Chinese later called the unequal treaties—granted an indemnity to Britain, the opening of five treaty ports, and the cession of Hong Kong Island, thereby ending the trade monopoly of the Canton System. Background[edit] Tea, opium and the silver trade[edit] A turning point came in 1834. War[edit] Letter Offers Glimpse Into Fallout if Google Goes - Digits.