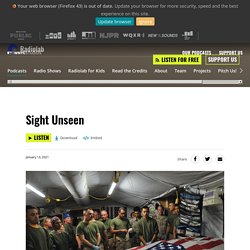 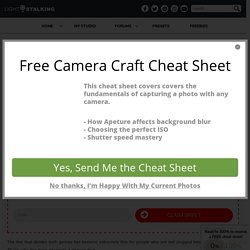 Today, our main goal is to establish a more solid concept for each genre and leave us with a clear understanding of what documentary photography and photojournalism are and are not. Claim Your Free Camera Craft Cheat Sheet Print it out and keep it for when you really need it - when you're out shooting! The line that divides both genres has become extremely thin for people who are not plugged into photography. That's why this topic deserves a deeper dive. But before we start talking about each of them, we need to recognize acknowledge that these genres usually get along very well with each other and are not mutually exclusive.

Photography and the New Deal. Between 1935 and 1943, photographers from the U.S. government’s Farm Security Administration (FSA) were assigned to travel across their country to document poverty with the sole purpose of introducing America to Americans. 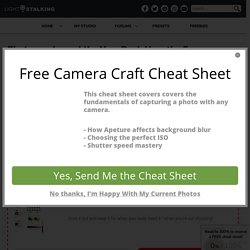 Examining the images produced during this politically driven effort best known as the “New Deal” takes us to precious levels of intimate reality. The purpose of these images was to create awareness and empathy across the entire U.S. population during these harsh times. “Through these travels and the photographs Claim Your Free Camera Craft Cheat Sheet. Through Our Eyes ProjectThrough Our Eyes Project. The Most Clever And Powerful Social Awareness Campaigns. 25 Examples of Powerful Documentary Photography. Images can be powerful. 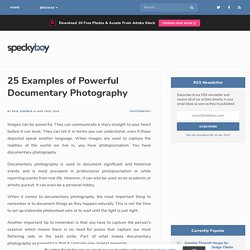 They can communicate a story straight to your heart before it can beat. They can tell it in terms you can understand, even if those depicted speak another language. When images are used to capture the realities of the world we live in, you have photojournalism. You have documentary photography. Documentary photography is used to document significant and historical events and is most prevalent in professional photojournalism or while reporting events from real life. When it comes to documentary photography, the most important thing to remember is to document things as they happen naturally. Another important tip to remember is that you have to capture the person’s essence which means there is no need for poses that capture our most flattering side or the best smile.

And it is those raw moments that trigger our emotions and make us connect with the photo, that show us what is so special about the moment, what makes the subject of the photo truly unique. Photography's Huge Impact On Our View Of The Vietnam War. A Somewhat Somber But Powerful Topic In Photography Unfortunately, the history of humanity has been violent and bloody since the beginning of time. 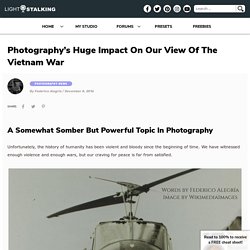 We have witnessed enough violence and enough wars, but our craving for peace is far from satisfied. Photography During The Vietnam War The Vietnam War was sandwiched between technological advances in many fields and the still-human presence on the battlefields. Because of this, we have plenty of images that portray terrible human situations in ways that dramatically influenced our perception of the war.

Claim Your Free Camera Craft Cheat Sheet Print it out and keep it for when you really need it - when you're out shooting! This will be sent to your email straight away! Many people opposed the war because of these images – and some of the most iconic ones were not even taken in conflict zones. Flower Child – Marc Riboud In fact, press agencies didn't train the photographers who were commissioned to cover the war.

Charlie Cole, the award-winning photographer of the Tiananmen Square photos. If you had been a longtime follower of this blog, you would know that Iconic Photos had repeatedly featured Tiananmen Square massacres. One photographer of that fateful event featured in IP previously was Mr. Charlie Cole, then working for Newsweek. He had first contacted me to correct something I wrote (those things have been happening alarmingly of late), and I sent him back an email with my questions and curiosities. In my previous posts, I have wrongly noted that Stuart Franklin left out of consideration for awards because he was working independently for Magnum. A third photographer, Jeff Widener of AP won the Pulitzer for the Tiananmen Photos. He remembers working with Mr. Federico Alegría. Documentary Photography: Beyond Just Taking Photographs. The documentary photography genre requires a set of skills and resources that goes way beyond simply aiming a camera, composing and exposing correctly, pressing the shutter button and publishing the resulting work after it has been transformed via a specific workflow to suit personal or editorial needs. 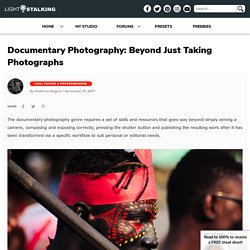 Photo by Enoch Appiah Jr. on Unsplash Claim Your Free Camera Craft Cheat Sheet Print it out and keep it for when you really need it - when you're out shooting! This will be sent to your email straight away! Let's start by defining what documentary photography is. The genre is typically developed by professional photojournalists, but as in all genres of photography, we can find extremely well-crafted work from photographers who have another way of earning their living beside photography. The Difference Between Documentary And Photojournalism After viewing various works, the thin line between documentary and journalism becomes more obvious. Photo by Peter Hershey on Unsplash. Why Storytelling is a Powerful Photographic Tool.