Bricolage. The Bedroom Cupboard – IKEA Hack (Part 1) To be honest this has been somewhat of a roller coaster of a project with a complete redesign and at least two cock-ups on my part right in the middle of building it. 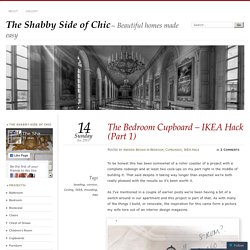 That said despite it taking way longer than expected we’re both really pleased with the results so it’s been worth it. As I’ve mentioned in a couple of earlier posts we’re been having a bit of a switch around in our apartment and this project is part of that. As with many of the things I build, or renovate, the inspiration for this came form a picture my wife tore out of an interior design magazine. The original wasn’t in a bedroom but she really liked the shape of it with open shelve’s either side and a central cupboard which we could used to store shoes. We have really high ceiling here, over 3.5 meters (12 feet) in fact, which we thought we could make good use of that with a really tall unit but it turns out there’s tall and too tall. The problem is as you can see it just didn’t work at all. Faux Barn Wood Painting Tutorial. Okay folks, are you ready for the Faux Barn Wood Painting tutorial!?... 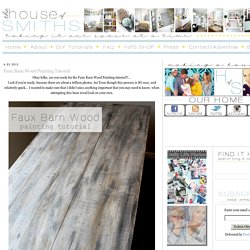 I ask if you're ready, because there are about a trillion photos. ha! Even though this process is SO easy, and relatively quick... Diy pallet decor. Thanks sooo much for the supportive response to my son’s when will this room be done still unfinished room! 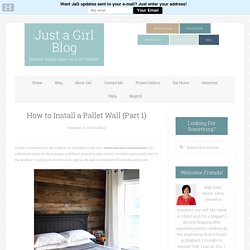 It’s by no means a difficult project to take on, but I wouldn’t necessarily say it’s the quickest—unless you have no kids and no job, and a husband with no kids and no job. Believe me when I say the internet (Pinterest, anyone?) Provided lots of inspiration for this wall. Boys bedroom. Okey Dokey. 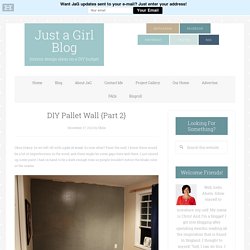 So we left off with a pile of wood. So now what? Paint the wall. I knew there would be a lot of imperfections in the wood, and there might be some gaps here and there. Vittsjö Ikea Hack… ..do good things come in two? 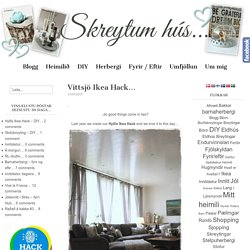 Double it! Malm console becomes a 10 people table. Dining Published on July 30th, 2013 | by IH guest Materials: Malm console, long hinges Description: If you need a long slim console table that becomes a larger table when you need it, you can follow these easy instructions: - Buy 2 Malm console tables; - Build the first one; - Take the spare legs of the second Malm and join them with the legs of the already built up table, through the hinge screwed in on the long side; - Screw both the hinges on the two legs by the same side - Take the spare desk of the second Malm and join it to the already built up desk table, screwing up the hinge by the long side and on the same side of the other 2 hinges (legs’ ones) - Done! 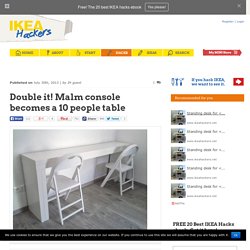 Ciao ~ Chiara, Rome The Author. Declutter your bathroom with GODMORGON and BILLY. Bathroom Published on July 29th, 2014 | by Caroline My rental house’s master bathroom seriously lacked storage space, so I bought a simple BILLY bookcase and added a door to make it look nice. 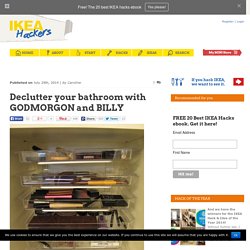 However, I still couldn’t find a good way to organize my cosmetics so that they’d all be easily accessible. Finally, after wandering around the IKEA bath fixtures department, I hit upon inspiration: the GODMORGON set of 3 acrylic storage trays. I purchased two sets of the trays. Hyllis Ikea Hack – DIY… I wanted to make a tutorial in english, due to traffic from Apartment Therapy after this Ikea hack appeared there. 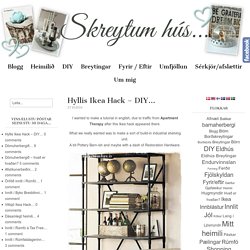 What we really wanted was to make a sort of build-in industrial shelving unit. A bit Pottery Barn-ish and maybe with a dash of Restoration Hardware. …so my solution was to buy the Hyllis units from Ikea. Super cheap, industrial looking for sure, but not very sturdy… …for this purpose we used four units. …turning them upside might seem strange, but that was the best way to get them to fit… …my husband then took each and every unit and cut them to the right length. Built-in PAX using Dry Wall Technique. Bedroom Published on May 13th, 2015 | by andre68723 Our Guest Room was quite messy with lots of stuff staying around in different Cabinets or on the floor. 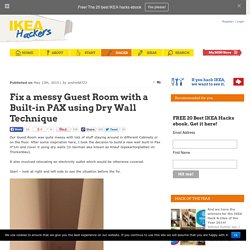 After some inspiration here, I took the decision to build a new wall built-in Pax 4*1m and cover it using dry walls (in German aka known as Knauf Gipskartonplatten im Trockenbau). It also involved relocating an electricity outlet which would be otherwise covered. Start – look at right and left side to see the situation before the fix. Starting from the left, 3 Paxes were installed, alongside the profiles also installed. PAX traditional fitted wardrobe hack. Bedroom Published on May 18th, 2015 | by reubenwilcock Our bedroom project had been on hold for months due to job commitments, and the looks coming from Mrs W were getting worse, so when work finally calmed down I figured I needed to win back some brownie points. 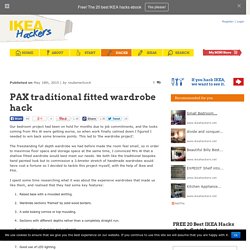 This led to ‘the wardrobe project’. The freestanding full depth wardrobe we had before made the room feel small, so in order to maximise floor space and storage space at the same time, I convinced Mrs W that a shallow fitted wardrobe would best meet our needs. We both like the traditional bespoke hand painted look but to commission a 3.6meter stretch of handmade wardrobes would have cost a fortune so I decided to tackle this project myself, with the help of Ikea and PAX. I spent some time researching what it was about the expensive wardrobes that made us like them, and realised that they had some key features:

PAX traditional fitted wardrobe hack. If you saw Monday's post you saw the "before & after" of an ugly shelving situation that I dressed up for a client's office. Today I'm expanding on that theme and bringing you a round up of all the best bookshelf DIY projects I could gather up, along with links to the tutorials for each. By far the most-hacked bookcase is the super affordable Ikea Billy ... it's kind of amazing what people have done using that as a base ... and I love that you can get really creative with mixing and matching in other Ikea cabinetry and storage furniture as well for a truly customized look. Paint the backs in a contrasting color for added visual interest ... Or paint the face of the bookcase in a contrasting color ...