Make No Mistake: After Sochi, Putin's Coming for Ukraine. Here's how one scenario might play out: Putin waits until we have all left Sochi with our ice dancing and bobsled medals in tow. 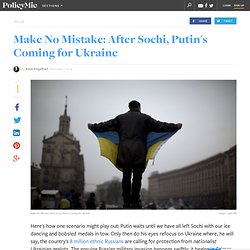 Only then do his eyes refocus on Ukraine where, he will say, the country's 8 million ethnic Russians are calling for protection from nationalist Ukrainian zealots. The ensuing Russian military invasion happens swiftly; it begins in Crimea, on the northern coast of the Black Sea. To imagine the Russian Federation using military force to stamp out Ukraine's "Euromaidan" — the mass protest movement that began in November, when Ukrainian President Viktor Yanukovych ditched a planned association agreement with the European Union — is still to engage with far-fetched fiction. Fascism. Fascism /fæʃɪzəm/ is a form of radical authoritarian nationalism[1][2] that came to prominence in early 20th-century Europe. 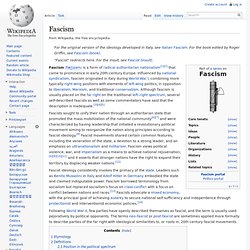 Influenced by national syndicalism, fascism originated in Italy during World War I, combining more typically right-wing positions with elements of left-wing politics, in opposition to liberalism, Marxism, and traditional conservatism. Although fascism is usually placed on the far right on the traditional left–right spectrum, several self-described fascists as well as some commentators have said that the description is inadequate.[3][4][5] Following World War II, few parties have openly described themselves as fascist, and the term is usually used pejoratively by political opponents.

The terms neo-fascist or post-fascist are sometimes applied more formally to describe parties of the far right with ideological similarities to, or roots in, 20th century fascist movements. 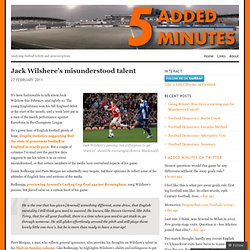 The young Englishman won his full England debut at the start of the month, and a week later put in a man of the match performance against Barcelona in the Champions League. He’s given fans of English football plenty of hope, despite statistics suggesting that the state of grassroots football in England is scarily poor. But a couple of columns I’ve read over the past few days suggests to me his talent is to an extent misunderstood, or that certain members of the media have overvalued aspects of his game. Jamie Redknapp and Piers Morgan are admittedly easy targets, but their opinions do reflect some of the attitudes of English fans and sections of the media.

Premier League imports leave English talent to wither on the margins. This season has marked a record low for the number of English players in the Premier League starting their clubs' matches on the opening weekend of the season. 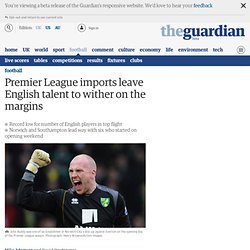 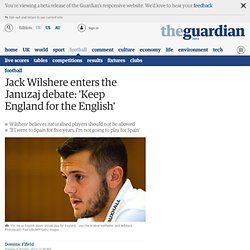 The Manchester United manager David Moyes revealed in the wake of Januzaj's eye-catching two goals in victory at Sunderland that the FA had previously been in contact with the club to establish whether the 18-year-old could play for England. The teenager was born in Brussels to Kosovan-Albanian parents and is therefore eligible to represent Belgium, Albania, Turkey, Serbia and Kosovo, who have yet to be recognised by Fifa. Belgium sought to secure his allegiance earlier this week only for Januzaj to reject the chance of a senior call-up for the World Cup qualifiers against Croatia and Wales this month, claiming the offer had come too early in his career.

Arsenal midfielder Jack Wilshere hits out at flawed selection rules: 'Adnan Januzaj must not play for England' - International - Football. Wilshere said that the rule which dictates a player can qualify to represent a country in the international game if he lives for five years in that nation after his 18th birthday was flawed and that, "if you live in England for five years, it doesn't make you English". 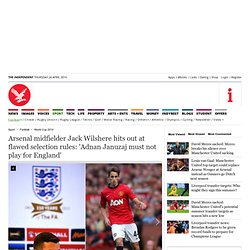 Meanwhile, Glenn Hoddle has been named in Greg Dyke's Football Association commission to solve the declining numbers of English players in the Premier League. The former England manager has not held a role at the FA since he lost his job with the national team in controversial circumstances in 1999. Dyke will announce the composition of the commission officially on Wednesday at the Leaders in Football conference at Stamford Bridge. Zanuzaj, 18, is of Albanian-Kosovan descent and was born in Brussels but has so far rejected the opportunity to play for Belgium at youth level. He could play for any of the six former Yugoslavia nations, through his father's place of birth, and Turkey, through his mother. Jack Wilshere is wrong - Mo Farah is proof we should embrace Britain's diverse society.

Has the Naturalization of International Footballers Gone Too Far? In the modern era of football, the bronze doors of opportunity are open to players from all over the world. 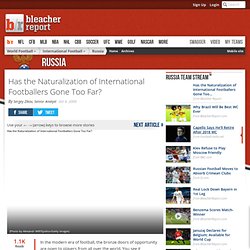 You see it constantly. Brazilians playing in Russia. Greeks playing in England. Koreans playing in France. Cameroonians playing in Holland. But while the opportunities for club football are practically endless—though many national leagues enforce a limit on foreign players—international competition is a different beast altogether. Historically, it was an incredibly simple concept. But in recent times, things have changed. While nearly every country has different regulations and requirements for naturalization, the motives are identical in every situation.

Marco Senna for Spain. At first glance, they are all Brazilians. Arsenal midfielder Jack Wilshere hits out at flawed selection rules: 'Adnan Januzaj must not play for England' - International - Football. Why aren't there more black football managers? Glance at the average football pitch and you might conclude racism in Britain's favourite sport is dead. 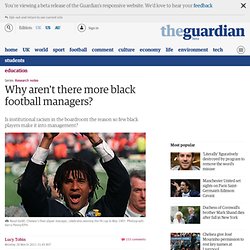 Team-sheets from the Premier League down have players of all ethnicities, and organising bodies host myriad anti-racism events. The discrimination bound-up with the game in decades past appears to be over. Until you look at the people shouting to the players. In 2007, about a quarter of all players were black, but only two out of 92 league clubs had black managers. Today, there are still only two black managers in all four leagues: Paul Ince, manager of Notts County, and Chris Powell, of Charlton Athletic.

The research, by Ellis Cashmore, professor of culture, media and sport at Staffordshire, and his colleague Dr Jamie Cleland, senior lecturer in sociology, involved 1,000 football fans, professional players, referees, coaches and managers revealing their views on the dearth of black managers. Sol Campbell: Racist attitudes mean I'll have to go abroad to coach. By Declan Warrington Published: 14:44 GMT, 27 September 2013 | Updated: 15:15 GMT, 28 September 2013 Sol Campbell believes his only chances of succeeding as a coach or manager will come from working abroad because of the 'archaic attitudes' towards black individuals that blight the domestic game. 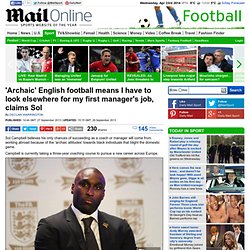 Campbell is currently taking a three-year coaching course to pursue a new career across Europe. Ambitious: But Sol Campbell believes he is being held back by his skin colour Chris Hughton, Norwich Chris Powell, Charlton Paul Ince, Blackpool Chris Kiwomya, Notts County And he told the Guardian: 'I want to start abroad. 'I've spoken to other black players who want to coach and they feel the same, that attitudes here are archaic. Racial quotas led Pietersen to leave South Africa. Kevin Pietersen has claimed that racial quotas forced him into making the biggest decision of his life, to quit his native South Africa and move to England. 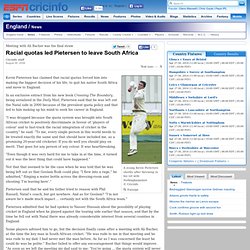 In an exclusive extract from his new book Crossing The Boundary, being serialised in the Daily Mail, Pietersen said that he was left out the Natal side in 2000 because of the prevalent quota policy and that led to him making up his mind to seek his career in England. "I was dropped because the quota system was brought into South African cricket to positively discriminate in favour of 'players of colour' and to fast-track the racial integration of cricket in the country," he said. "To me, every single person in this world needs to be treated exactly the same and that should have included me, as a promising 20-year-old cricketer. If you do well you should play on merit. That goes for any person of any colour. "Even though it was very hard for me to take in at the time, it turned out it was the best thing that could have happened.

" Itinerant striker Brian Deane relishes managerial challenge in Norway. When Brian Deane arrives to oversee morning training at Sarpsborg 08 he engages in a daily ritual which has become second nature. "Before anything else happens everybody shakes hands," he says. "Norwegians are very courteous and it shows respect – but you can also learn a lot about someone from their handshake, whether you'd want them alongside you in the trenches or if you might need to bin them! " Deane is joking but the man who, back in 1992, scored the Premier League's first goal, takes his inaugural managerial job absolutely anything but lightly. "I'm more passionate about managing than I ever was about playing," says the former Doncaster, Sheffield United, Leeds, Benfica, Middlesbrough, Leicester, West Ham, Sunderland and Perth Glory striker.