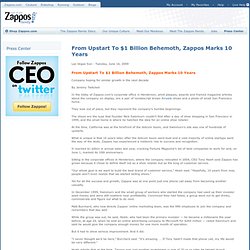 They look out of place, but they represent the company’s humble beginnings. The shoes are the type that founder Nick Swinmurn couldn’t find after a day of shoe shopping in San Francisco in 1999, and the small home is where he hatched the idea for an online shoe retailer. At the time, California was at the forefront of the dotcom boom, and Swinmurn’s site was one of hundreds of upstarts. What is unique is that 10 years later, after the dotcom boom went bust and a vast majority of online startups went the way of the dodo, Zappos has experienced a meteoric rise to success and recognition. But it had to show serious improvement. P&G’s Innovation Culture. With an introduction by Ram Charan. 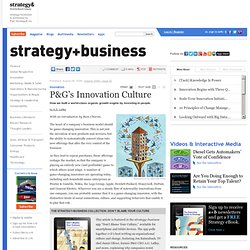 The heart of a company’s business model should be game-changing innovation. This is not just the invention of new products and services, but the ability to systematically convert ideas into new offerings that alter the very context of the business. As they lead to repeat purchases, these offerings reshape the market, so that the company is playing an entirely new (and profitable) game to which others must adapt. Three Steps to a High-Performance Culture - Carolyn Dewar and Scott Keller. By Carolyn Dewar and Scott Keller | 10:52 AM January 26, 2012 Senior executives tend to think about corporate culture as a topic that’s hard to measure and hard to change. 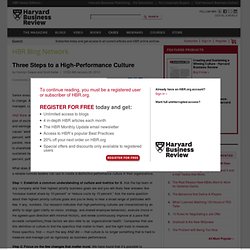 As a result, many choose not to invest in it despite all the evidence that, when skillfully managed, culture can be a powerful and enduring source of competitive advantage. ANZ Bank offers an example: a decade ago, the bank embarked on an effort described as a “unique plan of eschewing traditional growth strategies and recasting the culture of the bank to lift efficiency and earnings.” In the initial two years, the share of employees having the sense that ANZ “lived its values” went from 20 to 80 percent, and the share seeing “productivity in meetings” from 61 to 91 percent, with similar rises in the shares seeing “openness and honesty” and a “can-do culture.”

In parallel, revenue per employee increased 89 percent and the bank overtook its peers in total returns to shareholders and customer satisfaction. Cultural Change That Sticks. In the early 2000s Aetna was struggling mightily on all fronts. While on the surface revenues remained strong, its rapport with customers and physicians was rapidly eroding, and its reputation was being bludgeoned by lawsuits and a national backlash against health maintenance organizations and managed care (which Aetna had championed).

To boot, the company was losing roughly $1 million a day, thanks to cumbersome processes and enormous overhead, as well as unwise acquisitions. Many of the problems Aetna faced were attributed to its culture—especially its reverence for the company’s 150-year history. Once openly known among workers as “Mother Aetna,” the culture encouraged employees to be steadfast to the point that they’d become risk-averse, tolerant of mediocrity, and suspicious of outsiders. The prevailing executive mind-set was “We take care of our people for life, as long as they show up every day and don’t cause trouble.”

In late 2000, John W. Cultural Change That Sticks. Let's Talk About Culture Change - Ron Ashkenas. By Ron Ashkenas | 1:00 PM March 22, 2011 Editor’s Note: After reading the case, please join Ron Ashkenas in the comments section below for an online conversation about the leadership lessons that might be applied to your and others’ culture change efforts. 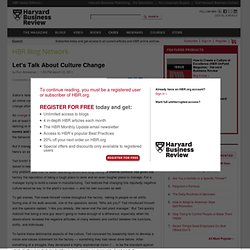 All change in organizations is challenging, but perhaps the most daunting is changing culture. There are at least two reasons for this: (1) Culture is a soft concept. If there’s no concrete way of defining or measuring culture, then how can you change it? And (2) culture represents collective norms and behaviors. But if managers want to build high-performing organizations, they need to address culture change. Ted Smith* had spent his entire career with a large consumer products company when he was asked to become the manager for one of the company’s West Coast manufacturing facilities. To get started, Ted made himself visible throughout the factory, talking to people on all shifts.