Fitbit shows impressive wellness data, but more peer-reviewed studies neededMedCity News. We don’t generally give a lot of weight to vendor-sponsored studies, but a report issued by Fitbit this week caught our attention. 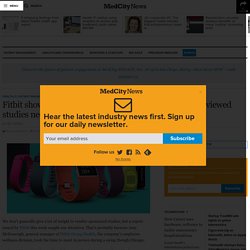 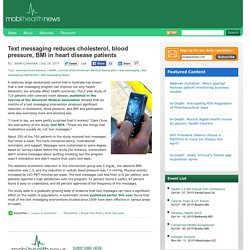 The 2-year study of 710 patients with coronary heart disease, published in the Journal of the American Medical Association showed that six months of a text messaging intervention produced significant reduction in cholesterol, blood pressure, and BMI and participants were also exercising more and smoking less. “I have to say, we were pretty surprised that it worked,” Clara Chow, the lead author of the study, told NPR. “These are the things that medications usually do, not text messages.”

About 350 of the 700 patients in the study received text messages four times a week. How The Smartphone Era Turned My Internet Shopping Mall Into A Mobile Machine. Ava Is A Bracelet That Aims To Predict The Most Likely Days For Women To Get Pregnant. Ava, a health tracking bracelet for women collects hormonal and other data in an effort to predict a woman’s period and the days of the month she is most likely to get pregnant. 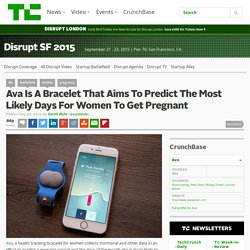 The bracelet works by monitoring slight hormonal changes in a woman’s body that are normally unable for women to see or feel. Ava said it collects over 3 million data points relating to these changes every night and then determines where a woman is in her cycle to predict her most fertile days. It collects this data from 10 different sensors – although it is not clear what those sensors are. The startup would like to reveal that information at a later time. Each of the four founders of this Swiss company, Pascal Koenig, Peter Stein and Lea Von Bidder, were attracted to the project for various reasons but all of them felt there was a better way to monitor and predict fertility than logging it on an app.

Text messaging reduces cholesterol, blood pressure, BMI in heart disease patients. Gamification Linked to Drop in Blood Pressure. September 22, 2015 Level of achievement on gamification system linked to reduction in systolic, diastolic blood pressure (HealthDay News) -- A higher level of achievements earned on a gamification system is associated with a reduction in blood pressure, according to a study presented at the American Heart Association's Council on Hypertension 2015 Scientific Sessions, held from Sept. 16 to 19 in Washington, D.C. 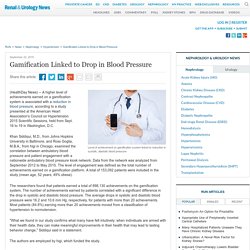 Khan Siddiqui, M.D., from Johns Hopkins University in Baltimore, and Ross Goglia, M.B.A., from higi in Chicago, examined the correlation between ambulatory blood pressure and patient engagement with a nationwide ambulatory blood pressure kiosk network. Data from the network was analyzed from September 2012 to May 2015. The level of engagement was defined as the total number of achievements earned on a gamification platform. The researchers found that patients earned a total of 898,130 achievements on the gamification system. Source. Explicit cookie consent. Patient Access to Medical Records Remains Hindered. Greg Slabodkin SEP 18, 2015 7:48am ET Patient access to their own health information continues to be a major challenge despite widespread adoption of electronic health records by healthcare providers and the availability of patient portals. 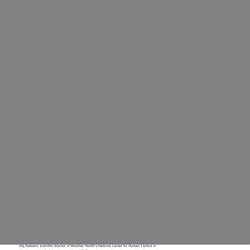 That’s the conclusion of lawmakers and witnesses who testified at a Sept. 16 hearing on patient access held by the Senate Health, Education, Labor, and Pensions Committee. “Many patients are still filling out paper forms every time they visit the same doctor and collecting their information in piecemeal fashion from each individual doctor visit and trip to the hospital,” said Sen. Organic ‘computers’ made of DNA could process data inside our bodies. We invariably imagine electronic devices to be made from silicon chips, with which computers store and process information as binary digits (zeros and ones) represented by tiny electrical charges. 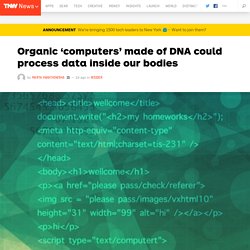 But it need not be this way: among the alternatives to silicon are organic mediums such as DNA. Organic, DNA-based computers could process data inside our bodies. Why Google is taking a closer look at disrupting health care. In its first investment since the announcement that Google would become Alphabet, Google Capital has put a major vote of confidence into the future of health care in the tech sector. 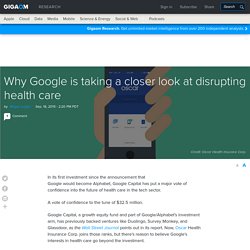 A vote of confidence to the tune of $32.5 million. Google Capital, a growth equity fund and part of Google/Alphabet’s investment arm, has previously backed ventures like Duolingo, Survey Monkey, and Glassdoor, as the Wall Street Journal points out in its report. Doctors barred from discussing safety glitches in U.S.-funded software. President Barack Obama’s stimulus put taxpayers on the hook for $30 billion in electronic medical records, many of which have turned out to be technological disasters. 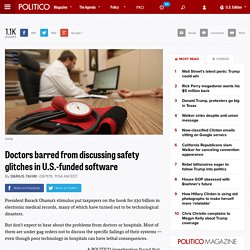 But don’t expect to hear about the problems from doctors or hospitals. Most of them are under gag orders not to discuss the specific failings of their systems — even though poor technology in hospitals can have lethal consequences. IBM Watson Health Begins To Take Shape. IBM doesn’t build new units lightly, but last April it launched IBM Watson Health. 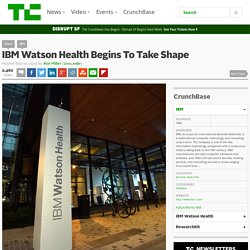 Since that time the company has been busy buying companies including Merge Healthcare, forging partnerships with the likes of Apple, CVS and Johnson and Johnson, hiring a new General Manager and purchasing the unit’s new headquarters in Cambridge, MA. That’s quite a bit of action in five months, but Steve Gold, CMO for Watson at IBM says the hope is to build a community around attacking the big problems in healthcare in the U.S. and around the world.

“It’s about how do we build a community among the various stakeholders in which all of them stand to gain by coming together and sharing information,” he said. In that sense, it hopes to work the way the open source community approaches a problem. You build a community of like-minded people to work on a common goal, and as solutions develop, businesses grow around these projects and people make money. Should You Ask Dr. Google Your Health Questions? Yes, Absolutely. For the past two decades, hundreds of millions of people around the world have done something extraordinary and unprecedented in human history. 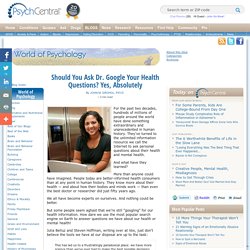 They’ve turned to the unlimited information resource we call the Internet to ask personal questions about their health and mental health. And what have they learned? More than anyone could have imagined. The Temporary Tattoo That Tests Blood Sugar for Diabetes. An electronic sensor may mean the end of finger pricking. A painful prick of the fingertip reveals a mountain of medical information for many diabetes patients. But health professionals have long struggled to find a reliable and painless way to gather blood sugar measurements. Just last year, Google announced that it was developing contact lenses that measure glucose levels in its user’s tears.

How iPhone health gadgets could change what 'see your doctor' means. Apple's Health app had a quiet rollout in late 2014, and months later many iOS users still aren't sure how the platform works on their new (or newly updated) iPhone. Sure, we've already seen a series of apps like Nike+ Running, MyFitnessPal and the MayoClinic work with the iOS-based hub for tracking personal health data, but as of now, Health's forecasted impact on the medical industry has yet to be proven.

10 Digital Health Trends Over The Next 20 Years - BIONICLY. May 21, 2014 The Digital Health Revolution is upon us. Here are the ten trends that will impact each and everyone of us in the coming years to help us live healthier, stronger and smarter lives, for longer. Earlier this week I participated in the world’s first online digital health conference, Digital Health Pulse, organized by digital health consultancy, Enspektos. Speaking at the event were some of the great and the good involved in digital health today and it was an honor to be a part of such an esteemed line-up of people.

Apple Watch Sport Review. At this point, it seems like you're in one of two camps — sporting a fitness tracker on your wrist, or in the market for one. Over the years, I've tested many different trackers to find the right one for my wrist, so when Apple asked me if I wanted to test the Apple Watch Sport ($349 and up), I was more than curious to see how this smartwatch could hold its own among the crowded fitness tracker field as well.

A few months later, I can safely say this: while the Apple Watch may look good and have many features that make life more convenient, it's definitely not on par with much less expensive fitness trackers or similarly priced GPS watches. Here's why. You Still Need Your Phone This is perhaps the biggest gripe I have with the Apple Watch as a fitness device. Startups Vie to Build an Uber for Health Care. Darren Gold had a stomach virus the first time he used an app called Heal to summon a doctor to his Beverly Hills home. He liked the Stanford-trained doctor who showed up so much that he called Heal again when his 2-year-old son had a fever, and again when the whole family had colds. The charges—$99 each for the first two visits; $200 for the family—weren’t covered by insurance, but Mr. Gold, who owns a corrugated-box company, says that was still a bargain compared with taking time off work to go to the doctor.

Dr. Google is no substitute for the real thing: Most self-diagnosers still see a physician. Medical Googlers abound in the U.S., and the latest survey from the Pew Internet & American Life Project is giving us a new look at who they are and what they’re doing with the information they find online. Oscar Is A Health Insurance Startup For Digital Natives. Augmedix, Pristine: Glass in healthcare is stronger than ever.

Healthy in a Falling Apart Sort of Way. The Future of Medicine Is in Your Smartphone. 4 Things Doctors And Hospitals Can Learn From Zappos. Epic to open its own app store. Epic is reportedly launching its own app store, opening the door for the development of mobile apps that synch with the company's EHR platform. The news leaked out of a Wisconsin Innovation Network luncheon this week and was first reported by the Wisconsin State Journal. Mark Bakken, co-founder and former chief executive of Nordic Consulting, reportedly said Epic – one of the nation's largest EMR vendors and the top provider of EMR platforms to the nation's largest health networks – would launch an app store in a few weeks that would "open the floodgates" for the development and marketing of apps specifically designed for Epic products.

Bluetooth replacement sends wireless signals through your body. Patient Empowerment: The Secret Sauce Behind 23andMe's Pipeline-In-A-Database Strategy. This year's digital health IPOs have put the market in the mood for more. Welcome to Forbes. 50 Companies That May Be the Next Start-Up Unicorns - The New York Times. Welcome to Forbes. Childhood obesity: A threat to national security. Mobile.nytimes. Meet all your new healthcare investors thanks to SEC Regulation A+ 1482_Millennials_Excerpt_v5_100314. Giving Out Private Data for Discount in Insurance. Can Digital Health Beat Human Foible? - Bionicly. Peter Thiel Invests in Anti-Aging Cure. MedCity MidAmerica Healthcare Venture Forum - MedCity News.

Health Care Needs Less Innovation and More Imitation. Why Wearables Should Be Free. When Fitbit Is the Expert Witness. Online doctor ratings may not match other quality measures. One Woman’s Drive to Revolutionize Medical Testing - The New Yorker. Doctors Tell All—and It’s Bad. The Clothes Make the Doctor. How to Protect Your Health Information. Physician entrepreneurs are in nearly half of StartUp Health's latest class of early stage companies. The new name for "patients" Error 403 (Forbidden)!!1. Craig Venter Wants to Build the World’s Biggest Database of Genome and Physiological Information.