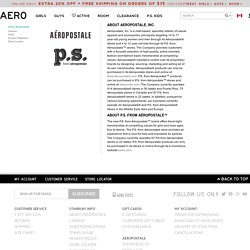 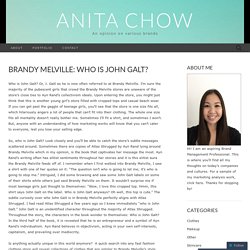 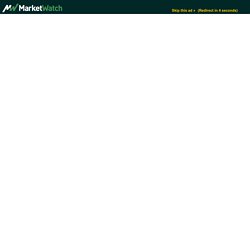 If Facebook's $19 billion Whatsapp acquisition can be attributed to one single instigator, it's teenagers. 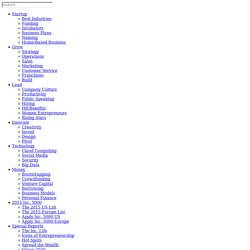 Having lost its $3 billion bid for Snapchat, and with teens consistently fleeing Facebook by the millions each year, it's clear that Facebook was willing to pay just about any price to get them back. When the world's largest social network and a major purveyor of data considers this demographic priceless, you pay attention. Today's teens are at the center of a massive turf war that's roiling the tech industry. The question is: why? What's so important about this age group and, perhaps more importantly, what are new emerging tech companies doing to lure them away?

One thing's for certain: today's teens are not doing business as usual, and in order to keep them happy, you need to do a lot more than get an endorsement from Justin Bieber. Why Teens Matter. The 10 Biggest U.S. Apparel Companies. From June 25 to July 4, we'll be examining — and at times, celebrating — all things American made, from the state of U.S. apparel manufacturing to American-born models on the rise. 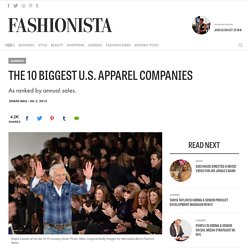 You can follow all of our coverage here. When it comes to sales, Europe’s leading fast fashion brands have the American competition almost wholly beat — Oregon-based Nike excepted. With nearly $31 billion in annual sales, driven by the unprecedented growth of the activewear market, and Nike's own strong branding and global product offering, not even H&M, which brought in around $22 billion last year, is close to topping it. Consumer & Shopper Insights. The dynamics of the apparel industry are changing dramatically. 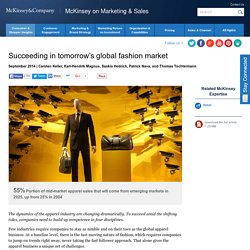 To succeed amid the shifting tides, companies need to build up competence in four disciplines. Few industries require companies to stay as nimble and on their toes as the global apparel business. At a baseline level, there is the fast-moving nature of fashion, which requires companies to jump on trends right away, never taking the fast follower approach. Leading apparel retailers in the U.S. based on sales, 2013. Search. Apparel Sales Trends By Region - npd.com. Port Washington, NY, April 20, 2015 – New York and Los Angeles are the largest U.S. markets in terms of apparel sales, but smaller markets such as Orlando and Washington, D.C. are the top markets driving both growth rate and dollar volume increases for the industry, according to global information company, The NPD Group. 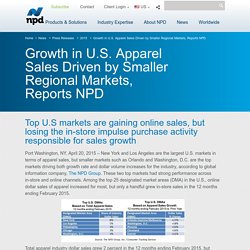 These two top markets had strong performance across in-store and online channels. Among the top 25 designated market areas (DMA) in the U.S., online dollar sales of apparel increased for most, but only a handful grew in-store sales in the 12 months ending February 2015. Total apparel industry dollar sales grew 2 percent in the 12 months ending February 2015, but sales of apparel purchased in a store declined 2 percent. U.S. Apparel Market - Statistics & Facts. The U.S. apparel market is the largest in the world, comprising about 28 percent of the global total and has a market value of about 331 billion U.S. dollar The apparel manufacturing industry in the United States employed about 104,457 people in 2010; which in retrospect seems quite miniscule for being the largest global apparel market. 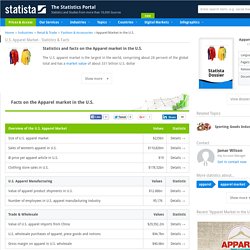 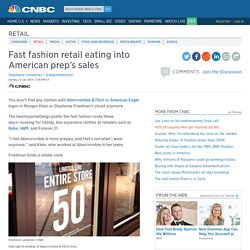 This week, Abercrombie and . Aéropostale is expected to report earnings in March. The traditional teen retailers have lost their sway, according to Wendy Liebmann, CEO of WSL Strategic Retail—a consulting firm advising retailers and manufacturers around the world. The new trend in fashion retail: teenage market. Nowadays in fashion industry there is a trend in retailing, to focus on the teen-agers market segment. 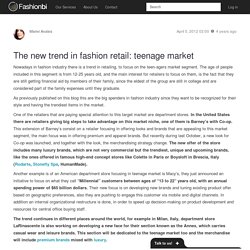 The age of people included in this segment is from 12-25 years old, and the main interest for retailers to focus on them, is the fact that they are still getting financial aid by members of their family, since the eldest of the group are still in college and are considered part of the family expenses until they graduate. As previously published on this blog this are the big spenders in fashion industry since they want to be recognized for their style and having the trendiest items in the market. One of the retailers that are paying special attention to this target market are department stores. The Ethics of Only Selling Clothes for the Very Thin. Brandy Melville Is Wildly Popular. Facebook/Brandy Melville The Italian clothing company Brandy Melville is the next hot brand in teen retail, according to a new study. The company, which sells a wide array of tiny crop tops, high-waisted bottoms, and slouchy sweaters, didn't even exist in the US until five years ago.

It still has a small store presence in the country — just 18 stores total — but thanks to a robust e-commerce business, it's now ranked No. 1 among brands that teen girls say they are starting to wear, according to Piper Jaffray's latest survey on teen spending. One Size Fits Most: SoHo Faces Consequences of Brandy Melville Effect. Brandy Girls (Photo by Brandy Melville USA/ Instagram) The notorious “one-size-fits-all” clause remains a major cause of contention within the fashion world, as it continues to creep its way onto the tags of more and more labels. The trend itself began to emerge with Brandy Melville, the wildly popular Italian brand that’s recently developed quite the cult following in the United States. Brandy Melville USA. Italian retailer Brandy Melville to open first UK store.

Brandy Melville: Instagram’s First Retail Success - Businessweek. New clothing store Brandy & Melville brings Italian style straight to Westwood. Step aside Urban Outfitters ““ fashion savvy individuals of Westwood have just received another clothing store option, imported directly from Italy, in the form of Brandy & Melville. The native Italian store could have settled anywhere in the United States but decided to introduce its clothing line straight from Italy to Westwood. Store owner Jessy Longo said, “We love this location because it reminds us a little bit of Europe, where people walk on the street. So we chose this area and are very happy with it. Brandy & Melville - About. Brandy has become a cult favorite of fashionistas everywhere. The Brandy Melville style ranges from loose fitting off-shoulder tees, to soft angora sweaters and stylish dresses, skirts and tops. Women of every age can find something at Brandy Melville to fit their style, closet and budget.

With shops throughout the European Union and in the major world capitals and cities, Brandy & Melville has become a worldwide phenomenon. Brandy Melville model Scarlett Leithold is getting daughters to spend millions. Model Scarlett Leithold was scouted at the age of just 14 at an airportHas become well-known since modeling for fashion brand Brandy Melville Obscure Italian company has gained a cult following in U.S in recent year But critics have slammed the company's 'one size fits most' policy Critics say the clothes body shame girls as most offering are very small Her profile also rose after Justin Bieber posted her picture on Instagram By Khaleda Rahman For Dailymail.com Published: 19:12 GMT, 20 September 2015 | Updated: 11:25 GMT, 21 September 2015. Teens Love Brandy Melville, A Fashion Brand That Sells Only One Tiny Size.