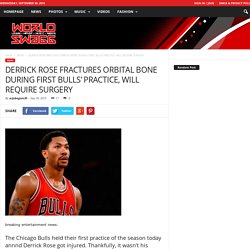 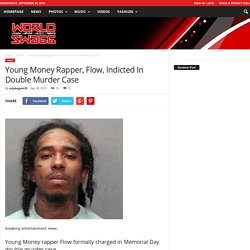 Lil Wayne protégé Widner “Flow” DeGruy was arrested Friday after he was indicted in the murder of brothers Kendrick “Muddy Cup” Bishop, 22, and Kendred Bishop, 18, in New Orleans on May 25. The New Orleans Advocate reports that Flow initially made $500,000 bail shortly after he was arrested on murder charges in July, along with a girlfriend, Jamya “Mya” Brady. Lil Wayne Bus Shooting Suspect's Lawyers Say He Had No Motive To Kill The Rapper. Breaking entertainment news: Jimmy Winfrey’s lawyers compare Lil Wayne and Young Thug’s rivalry to opposing quarterbacks. 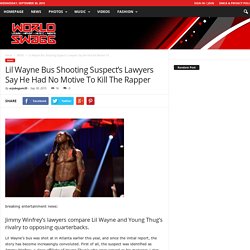 Lil Wayne’s bus was shot at in Atlanta earlier this year, and since the initial report, the story has become increasingly convoluted. First of all, the suspect was identified as Jimmy Winfrey, a close affiliate of Young Thug’s who once served as his manager. Later on, Both Thug (who was speculated to have beef with Wayne at the time) and Birdman were named in the indictment, suggesting the two conspired to have Lil Wayne killed. Snoop Dogg To Direct And Star In Football Reality TV Show. Breaking entertainment news: Snoop Dogg and AOL announce a reality show about the coaches & players of the Snoop Youth Football League. 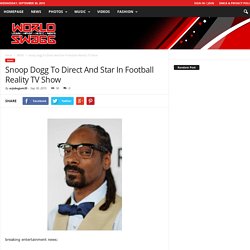 After announcing his weed-centric content platform “Merry Jane” last week, Snoop Dogg continues to flex his entrepreneurial muscles. Appearing at AOL’s Future Front on Monday, he announced that Snoopadelic Films and AOL will be teaming up to produce a reality show about players and coaches in his Snoop Youth Football League. Snoop will direct and star in the series, his second attempt to profile the SYFL after his “Coach Snoop” project was torpedoed by lawsuits in 2007. “The kids I get to mentor through SYFL means more to me than anything else I do,” he said. Founded in 2005, the SYFL has been a unqualified success, having sent several players to the NFL. 50 Cent Just Signed On To Produce More Shows For Starz. Breaking entertainment news: 50 Cent has a new 2-year deal with Starz. 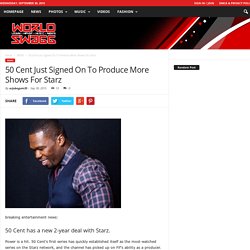 Power is a hit. 50 Cent’s first series has quickly established itself as the most-watched series on the Starz network, and the channel has picked up on Fif’s ability as a producer. Following impressive ratings in its second season, 50 has announced that he has signed a deal with Starz to produce more television. “Starz has been the perfect partner to make Power the success that it is and I am looking forward to developing many more record-breaking series with them,” he told Deadline, revealing his new 2-year contract with the channel. 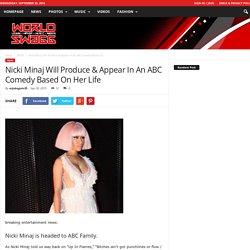 As Nicki Minaj told us way back on “Up In Flames,” “Bitches ain’t got punchlines or flow / I have both and an empire also.” From Beats Pills, to perfume, to Myx Moscato, Nicki has been expanding her brand over the last few years, and her presence on the Forbes list has reflected as much. Nicki’s latest venture was announced earlier today, following a few days of Twitter hype over a “big surprise” from the Young Money rapper. Jay Z Says TIDAL Reached 1 Million Subscribers, Announces Celebratory Event. Breaking entertainment news: Jay Z says TIDAL has officially gone platinum. 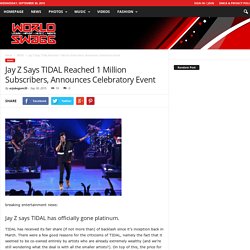 TIDAL has received its fair share (if not more than) of backlash since it’s inception back in March. There were a few good reasons for the criticisms of TIDAL, namely the fact that it seemed to be co-owned entirely by artists who are already extremely wealthy (and we’re still wondering what the deal is with all the smaller artists?). T.I. Plays "This Or That" Flo Rida - My House. Sevyn Streeter - Boomerang Video. Justina Valentine feat. Fetty Wap - "Candy Land" The lyricist Mikkey Halsted talking Cash Money Records. Hip Hop Music: Cash Money “Felt Like Real Prison,” According To Mikkey Halsted… He says Cash Money Records owes him half a million dollars. 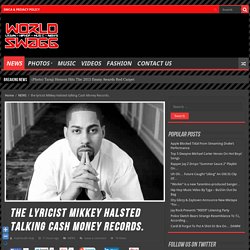 As part of a feature story for DJBooth.net, Chicago, Illinois lyricist Mikkey Halsted recalled his time spent as an artist signed to Cash Money Records. Halsted detailed the cons of being with the label, from Birdman attempting to change him as a person to currently being owed money from the label. According to the wordsmith, he was never able to “see eye-to-eye creatively” with Birdman. Shy Glizzy "Actors" Video, Goo Glizzy Feat. The Nominees For The 10th Annual BET Hip-Hop Awards. Kylie Jenner is the Queen of Kardashians. Hot Celebrity News: Kylie Jenner Destroys her sisters Kim, Kendall and Khloe in their online website… and becomes the undisputed Queen of the Kardashian/Jenner clan. 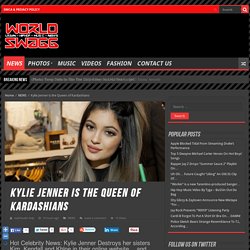 Kylie, Kim, Kendall and Khloe all launched their new pay websites this week … allowing users access to their world for the low price of $2.99/month. We found out Alaxic Smith — CEO of communly.com — poked around all 4 sites and unearthed subscriber numbers. The numbers are staggering … 891,340 people signed up for the four sites within 24-hours and here’s the breakdown: Hot Kardashian butts are everywhere ♥♥♥ Hot and Crazy Celebrities: Kylie Jenner pimped out her family — putting their asses on full display at a party where she was supposed to be the guest of honor. 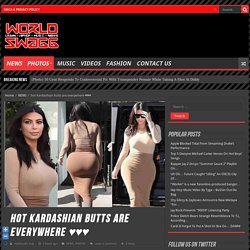 Galore Magazine threw a bash in NYC Monday night for their latest cover chick, but Kylie decided to put all eyes on her sisters — Kourtney, Khloe Kardashian, and Kendall Jenner. Well, it was really just their butts. It IS kinda the family biz, after all. Hillary Clinton’s Advice To Kanye West. Hip Hop X Politics: Recently, Hillary Clinton reveals, in Interview, her advice to Kanye West if he runs for president… Hillary Clinton recently offered Kanye West some words of advice if he decides to follow through on his promise to run for President in 2020. “Well, if I’m going for my second term, to wait four years, but if I’m not … be sure he has comfortable shoes because there’s a lot of walking involved,” Clinton said during a recent interview with Extra, according to theNew York Daily News.

Hillary Clinton met with Kanye and his wife Kim Kardashian West at a Los Angeles fundraiser in early August. According to Variety, around 250 people attended the event, which was held at the home of Justin Bieber’s manager, Scooter Braun, in the Brentwood neighborhood of Los Angeles. Frank Casino "Just Before The Riches" Video. Wiz Khalifa never forgets where he came from! Latest Hip Hop news: Wizz Khalifa donates 1700 backpacks to Pittsburgh students in alma mater, Taylor Allderdice High School and surprises them as much as his fans. Wiz Khalifa surprised students at Taylor Allderdice High School last tuesday (September 15), appearing at an assembly to honor Pittsburgh Promise students, according to WTAE.

The rapper brought 1,700 backpacks for students who are in the Pittsburgh Promise program, which provides students with high GPAs and more than 90 percent attendance an opportunity to win college scholarships. “I just wanted to tell them to be themselves,” Wiz Khalifa says. The new Miami rapper called 'Stitches' would offer $10,000 for Tyga's chain. Hip Hop Beefs: A news rapper in the Hip Hop Community calling himself ‘Stitches’ has a real problem with Tyga and places $10,000 bounty on his chain, The Miami rapper also released Tyga diss track last week. “I got ten racks on Tyga’s chain, maybe even 50,” he says in an Instagram post published by DJ Akademiks on his YouTube page. “Bring that shit to me and I’ll give you some mothafuckin’ cash. Bruh, you know I fucked your bitch, bruh. ASAP Rocky & Pharrell Discuss Cult Followings & Being Yourself.

Breaking entertainment news: ASAP Rocky & Pharrell have a conversation about foregoing trends on Beats 1 Radio. Over the last few years, it’s become clear just how far-reaching Pharrell’s influence has been. We’ve seen artists like Tyler, The Creator cite him as their biggest influence, and all the while, he’s continued to sculpt the sound of popular music through his production and his solo material. On the latest episode his Beats 1 radio show, Pharrell welcomed a student of his work, ASAP Rocky, and the two spoke of the importance of being yourself in an industry where trend-chasing is abundant. Kanye West, Nicki Minaj, The Weeknd, Lil Wayne & More Show Up To Alexander Wang's NYFW Show. Kim Kardashian keeps her shining style with her second pregnancy.

Kardashian News: Kim Kardashian’s second pregnancy style is still as fabulous as she used to be. Pregnancy doesn’t affect Kim Kardashian and doesn’t deprive her from her lovely skirts and Jeans. But, in the opposit, pregnancy made Kim discover a new style that fits her size and it’s prestigious as usual. The source: kim kardashian’s second pregnancy style. For more coverage about the Kardashians, keep visiting us daily at WorldSwagg. Marvel Reworks Album Art From Raekwon, Kendrick Lamar & Kool Keith. Nicki Minaj Hints At Possible Collaboration With The Weeknd. Stitches Claims He Slept With Kylie Jenner In New Tyga Diss Track. Chief Keef Announces "Bang 3 Hologram Fest," Will Debut "Bang 3 Pt. 2"

Plies Posts Video Of Young Thug's Daughter Using Profanity; Thug Responds With Threats. Kanye West, Nicki Minaj, Ciara & More Attend Givenchy Show At New York Fashion Week. Breaking entertainment news: Check out some photos from the Givenchy show at New York Fashion Week. Kylie Jenner and Tyga are taking their romance to New York Fashion Week! Casey Veggies Reveals Tracklist For "Live & Grow" #TBT: Swizz Beatz-Produced Bangers. Breaking entertainment news: The hottest tracks produced by Swizz Beatz from 1999-2010. When you think of club-ready hip hop music that was bumpin’ from 2000-2010, Swizz Beatz is one of the elite names that should come to mind. The Bronx producer-DJ-rapper-fashionista-artist can virtually do anything under the sun, but he was at his most potent through the aforementioned years when he was producing rap bangers for the likes of Jay Z, T.I., DMX, and many more.

Lil Herb Signs Deal With Cinematic Music Group. Lil Wayne Admits That Justin Bieber Is The Better Skate. Travi$ Scott Snapped At A Guy Who Mistook Him For ASAP Rocky. LEBRON JAMES WILL SEND EVERY KID WHO FINISHES HIS MENTORING PROGRAM TO COLLEGE FOR FREE. Kanye West Sends Taylor Swift Flowers. The Weeknd's "Beauty Behind The Madness" First Week Sales Are In. Ty Dolla $ign Is Launching The Pre-Order For "Free T.C." Next Week.

Man Shot & Killed Outside Of Lil Durk Concert In Philadelphia.