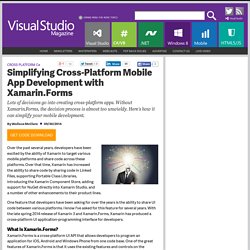 Without Xamarin.Forms, the decision process is almost too unwieldy. Here's how it can simplify your mobile development. Get Code Download Over the past several years, developers have been excited by the ability of Xamarin to target various mobile platforms and share code across these platforms. One feature that developers have been asking for over the years is the ability to share UI code between various platforms. What Is Xamarin.Forms? Pages Pages are the screens of a Xamarin.Forms application. Content Page: A content page is a fairly generic container of views and controls.

Layouts Layouts are containers for other views and containers. Stack Layout: Positions elements in a single line that may be either vertical or horizontal. Views (or Controls) Views are the UI elements users will interact with. Why Use Xamarin.Forms? Microsoft backs Java for cross-platform mobile apps. Over the years, Microsoft has not been the biggest advocate for Java, no matter how pervasive it has become. 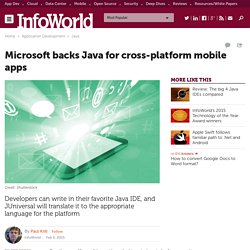 In fact, the company was entangled in a bitter legal battle over the platform with Java founder Sun Microsystems many years ago. But times have changed. Now, Microsoft Open Technologies, a subsidiary of Microsoft focused on “open” technologies and interoperability, is promoting a Java-based approach to building cross-platform mobile apps. JUniversal is a free tool for development of native, cross-platform apps in Java, as presented in a recent blog post by Microsoft Open Tech. 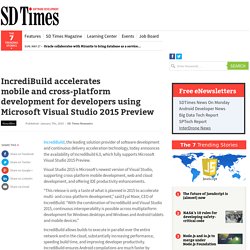 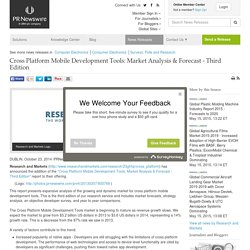 DUBLIN, October 23, 2014 /PRNewswire/ -- Research and Markets ( has announced the addition of the "Cross Platform Mobile Development Tools: Market Analysis & Forecast - Third Edition" report to their offering. (Logo: ) This report presents expansive analysis of the growing and dynamic market for cross platform mobile development tools. This is the third edition of our research service and includes market forecasts, strategy analysis, an objective developer survey, and year to year comparisons. The Cross Platform Mobile Development Tools market is beginning to mature as revenue growth slows. A variety of factors contribute to this trend: Charles Petzold is Taking on Cross-Platform Mobile Development with Xamarin. The other day, I ambled over to Charles Petzold's web site to see what he was up to, and was surprised to discover that he's signed on with Xamarin and is writing a book about cross-platform mobile software development using that company's toolset. 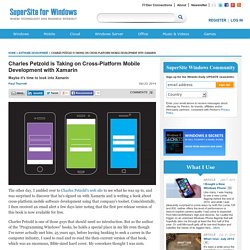 Coincidentally, I then received an email alert a few days later noting that the first pre-release version of this book is now available for free. Charles Petzold is one of those guys that should need no introduction. But as the author of the "Programming Windows" books, he holds a special place in my life even though I've never actually met him. 25 years ago, before leaving banking to seek a career in the computer industry, I used to read and re-read the then-current version of that book, which was an enormous, Bible-sized hard cover. My coworkers thought I was nuts. Over time, Mr. Telerik Targets Cross-Platform Mobile with New NativeScript Project. News Telerik Targets Cross-Platform Mobile with New NativeScript Project Mobile development tool specialist Telerik opened up its NativeScript framework to public beta, offering an open source JavaScript-based approach for cross-platform coding across iOS, Android and Windows with one code base. 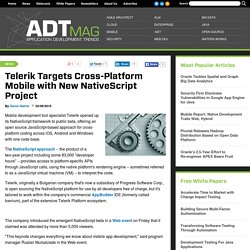 The NativeScript approach -- the product of a two-year project including some 83,000 "developer hours" -- provides access to platform-specific APIs through JavaScript calls, using the native platform's rendering engine -- sometimes referred to as a JavaScript virtual machine (VM) -- to interpret the code. Telerik, originally a Bulgarian company that's now a subsidiary of Progress Software Corp., is open sourcing the NativeScript platform for use by all developers free of charge, but it's tailored to work within the company's commercial AppBuilder IDE (formerly called Icenium), part of the extensive Telerik Platform ecosystem. NativeScript is now available on GitHub. About the Author. Visual Studio Code: A fast, lightweight, cross-platform code editor. Microsoft released its first cross-platform code editor named Visual Studio Code recently. 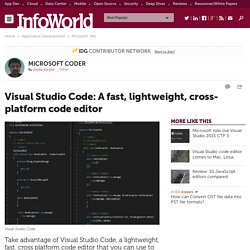 The software giant has recently launched the preview version of its fast, easy to use, cross platform code editor named Visual Studio Code. The announcement was made at the Build developer conference 2015 held at San Francisco, CA. I have been exploring this tool -- simply awesome! In this post I'll share my thoughts on Visual Studio Code. In my future posts here, I'll discuss more on how we can use this code editor to build and debug applications and leverage its features. Microsoft acquires cross-platform mobile app power with HockeyApp. Adding to its toolset for cross-platform mobile applications, Microsoft has acquired a small German software company, called HockeyApp, that has developed a service for crash analysis and beta testing of mobile applications. 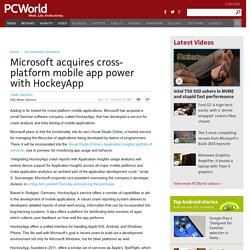 Microsoft plans to fold the functionality into its own Visual Studio Online, a hosted service for managing the lifecycles of applications being developed by teams of programmers. There, it will be incorporated into the Visual Studio Online’s Application Insights portfolio of services, now in preview, for monitoring app usage and behavior. “Integrating HockeyApp crash reports with Application Insights usage analytics will extend device support for Application Insights across all major mobile platforms and make application analytics an ambient part of the application development cycle,” wrote S. Somasegar, Microsoft corporate vice president overseeing the company’s developer division, in a blog item posted Thursday announcing the purchase. Unity, one gaming development platform to unite them all, up for sale - CNET. When World of Warcraft maker Blizzard set out to make a card game that worked on computers and mobile devices, it used tools made by Unity to help bring it to life. 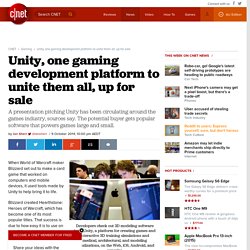 Blizzard created Hearthstone: Heroes of Warcraft, which has become one of its most popular titles. That success is due to how easy it is to use on both PCs and tablets, a big accomplishment for Blizzard since Hearthstone was its first-ever game for mobile devices. Much of the credit goes to Unity's tools, which make it easier to create games that work across devices, said Jason Chayes, who headed up production for Hearthstone. "It was a first for Blizzard to bring a game to mobile devices, and we wanted it to be a great experience," he said. Unity made that possible. Chayes and his team aren't the only ones tapping into Unity's game engine to save time and effort.