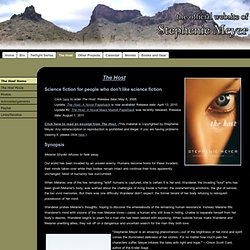 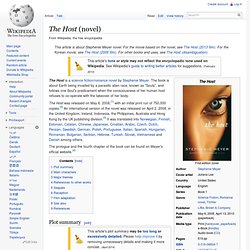 The book is about Earth being invaded by a parasitic alien race, known as "Souls", and follows one Soul's predicament when the consciousness of her human host refuses to co-operate with the takeover of her body. The Host was released on May 6, 2008,[1] with an initial print run of 750,000 copies.[2] An international version of the novel was released on April 2, 2008, in the United Kingdom, Ireland, Indonesia, the Philippines, Australia and Hong Kong by the UK publishing division.[3] It was translated into Norwegian, Finnish, Estonian, Catalan, Chinese, Japanese, Croatian, Arabic, Czech, Dutch, Persian, Swedish, German, Polish, Portuguese, Italian, Spanish, Hungarian, Romanian, Bulgarian, Serbian, Hebrew, Turkish, Slovak, Vietnamese and Danish among others.

The prologue and the fourth chapter of the book can be found on Meyer's official website.[4] Jared goes out on another raid and takes Jamie with him. Fansite with photos, videos, and more. The Host Movie News. Twilight Lexicon.