From the glory of beautiful woodland to the detail of glass slide wood collection in #DBNherbarium , there are lots of ways to study woodlands. The Xylothek ~ A Wooden Library. Rows (and Rose) of Wood! This summer the BRIT Herbarium began investigating and curating a unique collection of specimens comprised mostly from the Houston Public Museum (HPM) (now known as the Houston Museum of Natural History) collection acquired in 2001. 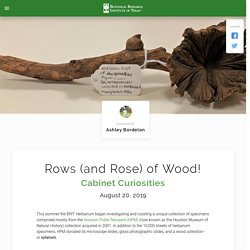 In addition to the 10,000 sheets of herbarium specimens, HPM donated its microscope slides, glass photographic slides, and a wood collection - or xylarium. This 90+-year-old xylarium is home to a variety of shapes, cuts, sizes, and species of woody plants from across the world! Unfortunately, some of these specimens lacked labels or had labels with incomplete information, leaving curators with some mysteries regarding names and provenance. Of these anonymous specimens, a handful of unique pieces of wood that appeared to be either limbs or roots were brought to the curator’s attention. What would cause the bark of a tree to create such weird shapes? This species has both male and female flowers and is primarily pollinated by the short-tailed bat.

How Kew’s wood experts solve crimes. Chronicles of the Rings: What Trees Tell Us. Those tree rings also showed that during six decades, from 1568 until 1634, there was, because of natural climate variation, six decades of expansion of the subtropics, which pushed desert climates north. 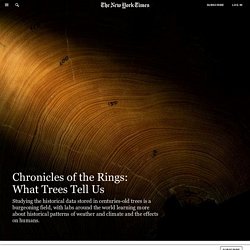 Because of expanding zones of hot and dry weather, the Ottoman Empire began to decline, the Ming dynasty collapsed and the Jamestown colony in Virginia was abandoned, suggesting, Dr. Trouet said, they were in part at least, climate-related. “The way society handles a drought politically is also part of the picture,” she said. Other sources — lake sediments; ice core samples; coral; the otolith, or ear bone, of fish; and even the shells from living and long dead geoducks, a large bivalve with a snakelike appendage — add to the broader picture. “We have divers sucking up ancient geoducks off the ocean floor,” said Bryan Black, a professor of dendrochronology who also specializes in marine organisms. 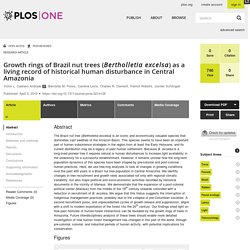 This species seems to have been an important part of human subsistence strategies in the region from at least the Early Holocene, and its current distribution may be a legacy of past human settlement. Because B. excelsa is a long-lived pioneer tree it requires natural or human disturbances to increase light availability in the understory for a successful establishment. However, it remains unclear how the long-term population dynamics of this species have been shaped by pre-colonial and post-colonial human practices.

Here, we use tree-ring analyses to look at changes in growing conditions over the past 400 years in a Brazil nut tree population in Central Amazonia. Editor: Arun Jyoti Nath, Assam University, INDIA. Kew’s tree library leads hi-tech war on illegal logging. The wooden blinds that lie crumpled in Peter Gasson’s laboratory in Kew Gardens are chipped and forlorn-looking. 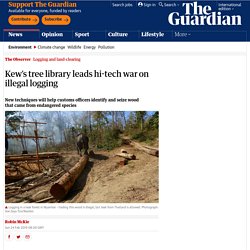 Their manufacturers had claimed they were made of pine but customs officers were wary. And their suspicions were well-founded. The trouble with travelling tree rings. Growing interest in wood libraries sees tree lovers converge at local branches. Posted A humble timber renaissance is taking place worldwide, with proponents seeking to reconnect with the natural world. 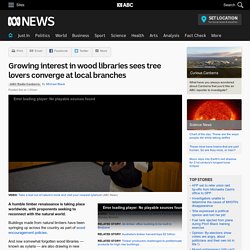 Buildings made from natural timbers have been springing up across the country as part of wood encouragement policies. And now somewhat forgotten wood libraries — known as xylaria — are also drawing in new visitors. Wood lovers get a wide sample of local and exotic timbers in the stoic shelves of the collection. Springtime for natural materials Dr Matthew Brookhouse, a senior lecturer at ANU's Fenner School, which includes a xylarium, said the resurgent interest stemmed from the tangible qualities of wood.

"When you walk into the foyer there's a rich kind of warmness that perhaps you don't receive in less natural spaces," he said. Wood collection. The wood collection was initially assembled for researching and teaching wood science, within forestry education in Australia, following the establishment of the Australian Forestry School in Canberra (1927). 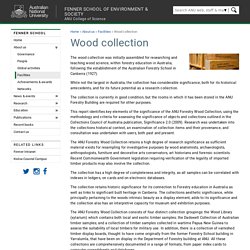 While not the largest in Australia, the collection has considerable significance, both for its historical antecedents, and for its future potential as a research collection. Tree Rings.

Index Xylariorum. International Wood Collectors Society. 52 Types of Wood and the Trees They Come From. Pacific Forestry Centre’s Forest Pathology Herbarium. The Forest Pathology Herbarium at the Pacific Forestry Centre is an internationally recognized collection of over 35,300 preserved and catalogued forest fungi and disease specimens, representing over 3,000 different fungal species, including over 140 type specimens. 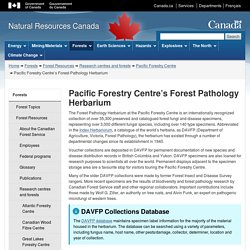 Abbreviated in the Index Herbariorum, a catalogue of the world’s herbaria, as DAVFP (Department of Agriculture, Victoria, Forest Pathology), the herbarium has existed through a number of departmental changes since its establishment in 1940. Voucher collections are deposited in DAVFP for permanent documentation of new species and disease distribution records in British Columbia and Yukon. DAVFP specimens are also loaned for research purposes to scientists all over the world. Permanent displays adjacent to the specimen storage area are a favourite stop for visitors touring the Pacific Forestry Centre.

Many of the older DAVFP collections were made by former Forest Insect and Disease Survey rangers. Grad student curatorial project: U-M Herbarium begins digitizing its wood collection. What rhymes with herbarium? 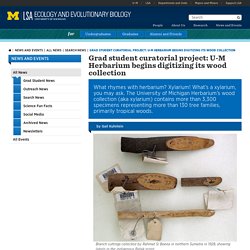 Xylarium! What’s a xylarium, you may ask. The University of Michigan Herbarium’s wood collection (aka xylarium) contains more than 3,300 specimens representing more than 130 tree families, primarily tropical woods. Most specimens are small branch cuttings, rectangular blocks, and large stem cross-sections. Jordan Bemmels, a graduate student in the Department of Ecology and Evolutionary Biology, recently undertook a curatorial project to begin digitizing the herbarium's wood collection as part of his graduate student curatorial assistantship. 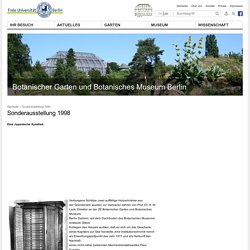 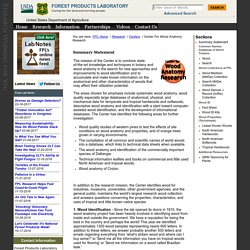 The areas chosen for emphasis include systematic wood anatomy, wood quality especially large databases of anatomical, physical, and mechanical data for temperate and tropical hardwoods and softwoods, descriptive wood anatomy and identification with a slant toward computer-assisted wood identification, and the development of informational databases. The Center has identified the following areas for further investigation: Wood quality studies of western pines to test the effects of site conditions on wood anatomy and properties, and of orange trees grown in varying environments. 1. 2. NorWood: a gene expression resource for evo-devo studies of conifer wood development - Jokipii-Lukkari - 2017 - New Phytologist. Talarico Hardwoods - Highly Figured Exotic Lumber. VENETIAN OAK ------ Own a piece of history!

In stock now, 8/4 natural edged planks and 1 millimeter thick veneer. Very limited supply. Call for pricing. - (610) 775-0400. Romeyn B. Hough. The Woodbook - TASCHEN Books. Forrest’s Rhododendron Giant – Botanics Stories. Plant Collector George Forrest (1873-1932) introduced over 300 new rhododendron species to Britain but one in particular dwarfed all of these, Rhododendron protistum, which is represented in our collection by a large slice of tree trunk, felled by Forrest and his collectors in 1931 – it may even be our largest herbarium specimen? The slice of tree trunk – just over 65cm at its widest point. Forrest referred to his find as Rhododendron giganteum – an appropriate name! He discovered both R. protistum and giganteum during his fourth expedition to Yunnan in southwest China between 1917 and 1920, but they were mistakenly identified as being different species – Forrest’s find in March 1931 changed all that. He took a sample and sent it to RBGE Regius Keeper William Wright Smith as soon as he could.

Forrest himself takes up the story: Rhod giganteum. Wooden veneers - new acquisition for timber collection @World_Museum #BotanicMonday #EconomicBotany #identification. Wood Collection / Smithsonian. Almost since its inception, the Smithsonian Institution has acquired botanical collections for scientific study. In the 1960s William L. Stern, then Chairman of the Department of Botany, played an important role in reorganizing and promoting the growth of what is now the Wood Collection of the Smithsonian's National Museum of Natural History.

In 1960 the wood collections of the Division of Agriculture and Wood Products of the Smithsonian's Museum of History and Technology (now the National Museum of American History) were transferred to the Department of Botany. These collections formed the basis for a Division of Woods, the name of which was changed to Division of Plant Anatomy in 1963. Today the Wood Collection contains ca. 42,500 specimens representing almost 3000 genera. Xylarium: Delaware State. The word “xylem” is derived from classical Greek ξυλον, xylon, “wood,” and indeed the best known xylem tissue is wood. A xylarium is a collection of authenticated wood specimens that is well-curated and accessible to the scientific community. The Peiffer Xylarium is unique among wood collections because it includes specimens that have their leaves, fruit, and scientific and common names lasered into the surface of the wood. The Peiffer Xylarium, established in 2006, is a unique, fledgling collection when compared to about one million xylarium specimens in worldwide collections: The collection began with 117 specimens catalogued in the Peiffer Xylarium.

This wood anatomy web site has over 40,000 images showing anatomical details. Note: Gymnosperm woods (softwoods) are not included. Become a fan of InsideWood on facebook to get information on additions to InsideWood, and occasional comments on how-to-use the website. Also on Twitter The Facebook photo albums listed below have slide sets with background information on InsideWood, including hints and cautions about searching the IW database.

Microscopic Wood Anatomy. Wood anatomical diversity results from force of habit, and shifts in habitat - AoBBlog. Plant functional traits constitute responses to a complex evolutionary reciprocality between plants and the environment. Vol20no1. Wood panels from the Japanese xylarium. Our mysterious treasure from Japan is restored. Spring has finally arrived at Kew. The sheets of colourful bulbs are a welcome reminder that we'll soon see the Japanese cherries flowering in the Gardens.