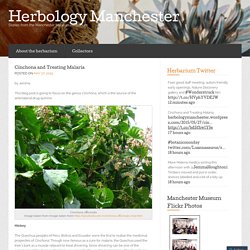 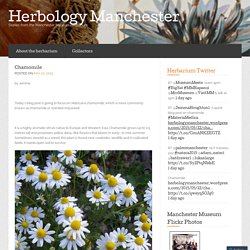 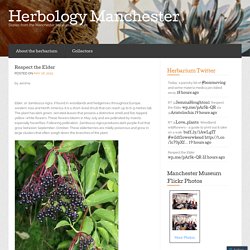 It is a short-lived shrub that can reach up to 6-9 metres tall. The plant has dark green, serrated leaves that possess a distinctive smell and flat-topped yellow-white flowers. Medicinal uses For a long time Sambucus nigra has been used for a wide range of medicinal applications. The flowers and fruit are still used in herbal medicine today for a wide range of remedies. Studies have shown that elderberries can be used to boost the immune system. Culinary uses Sambucus nigra has a wide range of culinary uses, despite being toxic in its raw form. Lemongrass. Lemongrass Posted on by Jemma Lemongrass (Cymbopogon citratus) is a dense, clump-forming grass that is found in tropical and subtropical grassland throughout southeast Asia. 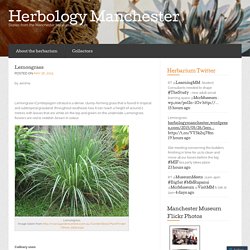 It can reach a height of around 2 metres with leaves that are white on the top and green on the underside. Lemongrass flowers are red to reddish-brown in colour. Getting Ready for #AdventBotany – here’s a reprise of 2014. Last year we ran our first #AdventBotany challenge – @DrMGoesWild and @botanyRNG writing an account each day (with some help from @DawnBazeley and others) through advent of plants associated with Christmas. 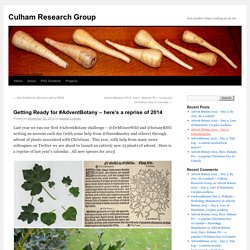 This year, with help from many more colleagues on Twitter we are about to launch an entirely new 25 plants of advent. Here is a reprise of last year’s calendar. All new species for 2015! Day 1 – A selection of Hedera helix leaves from a single plant showing adult and juvenile forms Day 2 – Viscum album in Lyte’s Herball of 1578. #AdventBotany Day 5: Walnuts. #AdventBotany Day 5: Walnuts Posted on Updated on In my humble opinion, the hazelnut is OK, but in my stocking I’ll be sure to find some walnuts. 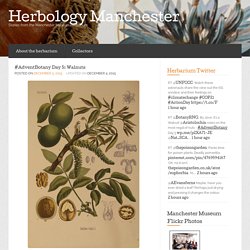 Clearly I’m not the only one to put this as the king of the nuts either, as the botanical name, Juglans regia, translates as ‘royal nut of Jupiter’. One myth has the Roman god Jupiter (also known as Jove) living on walnuts during his time on Earth. Walnuts have been used medically for centuries. ‘If taken with onions, salt and honey, they help the bites of mad dogs, or poisonous bites of any kind.’ As it grows, the nut is protected by a green, fibrous fruit which splits when the nut ripens in autumn. 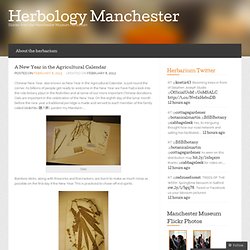 As billions of people get ready to welcome in the New Year we have had a look into the role botany plays in the festivities and at some of our more important Chinese donations. Sugar is sweet… « Herbology Manchester. Sugar is sweet… Posted on Updated on Yes, roses can be red, violets are blueish, and sugar is undoubtably sweet to taste. 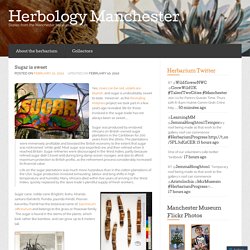 However, as the Revealing Histories project we took part in a few years ago revealed, life for those involved in the sugar trade has not always been so sweet… Sugar was produced by enslaved Africans on British-owned sugar plantations in the Caribbean for 200 years from the 1600s. The plantations were immensely profitable and boosted the British economy to the extent that sugar was nicknamed ‘white gold’.

Sugar cane, noble cane (English), Ikshu, khanda, sarkara (Sanskrit), Pundia, paunda (Hindi), Poovan karumbu (Tamil) has the botanical name of Saccharum officinarum and belongs to the grass or Poaceae family. Below are two jars of sugar which came from Tate and Lyle Ltd, Liverpool. Like this: A history of cotton « Herbology Manchester. Specimen of the day – Atropa belladonna « Herbology Manchester. Specimen of the day – Atropa belladonna Posted on Updated on by Jemma Atropa belladonna, commonly called deadly nightshade, is a herbaceous perennial (which means it lives for over 2 years and its stems die down back to the soil level at the end of the growing season) in the Solanceae family. 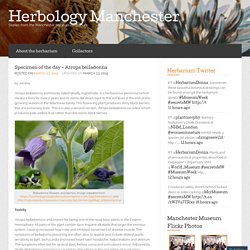 This flowering plant produces shiny black berries that are extremely toxic. There is also a second version, Atropa belladonna var. lutea, which produces pale-yellow fruit rather than the iconic black berries. Botany in Ancient Egypt – Part 2 « Herbology Manchester. Botany in Ancient Egypt – Part 2 Posted on Updated on by Jemma Part 1 of this blog post ( focused primarily on how the ancient Egyptians acquired their extensive botanical knowledge. 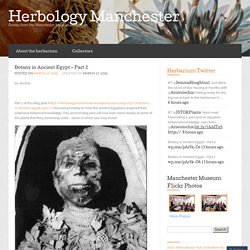 This second blog post will now look more closely at some of the plants that they commonly used – some of which you may know! One of the most well-known plants associated with ancient Egypt is Cyperus papyrus. Safflower (Carthamus tinctorius) is a brightly coloured flowering plant that has heads of yellow, orange or red. Ancient Egyptian tombs often contained baskets of juniper berries (Juniperus communis). Allium sativum, commonly called garlic, was used for both culinary and medicinal purposes by the Egyptians. Believed to have been made by the god Thoth, Papaver somniferum (opium poppy) was used medicinally as an early form of painkiller and in cooking to add flavour to baked goods like bread. Saffron: The world’s most expensive spice (part 1) « Herbology Manchester. Saffron: The world’s most expensive spice (part 1) Posted on Updated on by Jemma This two-part blog post is going to focus on Crocus sativus, also known as saffron.

Part 1 is going to focus on the plant’s history in Europe and part 2 ( will focus on its genetics, harvest and uses. Ancient Times The cultivation and trade of the saffron crocus by humans has persisted for around 4 millennia; spanning cultures, continents and civilisations. Saffron again became popular during the time of the ancient Greeks, when early documentation shows that they cultivated and harvested the plant for its spice. It should be noted, however, that Crocus sativus cultivation was not limited to Europe. Medieval Revival.